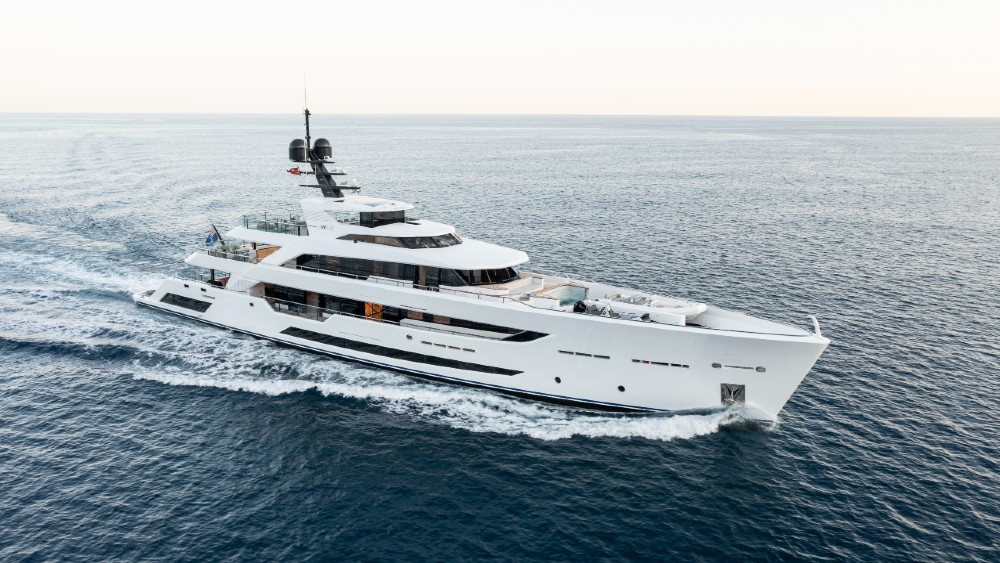 “Al Waab” translates loosely from Arabic to English as a sanctuary or place to grow and protect things. Think large garden or enclosed field. Whether the owner of the recently launched Al Waab had that translation in mind is not clear. But the team that designed the 180-footer, built by Alia Yachts, says the owner had one mission—to accommodate a family, a big extended family and lots of friends.

“He said we want the ultimate home at sea,” says Bart M. Bouwhuis of Vripack, who led the design team. “We will not go exploring, he told us, but we want to enjoy our time on the water.” The owner, asking not to be named, also mandated the boat be 499 gross tons, an interior-volume sizing that’s just shy of the 500 mark, at which point any yacht must be built to larger, ship-like regulations.

“She’s the longest yacht in the world under 500 GT,” Gökhan Çelik, CEO of Alia Yachts, told Robb Report. “That’s one thing on paper but the real-world construction was quite a challenge.” The Turkish yard was able to complete the build, from the signed contract to delivery, in just 25 months. That’s unusually fast for any custom project, especially if you add Covid and supply-chain issues into the mix.

The main salon’s light decor, floor-to-ceiling windows and a see-through partition to the dining room are representative of the rest of the yacht.  Courtesy Pozitif Studio

Sub-500-GT yachts are becoming increasingly popular as owners want to maximize interior space. But if the yacht is only 100 to 150 feet long, as many are, the result is often a bloated exterior that doesn’t look great and suffers in seaworthiness. Vripack decided to stretch the hull to 180 feet to give it a handsome, svelte profile, while maximizing the interior and exterior spaces.

“We actually had volume that we gave back to the owner because it required smaller engines and fuel tanks,” says Bouwhuis, noting there are six guest staterooms on the lower deck, and a master suite on the main deck. “We decided to approach the design holistically by combining the interior and exterior into a more flowing pattern.”

That meant big, sweeping windows and doors, multiple open decks, and even bamboo ceilings extending from the main salon out to the rear cockpit that serve as a bridge between inside and out. The Middle Eastern owner wanted a contemporary yacht with a modern sensibility, something that was forward-looking and not displaying his culture. “He didn’t want some sort of gallery, but a yacht that was calm and friendly,” says Bouwhuis.

The designers paid close attention to lighting the yacht. Notice the hundreds of tiny LED lights embedded into the rear panel for a starry-night effect.  Courtesy Pozitif Studio

The four-deck exterior has a conventional profile with straight lines, and much of the area is open. The oversized, enclosed swim platform at the transom cuts deep into the stern, with outer gunwales protecting the sides, so it’s much larger than a typical superyacht this size. It also connects nicely to the gym inside the beach club.

All exterior spaces, said Bouwhuis, have different layouts and functions, per the owner’s orders. “He just didn’t want a repeat of any of the decks below,” he says.

The swim platform has enough space for a large group sitting around a circle, and multiple chairs at the bar. On the unusually large sundeck is an outdoor galley, complete with ice-cream machine, and lounges overlooking the stern. On the deck below are groups of large sofas that connect to an indoor lounge. “The owner wanted people to be able to come and go,” says the designer. “The idea is to have multiple spaces where everyone can have their own little retreats.”

Seamless transitions between the interior and exterior were important to the owner, who wanted a home on the water.  Courtesy Pozitif Studio

Çelik says melding the interior and exterior, as Al Waab does, is becoming more common. “When you limit gross tonnage and relate that to the length, as we did with this yacht, you can create amazing use of spaces,” he says. “This combination of indoor and outdoor living is now very attractive to clients.”

The owner was also very specific on one feature that often gets overlooked: The lighting. Most renderings from other design firms showed the boat during daylight hours, dominated by sunlight filtering through the windows. Al Waab’s owner wanted to know how Vripack would handle lighting the boat at night, when the family was living inside.

Bouwhuis says lighting is usually a standard exercise—“one-two-three you’re done”—but this suddenly required research into different forms of lighting, reflection points of different surfaces and how to employ lighting that is not obvious or ostentatious. “We had to play with the light to create warm glows, not spotlights,” he says. “We avoided high-gloss surfaces and instead used super-matte finishes.”

That included the bamboo ceiling to provide a cozy, warm atmosphere, while diffusing the light at night. Embroidered leather is used in other sections, such as the wall behind the breakfast nook.

The design team even got flashy and subtle with a colorful acrylic wall that divides the main salon and stairway. The yard embedded hundreds of tiny LED lights into the panel, so it looks like sparkling stars at night, and but turned off during the day, it’s an artsy conversation piece.

In the end, the many components come together in what should be a showpiece launch for the shipyard—its second largest ever.

Each deck was designed for different uses. The huge swim platform at the bottom allows a large group to be near the water. The top skydeck has a full-featured outdoor galley and ice-cream machine.  Courtesy Pozitif Studio

”The owner was really delighted by the volume and sense of open space,” says Francesco Pitea, CEO at SF Yachts, the owner’s rep for the project. “The amount of outdoor space and diversity of the layout makes a big difference to his enjoyment of the yacht. It truly is a home at sea.”