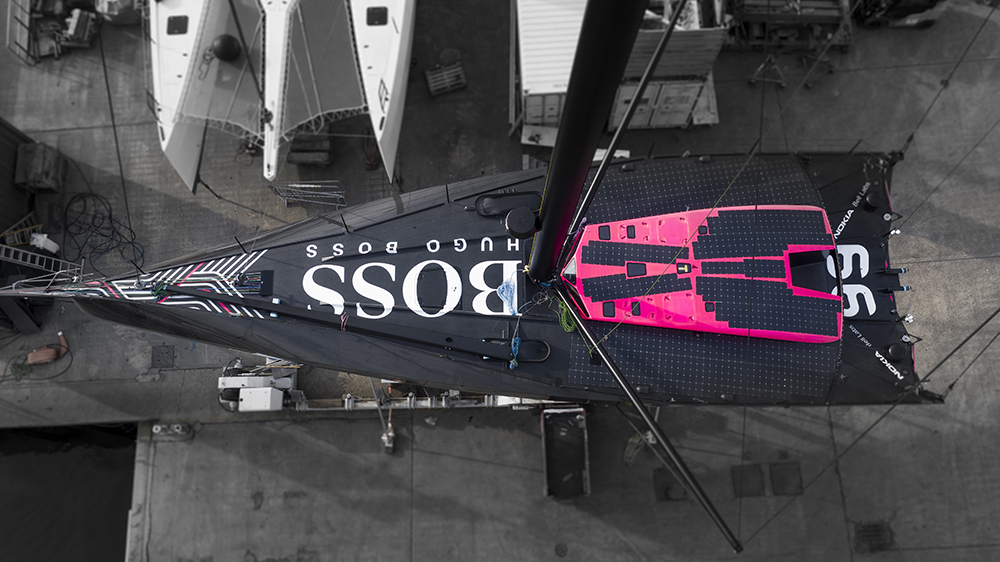 The IMOCA vessel was spearheaded by world-renowned boatbuilder Jason Carrington back in 2018 and designed in partnership with the Alex Thomson Racing team and the French architects at VPLP. According to the company, it took two full years of work—approximately 50,000 hours of specialist construction and the effort of more than 100 workers—to complete the revolutionary racing yacht, which may explain the £5.5 million ($6.7 million) price tag.

Hugo Boss—the moniker given to all six of the team’s previous vessels—is a state-of-the-art carbon fiber yacht which weighs around eight tons and features high-tech hydrofoils. Solar paneling runs along the deck and coach roof—an addition aimed at allowing the team achieve its second mission of sailing around the globe without the use of fossil fuels.

“We innovate, we push boundaries and we’re not afraid to do things differently. We accept that, in doing so, we might not always be right. But we are certainly not afraid to explore things that have never been done before,” Alex Thomson said as Hugo Boss hit the water for the first time.

To be sure, the yacht cuts a sharp profile, which seems only fitting given the team’s stylish title partner. The sleek carbon hull and the streamlined bow are finished in a distinctive, glossy black and creates an arresting contrast with fluorescent pink accents on the roof, keel, and rudder. The bespoke hue—a first for IMOCA—was devised by industrial designer Karim Rashid, the man orchestrating the brand identity of the boat.

“This sport is no longer just about qualified naval architecture and competent ocean racing,” said Thomson Racing CEO Stewart Hosford. “It’s a design and engineering challenge at the highest level. It’s about bringing together the best in the world in every single area, in the relentless pursuit of excellence, of perfection.”

The yacht will now undertake a sea trial period before its officially launched and christened in September. From there, it will debut in the double-handed Transat Jacques Vabre race in October. Godspeed, Hugo Boss.

Check out more pictures of the boat below: