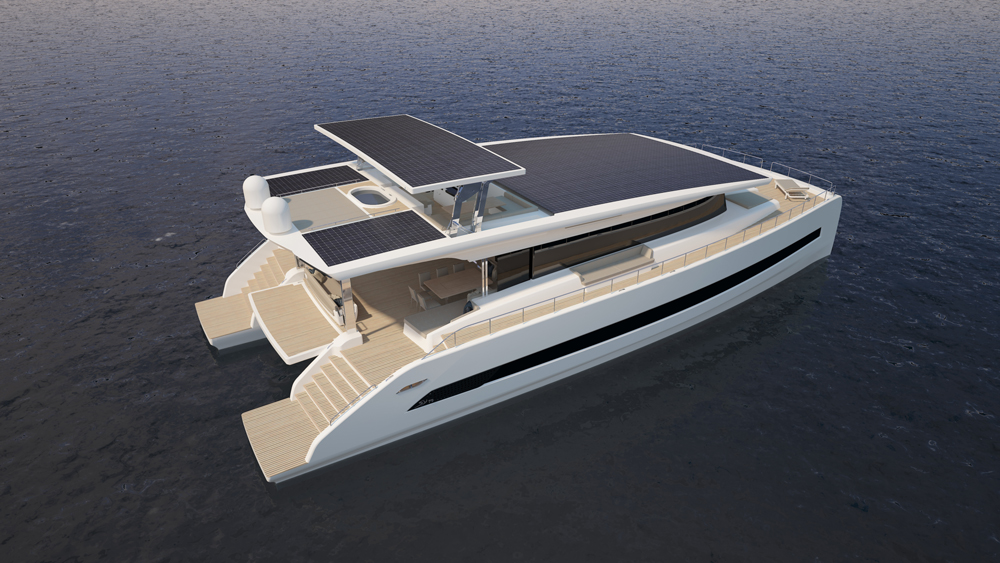 We recently gave you a peek at Silent Yachts’ Silent 55 catamaran that was on display at this year’s Cannes Yachting Festival. But the 55 isn’t the only model that the Austrian boatbuilder is working on: The Silent 79 is not only under construction, but there are already two buyers lined up to take delivery of the first yachts when they are completed in 2020. Three of the yachts are currently being built in Italy at a shipyard located not too far from the country’s shipbuilding nexus in Ancona.

All-electric and hybrid designs are increasingly popular options for new yachts, including 260-foot superyachts, but an electric power plant in a ship this size is especially appealing. Like its smaller sibling, the 79-foot yacht is marked by a large array of 70 highly efficient photovoltaic panels on its expansive roof that can reach a peak power output of 25,000 watts. This lets the yacht generate enough power to not only run onboard systems—such as lights, refrigeration, water heating, etc.—but also power the propulsion system, meaning it can operate completely emissions-free. And have no fear of being stranded at night or during heavy cloud cover—the yacht has lithium-ion batteries (the same as those used in Tesla cars) that can store up to 240 kWh of energy. If things really get dodgy, there is a generator on board that can be used to recharge the battery in emergency situations.

The yacht can cruise at six to seven knots using only electrical power, and an optional motor upgrade can bring the yacht to a top speed of 20 knots. However, if you’re not as concerned with the environment or saving on fuel costs, you can also get a version of the yacht that relies on two 200 hp diesel engines supported by two 20 kW electric motors.

The yacht is available in a number of different layouts, but the standard configuration features a large main saloon with a galley, lounge, and dining area. Belowdecks, the yacht can be equipped with four to six bedrooms, though the layout we saw had four: an owner’s cabin, a VIP cabin, and two guest cabins—all with en suite bathrooms.

While two of the Silent 79s being built are already accounted for, there is a third under construction that still needs an owner. The yacht starts at about $3.88 million, but the satisfaction from knowing you’re not contributing to carbon emissions may be priceless.