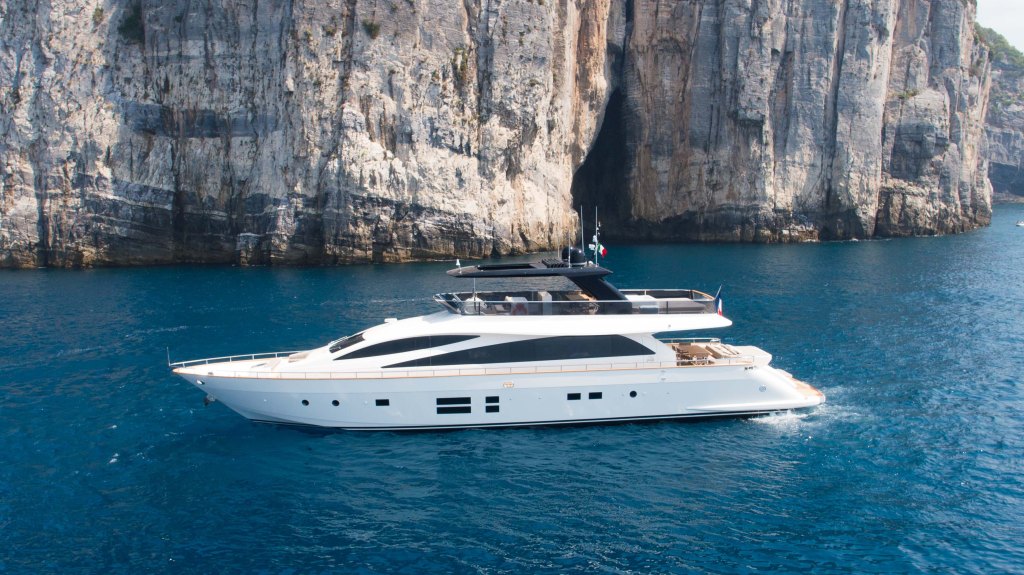 The new Amer 94, the latest in Amer Yachts’s Save the Sea yacht series, was launched in late June from the Permare shipyard in Viareggio, Italy.

The Italian design was the first superyacht to be powered with three Volvo Penta IPS 1200 engines, giving it speed, fuel efficiency, and, best of all, more interior space. The IPS drives take up less space than traditional straight-line shafts, so Amer was able to create a five-stateroom layout that is much larger than many other yachts in its class.

A 94-foot superyacht reaching 29.3 knots is virtually unheard of, but being able to run at about 1 gallon per mile at 9.2 knots is equally unusual for a boat this size. At top speed, fuel consumption is about 4 gallons per mile or 125 gallons per hour. The bottom line is that the Amer 94 is about 30 percent more fuel efficient than traditional engine packages.

Beyond its performance attributes, the Amer 94 is a beauty, with a sleek profile and black hardtop. The flybridge, extending over the stern, is large and well proportioned, with an opening hardtop, lounges, sunbeds, and a wet bar. The bow also has a lounge etched into the forward superstructure, providing privacy and security. The main deck is a social enclave, with a cockpit table for alfresco dining that can be connected to the lounges in the aft part of the saloon to expand the party.

A formal dining table at the other end of the saloon seats eight people. The galley is forward, and just forward of that is the helm, with a separate lounge on the portside.

Dining area with saloon in the background.  Photo: Roberto Catto/robertocatto.it

Perhaps the most cutting-edge design in the Amer 94 is the five-stateroom layout on the deck below. Amer took an innovative look at possible configurations and created three full-beam suites that are roughly the same size, with two twin cabins. This unique layout works exceptionally well for owners who like to treat family and guests as equals. Permare was also able to reduce noise and vibration by 50 percent, so the Amer 94 is as quiet inside as it seems from the outside. The yacht will be shown at the Cannes Yachting Festival and Genoa International Boat Show.