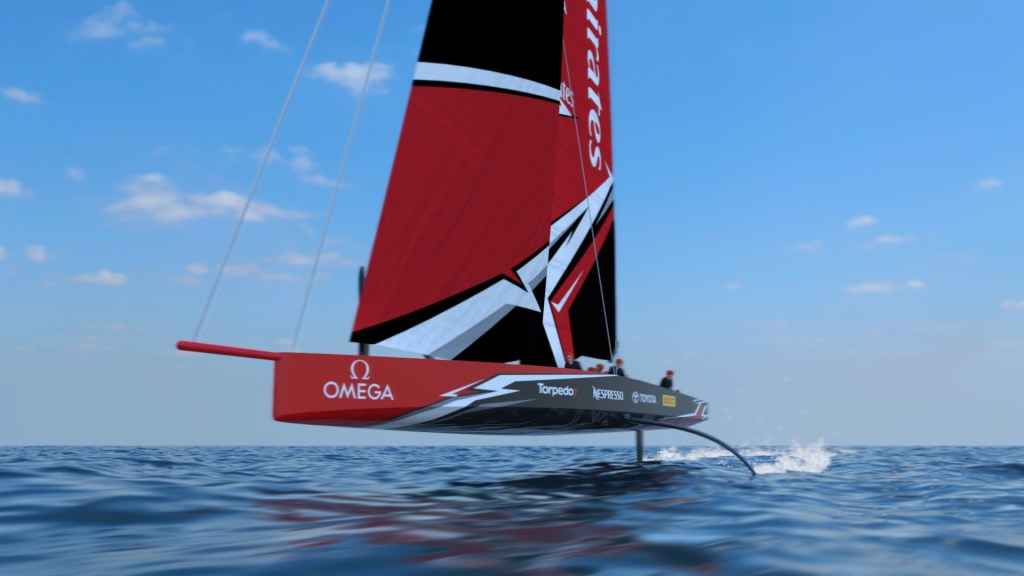 Emirates Team New Zealand (ETNZ), the victors of last summer’s America’s Cup in Bermuda, released one of the most radical racing boat designs in the Cup’s 166-year history. Designed jointly with competitors Luna Rossa, the AC75 is a monohull with no keel. The 75-foot racing machine will use twin foils for speed and maneuverability.

“We wanted to see how far we could push the performance of monohull yachts to create a foiling boat that would be challenging to sail and thrilling to match race,” says Dan Bernasconi, design coordinator for ETNZ.

While the final class rule will not be published until March, the AC75 could well be the official replacement of the AC50 catamarans used in Bermuda. Those boats, while smaller than the previous AC72 class that fought for the Cup in San Francisco, never gained much popularity among the teams. They were made-for-TV boats, showing the fast-paced excitement of match racing along shorter racecourses that maximized turns and bursts of speed.

Several syndicates like Luna Rossa said it would not participate in another cat fight, so the designers were forced to go back to the drawing board for a monohull that would still deliver the thrills of the racing cats. The foils used on the catamarans seemed to point the way. “Our analysis of the performance of the foiling monohulls tells us that once the boat is up and foiling, the boat has the potential to be faster than an AC50 both upwind and downwind,” notes Grant Dalton, CEO of ETNZ.

The AC75s will have the same speed and turning abilities as the cats, but will necessitate greater sailing prowess and have the ability to be righted if they capsize. “The AC75 will be an extremely high-performance yacht, challenging to sail, and will require an athletic and very talented crew,” says Max Sirena, team director of Luna Rossa Challenge. “Every crew member will have a key role both in the maneuvers and in racing the boat. The tight crossings and the circling in the pre-starts—part of the America’s Cup tradition—will be back on show, but at significantly higher speeds.”

The new boats will also provide “trickle-down” technology to other racing classes, something that many analysts said the AC50 boats did not deliver to the sailing world. “This concept could become the future of racing and even cruising monohulls beyond the America’s Cup,” says Dalton. “They won’t be just challenging and demanding to sail, but they’ll also reward the top skill levels of the crews.”