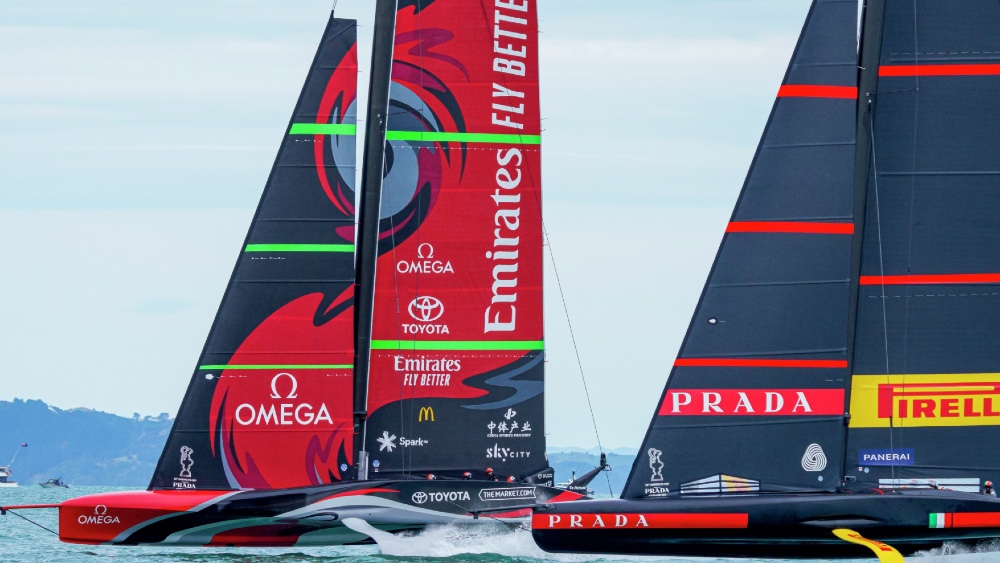 The first two races of the 36th America’s Cup in New Zealand got under way on Wednesday with an exciting, and somewhat unexpected outcome: Each team won one race. The Defender, Emirates Team New Zealand, won the first race by 31 seconds. The Challenger, Luna Rossa, won the second by just seven seconds.

The 75-foot AC75 foiling yachts—considered the fastest and most complicated raceboats in America’s Cup history—raced in wind speeds of 10 to 12 knots. But because of the high-tech sails and the foils—which raise the boats out of the water—the Defender was able to reach a pre-start zone speed of 44 knots and was first over the start line. The Kiwis kept that lead during the three-lap race, made no mistakes, and crossed the finish line first after 23 minutes of racing.

In the second race, Luna Rossa was first over the starting line. The team also sailed flawlessly, finishing seconds ahead of the Defender, though the Kiwis made up the gap in the last two laps. The races seemed to validate one general prediction about the Cup: The first boat across the starting line will win the race. But it also proved another claim by race pundits false: Luna Rossa’s boat was expected to be slower than Emirates New Zealand’s, but it kept up with the Kiwis in both races.

The two boats were evenly matched in speed, so winning came down to sailing skills.  Courtesy Studio Borlenghi

“We just followed our plan, kept it calm and the boat did the rest of the work,” Luna Rossa co-helmsman Jimmy Spithill said after the race.

The relatively even speed of the two boats signals that the America’s Cup will come down to sailing skills, which is the ideal scenario for spectators of the race series. The first team to score seven wins will be named the next America’s Cup winner.

The AC-75s are the fastest, most technical sailing yachts in America’s Cup history. One was clocked at more than 60 mph.  Courtesy Studio Borlenghi

The three-year lead up to the America’s Cup series involved three teams from different countries competing for the Challenger position, which Luna Rossa won by first defeating the US team, NY Yacht Club American Magic, and then Ineos Team UK.

In the last year, sailing’s most famous race has been hampered by Covid-19. The pandemic forced the cancellation of promotional events and pre-Cup races in the US and Europe, while teams also had to revamp their training regimens.

The next two races are scheduled to take place on Friday, March 12, with four more races scheduled for Saturday and Sunday.