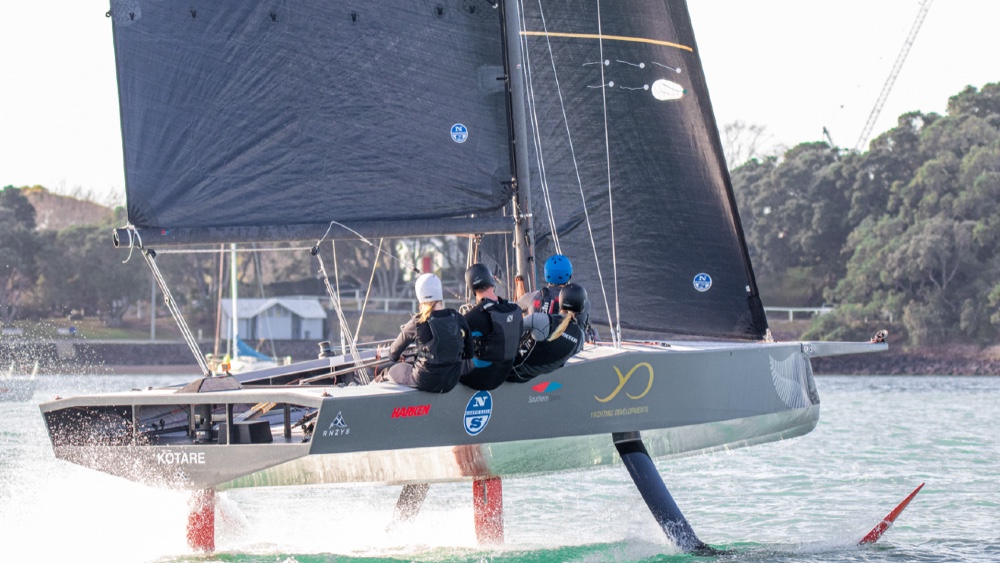 The 2021 Youth America’s Cup took a big step forward with the successful sea trials of the event’s first boat. The AC9F, a 29.5-foot-long foiling monohull, was designed and built by Yachting Developments in New Zealand. It reaches a top end of about 23 mph. It’s a smaller, slower and safer version of the America’s Cup AC75, the 75-foot foiling monohull with 11 crew that will sail in the 2021 America’s Cup. It can reach speeds of more than 60 mph.

In the Youth America’s Cup, AC9F racing yachts will be crewed by two males and two females, from 18 to 24 years old. Announced last December, the event quickly attracted 15 teams from 12 countries, including two from New Zealand, where it will be held, two from Australia, two from Switzerland, as well as single teams from the US, China, Italy, U.K., Spain, Russia, Argentina, Hong Kong, China, Denmark, and Germany. The number is far higher than the five teams competing for the adult America’s Cup.

The 23-foot foiling monohull is a mini-version of the much larger and faster 75-ft. AC75.

“I am blown away by the interest,” said Hayden Porter, CEO of the Royal New Zealand Yacht Squadron (RNYZYS) which, along with Team New Zealand and China Sports Industry Group, is sponsoring the youth event. “Once people also see the AC9F sailing, the global interest level will step up a notch. Being an event with gender equality at the forefront has also proven to be popular and something that was important to us from the start.”

The first AC9F, Kōtare or “Kingfisher” in Maori, was launched in March, but the testing was delayed for months because of Covid-19 protocols. New Zealand last week announced it was opening up the country.

“We still have more testing to complete but after her first sail it is good to confirm that she certainly flies,” says Ian Cook, managing director of Yachting Developments.

The AC9F will have four sailors–two males and two females–that will use the experience they gain on the foiling monohull as a springboard to future America’s Cups.

The most recent 2017 America’s Cup used AC62s, a 62-foot wingsail catamaran that could reach speeds of 54.3 mph. This year’s AC72 will be an entirely different design, based on a 75-foot, carbon-fiber monohull that lifts out of the water on two foils. It will have a crew of 11 and will have a top speed of about 63 mph.

The AC9Fs by contrast, are significantly smaller and not as difficult or dangerous to sail. But they will allow the younger sailors—who aspire to sail in future America’s Cups—to learn the behavior of a foiling monohull, while competing before large crowds during the America’s Cup challenger series and finals. Seven AC9Fs will be built for the events and shared between the teams.

The goal of the sponsors is to “reinvigorate” the youth program for future America’s Cup events, but it’s also the first time a yacht of this caliber has been developed for youth sailors.

“We believe the format and boat we have created encourages diversity and leaves an insurmountable legacy for our 150th year as well as for the future of youth sailing,” says Aaron Young, vice commodore of RNZY. “The development of future talent is paramount to the success of yachting around the world. We intend to have this event permanently embedded into future AC events.”

Wan Weidong, chairman of China Sports Industry Group, said his country, while participating in this America’s Cup, also needs to “pay more attention to fostering the next generation of top-level racers.”

“It was impressive work by everyone involved to achieve our goals so quickly,” said Bob Graham, lead designer at Yachting Developments, about the design, build and launch of the racing yacht in three months. “The Youth America’s Cup will be an unmissable chance to bring young sailors from around the world to race an exciting design demanding the best of all their skills.”

Seven identical AC9Fs will be built for the youth event and teams will share the boats for match races.

The first event of the Youth America’s Cup is scheduled to take place in November in China, with the dates yet to be determined, and the following events will take place in February, 18-23, 2021 and March 8-12, 2022.