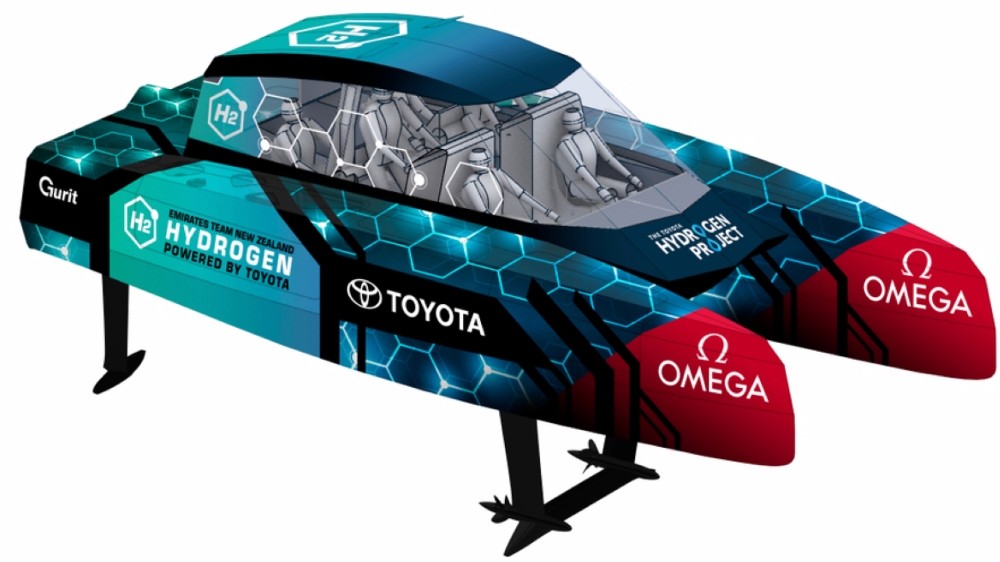 The America’s Cup recently announced its official Defender and Challenger for the 2024 event. Defender Emirates Team New Zealand (ETNZ) accepted the challenge from American Magic, representing the New York Yacht Club. Besides the breakthrough foil and sail-plan designs that are sure to define the next Cup, an even more revolutionary type of propulsion technology could become real a lot sooner: Hydrogen fuel cells.

The New Zealand team just announced the near-completion of its hydrogen-powered catamaran prototype that will serve as the tender for its AC40 raceboats. ETNZ said  in a statement that construction of the 33-foot foiling cat began in August 2021 at its facility in Auckland. The Cup Defender is now working with Toyota on installing the hydrogen fuel cell.

Sanlorenzo, Lurssen, Feadship, and Baglietto all announced intentions to develop hydrogen fuel cells for superyachts, but these will be used to power auxiliary systems rather than the main engines. Several French builders, including Fountaine-Pajot and Hynova, have announced much smaller, hydrogen-powered boats, though they won’t reach nearly the same speeds as the America’s Cup tender.

The power cat will serve as a tender to this AC40-class raceboat.  Courtesy ETNZ

Team New Zealand’s boat is expected to hit nearly 60 mph. Dan Bernasconi, ETNZ’s  head of design, said that the fuel cell presented a “completely new challenge” for the team. “These types of projects are extremely beneficial to keep the guys pushing the boundaries, continually learning and approaching problems with different perspectives,” he said.

Four hydrogen storage tanks that each carry 73 lbs. of hydrogen gas will be fitted to the boat. The tanks are specially constructed because hydrogen in its gaseous and liquid forms is highly flammable.

Since hydrogen gas is highly flammable, it will be stored in four carbon cylinders that hold about 75 lbs. each.  Courtesy ETNZ

Bernasconi said the design of the foils was largely based on its AC75 technology, the raceboat in the 2018 America’s Cup. The hydrogen boat will also have an autopilot to control the ride height that will also be used in the latest generation of AC40 boats.

The prototype is expected to launch next month for sea trials. “It will be an exciting yet stressful time once we are ready to put it to the test, which seems to be the way with every boat Emirates Team New Zealand creates,” said Michael Rasmussen, ETNZ Mechatronics Engineer, referring to the team’s track record for new technologies and raceboat designs.

Many mainstream boatbuilders are looking at hydrogen as the future of marine propulsion since its ”green” form comes from renewable sources like wind, solar and ocean water. After combustion, the only byproduct is water. “This boat is a poster child to what hydrogen is going to be and where we can go in the future,” said Rasmussen.