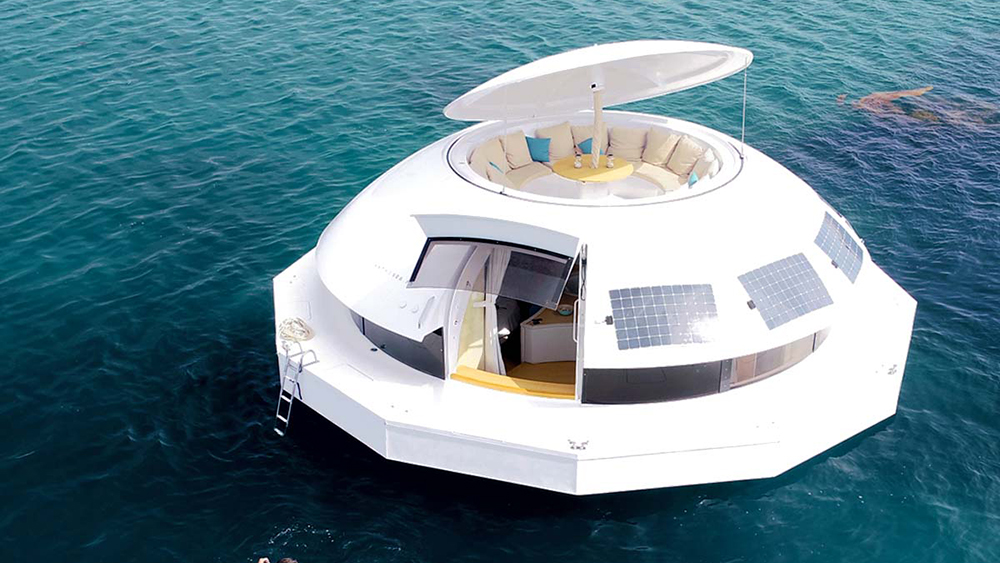 A luxe, eco-friendly floating oasis could be coming to a city near you—if Anthénea has anything to say about it, that is. After unveiling a pioneering prototype back in 2019, the French outfit has announced it will roll out its first dome-shaped apartments early next year.

It’s been a long road for the fully autonomous pod known simply as Anthénea. Penned by French naval architect Jean-Michel Duacancelle, the original design was inspired by the villain’s lair from the 1977 James Bond flick The Spy Who Loved Me. The UFO-like structure has taken more than five prototypes and over 15 years to complete, but now it’s finally ready to hit the seas.

The fine-tuned Anthénea has a diameter of 31 feet and offers space for either two adults or a family of four onboard. The upscale interior features a lounge, bar and kitchenette while the rooftop sports a bar-slash-solarium that can accommodate up to 12 guests.

A cluster of Anthénea Floating Condos could make for an incredible island resort.

Arguably, the Anthénea’s best feature is its ability to fuse seamlessly with the marine world. The company describes it as a “lotus flower” as it sits atop the seas and “has no impact on the underwater ecosystem.” The pod is fitted with solar panels and powered by 100 percent clean energy. It’s also equipped with an innovative anchoring system and sand screw which does minimal damage to the ocean floor.

Additional green tech comes in the form of a saltwater filtration system and a US Coast Guard-approved waste treatment system. The structure itself is also 100 percent recyclable, which means no waste even at the end of its lifecycle.

The upscale interior features a lounge, bar, kitchenette and more.

The Anthénea can be fitted with propulsion and driven with a joystick should guests require a seachange. The pod can also be moored just like normal vessels and can reportedly remain stable in Force 6 winds of up to 27 knots.

Anthénea says the pods can be used as exclusive oceanic condos, though the company is also looking to partner with hoteliers around the world to create floating resorts comprising multiple pods. The Anthénea could also work as a luxury Airbnb or be configured as a floating spa or restaurant.

The Anthénea can also be moored to a dock, if desired.

As for price, the basic Anthénea starts from roughly $365,000 while the high-end models, like the floating spa version, will set you back $730,000. The company says any orders placed in June and July this year will be deployed in early 2022.

In the wake of Covid-19, secluded sanctuaries have become particularly sought-after for both short- and long-term stays. Anthénea is not the only company peddling the floating condo, either. Miami-based firm Arkup recently put its first eco-friendly “livable yacht” on the market for $5.5 million, with more designs to come.

Check out more photos of the Anthénea below: