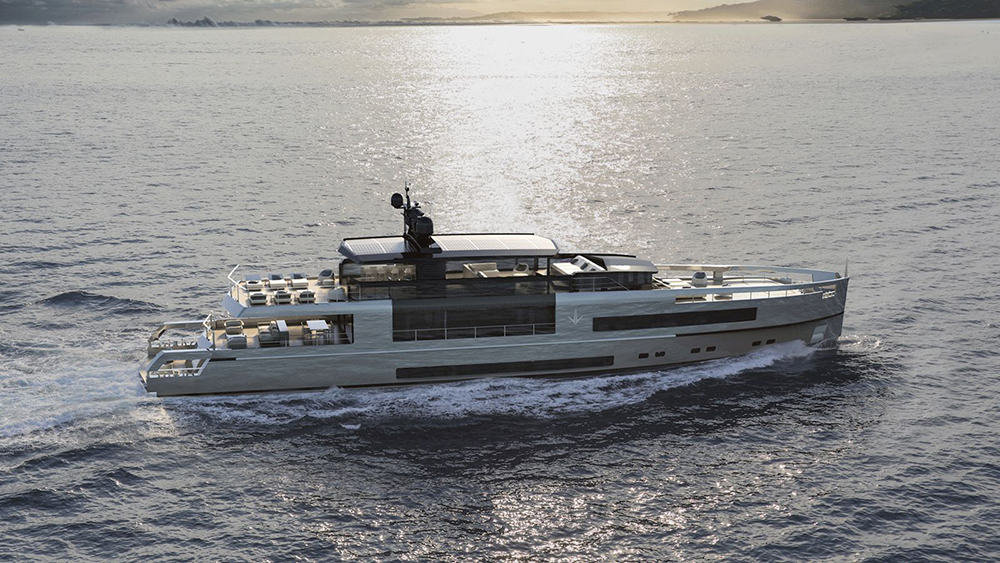 While burgeoning superyacht builder Antonini Navi only joined the industry in April, it’s come with all guns blazing. The Italian outfit has just begun construction on its inaugural 131-footer and it appears to be a true triple threat.

The superyacht goes by the name of UP40, short for “Utility Platform 40,” which hints at its utilitarian design. The versatile vessel spans 131 feet—40 meters, hence the 40—and features a modular displacement hull forged from steel. This platform can accommodate three different models depending on the superstructure the owner chooses. You can opt for an elegant motor yacht, a streamlined crossover (above), or a multipurpose explorer.

This innovative approach not only gives owners more flexibility but also promises to expedite delivery. See, construction on UP40’s hull can begin before the owner has even decided on a specific configuration. This means delivery is guaranteed in just 18 months rather than 24, according to Antonini Navi. Furthermore, seafarers can personalize their superyacht’s exterior and interior while construction is underway.

The UP40 Crossover  Antonini Navi

“My inspiration? My personal attraction to the modular world,” Aldo Manna, Antonini Navi’s partner and sales manager, told Robb Report. “For me, the word ‘modular’ is synonymous with optimization, efficiency and beauty. With modular superyachts, we can optimize the construction and give the customer the opportunity to build a truly custom yacht.”

The UP40 that is currently being built on spec was designed by Fulvio de Simoni in collaboration with the in-house engineering team. The motor yacht sports a hull designed for maximum reliability and sea keeping. The vessel has an estimated top speed of 14 knots and a cruising speed of 12 knots. She will also be able to cover around 5,000 nautical miles—that’s Los Angeles to London—when traveling at a more leisurely 10 knots.

The UP40 Explorer  Antonini Navi

Onboard, UP40 shoots for “seamless continuity” by offering a flowing layout and spaces that are “harmonious and balanced.” The interior can be customized to the nth degree, and owners can choose everything from the number and size of the cabins to the luxury furnishings inside them.

Antonini Navi and its flagship UP40 come courtesy of the storied, family-run Gruppo Antonini, which has been in business since the ‘40s. The Antonini family invested more than $12 million (€10 million) to launch the new brand last April, which may explain that aggressive attitude. But, hey, we love nothing more than a new builder with something to prove.