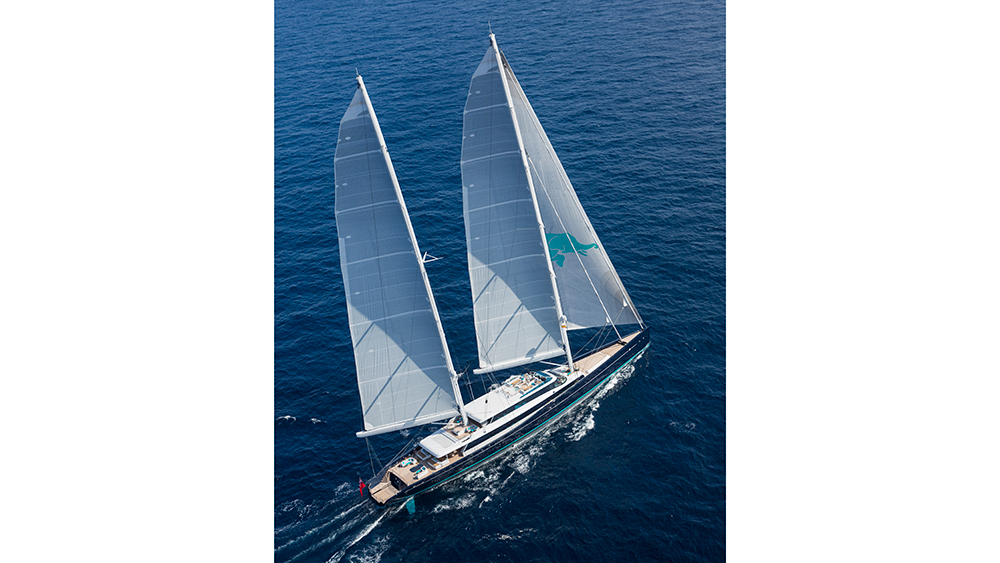 The 282-foot Aquijo might be the largest high-performance sailing ketch in the world, but that wasn’t the primary goal of its design. The owner’s intention was to build a fast world cruiser that could sail to the ends of the earth, but just as importantly, have huge amounts of interior space that would make the sailing superyacht feel like home anywhere.

Aquijo is a boat built for escapism. “The owner wanted to go and see the world on his yacht,” Gerhard Veldsman, her captain, told Robb Report.  “We’ve been around the world once already, and returned to Holland in early 2020 to complete the boat’s five-year survey. After Covid hit, everything changed.”

The plan had been to make a refit pit stop in the Netherlands before heading through the Northwest Passage to the Pacific, and then embarking on a second world circumnavigation. That voyage has been postponed until travel restrictions ease, or at least until a time when fragile countries are less vulnerable to the pandemic. “I doubt the vaccine will be available in the small island nations as quickly as everywhere else” says Veldsman. “So we’re just sitting tight.”

The owner wanted the same amount of interior space in his sailing yacht as similar-sized motoryachts.  Courtesy Edmiston

Built in 2016, Aquijo was an unusually complex sailing yacht, a collaboration between Oceanco and Vitters. Her owner is a seasoned sailor who first chartered every large, iconic sailing vessel out there, from the 289-foot Maltese Falcon and Enigma (when named Phocea) to Mirabella V, before embarking on a design and build of his own yacht.

“His aim was to take the best design pieces out of each of those yachts to construct Aquijo,” says Veldsman. “That included matching Maltese Falcon in size, but adopting a large bar on the aft deck with a beer tap.”

There’s no denying that Aquijo is a beast. She has 64,500-square-feet of sails. At full pelt, she reaches speeds in excess of 20 knots which, for a 1,600 gross-ton yacht, is an impressive sight to behold. “When you have a boat of Aquijo’s size and weight traveling fast through water, you need a team of people who understand not only the principles of sailing but also what happens below deck in terms of the hydraulics.”

Features like the indoor spa pool beneath the opening skylight are one of many features that make Aquijo a liveaboard yacht.

Aquijo has a significant amount of complex hydraulic power. Vitters’s knowledge in building large custom sailing boats was a primary reason for the owner selecting that shipyard in Zwartsluis, Holland. But at 282-feet, the boat was too big for Vitters to construct at its facilities. So, Vitters built the sailing systems, and Oceanco was chosen to build the hull and superstructure.

Exterior design was by Bill Tripp, with the contemporary interior by Dölker+Voges Design. Together with the owner, the designers conceived a sailing vessel matching a comparable-sized motoryacht for interior space. “Balancing the abilities of a lightweight, high-performance sailing yacht with all the space and luxury of a motoryacht is why Aquijo is the size that she is,” says Veldsman. “We had to go big to accomplish that.”

Aquijo pairs an efficient cruising hull with lots of weight in her lifting keel, the largest of its kind ever designed. With the keel down, the draft is an impressive 38 feet. “We once cruised up the Sicilian coast in 40 knots of wind, and all the motoryachts were turning around but we were able to sail through it,” says Veldsman.

The owner took different designs from other super sailing yachts for Aquijo and added features like the bar and al-fresco dining table.  Courtesy Edmiston

Notable design features include neon headboards, extensive deck space and a private owner’s terrace that takes you from bed to balcony in two steps. The 197-foot-high crow’s nest offers the best views on board. The beach club, with Jacuzzi below a main deck skylight, is one of the owner’s favorite spaces on board, particularly in colder climates. The boat’s 300-foot masts are too tall to travel through any canals, which means navigating the Polar regions to get to different continents. Vast, remote waters like those off the coast of Patagonia, where wind speeds can reach 70-plus knots, is where Aquijo comes into her own.

This summer, Aquijo is cruising around the Mediterranean, with charters in Turkey already confirmed through Edmiston, before heading to the Caribbean for winter.