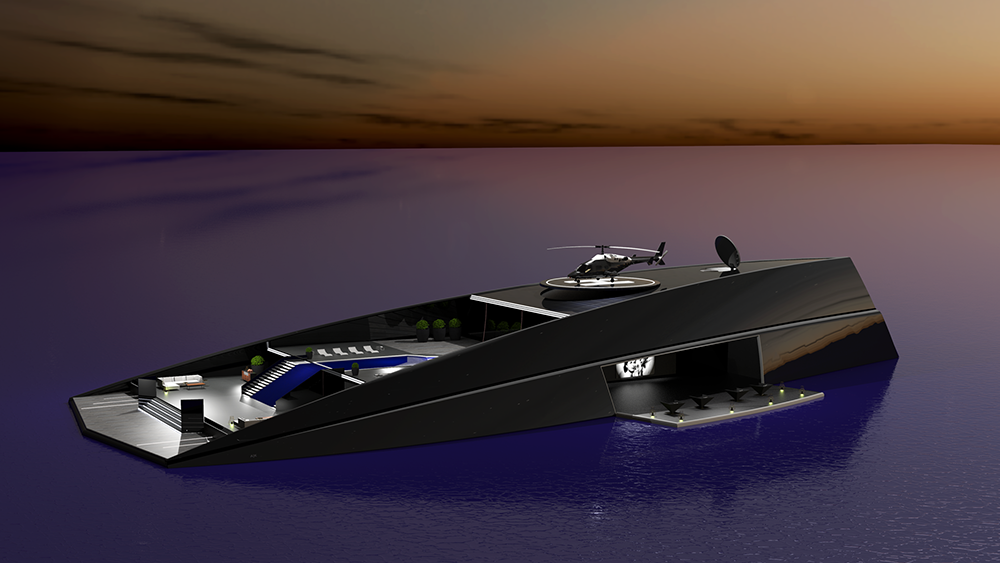 Aras Kazar’s latest concept doesn’t look much like a superyacht at all, and that’s precisely the point.

The European yacht designer, who has been penning “minimalist, futuristic and sleek” vessels for the past decade, says the new 492-footer is meant to look like “an unknown object hovering above the horizon.” How very mysterious.

Christened Ono, the yacht has a wedge-like silhouette with a sharp reverse bow and a sleek superstructure that tapers to the stern. This creates the illusion that the unknown floating object (see what we did there?) is emerging from the depths of the ocean below.

The gigayacht’s extra-long foredeck comes equipped with a helipad for your chopper.  Aras Kazar

Another distinctive feature is the supersized foredeck. It’s so long, in fact, that it has been fitted with a helipad to facilitate comings and goings. The aft deck is nothing to sneeze at, either, with an infinity pool that cascades down onto a beach club below. Another few steps down is the sizable swim platform that offers a space for waterside cocktails as well as direct access to the ocean.

Featuring a mix of aluminum, fiberglass and tempered glass, Ono has a menacing black exterior that feels very futuristic. Put it this way, she wouldn’t look out of place in Darth Vader’s fleet. Kazar has included a few technical elements at the bleeding edge, too, such as rooftop solar panels that can generate clean, green electricity and a pair of fold-out platforms amidship. Inside the two terraces, you’ll find a garage for water toys and a movie cinema that appears to be screening a Bogie and Bacall flick.

Onboard, Kazar says Ono is like “a floating villa.” It is equipped with three master suites, five staterooms and space for a full crew. Of course, there is ample space both indoors and out for entertaining.

Kazar says he has a few more projects on the horizon that will be released in the coming months. Let’s see what emerges, then.

Click here to see all of the photos of Aras Kazar’s gigayacht concept Ono.