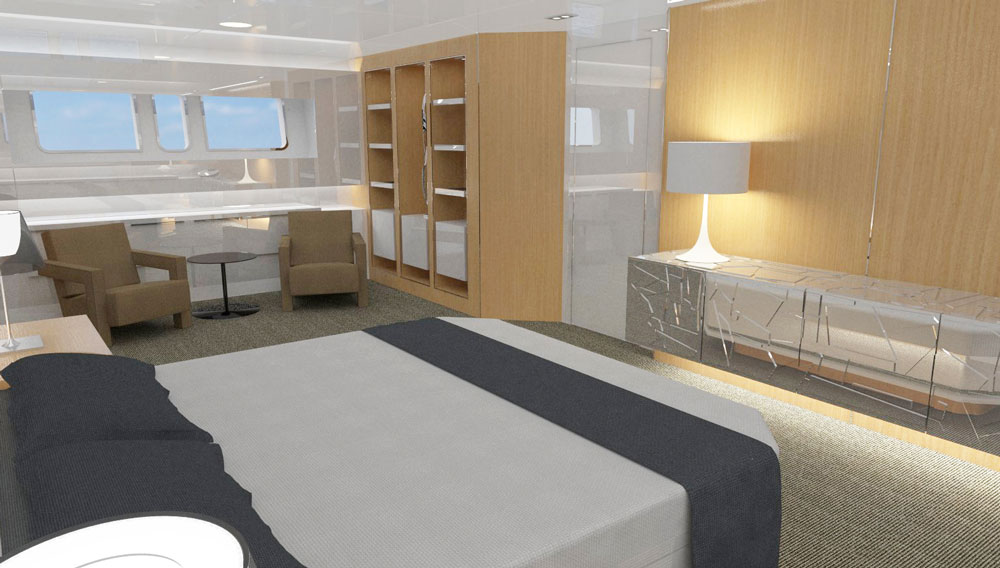 Throughout Greek history, the region of Arcadia was synonymous with natural beauty. It was often used in poetry to describe an idyllic setting or, more generally, the sense of tranquility one enjoys in the heart of nature. The Italian shipyard of the same name has striven to instill this concept into its family of yachts, including the new Arcadia 100. The company has made its designs so efficient and eco-friendly, with such closeness to the sea, that it believes its boats can enhance their owners’ relationship with nature.

Some yacht companies bill new their builds as green yachts, but Arcadia has gone much further with efficient hull design and the latest in solar power technologies. The 100’s hull was designed at the National Physical Laboratory in the United Kingdom, where extensive testing was done to determine its greatest hydrodynamic efficiency. The hull has a respectable 18-knot top speed, though even when cruising at 16 knots, fuel consumption is a meager 61 gallons per hour. At 14 knots, it consumes only 40 gallons per hour, and at 10 knots, fuel consumption drops to 13 gallons per hour—far less than in boats half the size.

The technology on the 100-footer is sophisticated, with solar cells integrated between the double-glazed window panels delivering enough power to run refrigerators, water converters, lights, electronics, and toilets, all while recharging batteries—in other words, everything except for air-conditioning (which is a major drain on any vessel). The end result is a dramatically more fuel-efficient vessel, with much lower emissions.

The 100 also sports an innovative twist on the flybridge. Instead of being just an open-air deck on sunny days, the flybridge can be fully enclosed during rain or extreme heat by side and rear panels that slide up electrically.

Owners have a choice of four- or five-stateroom layouts on the lower deck, including a full-beam owner’s suite with a separate twin-sink head that includes a bathtub. An alternate layout moves the owner’s suite to the main deck, with an opening to a private sundeck on the bow. To ensure passenger comfort, Arcadia used high-tech insulation throughout the yacht to minimize noise and vibrations.

Though the shipyard is serious about using the latest green technologies to enhance the boat’s efficiencies without compromising comfort, the ultimate goal of the Arcadia 100 is to turn the yachting experience into a true sojourn in nature. (arcadiayachts.it)