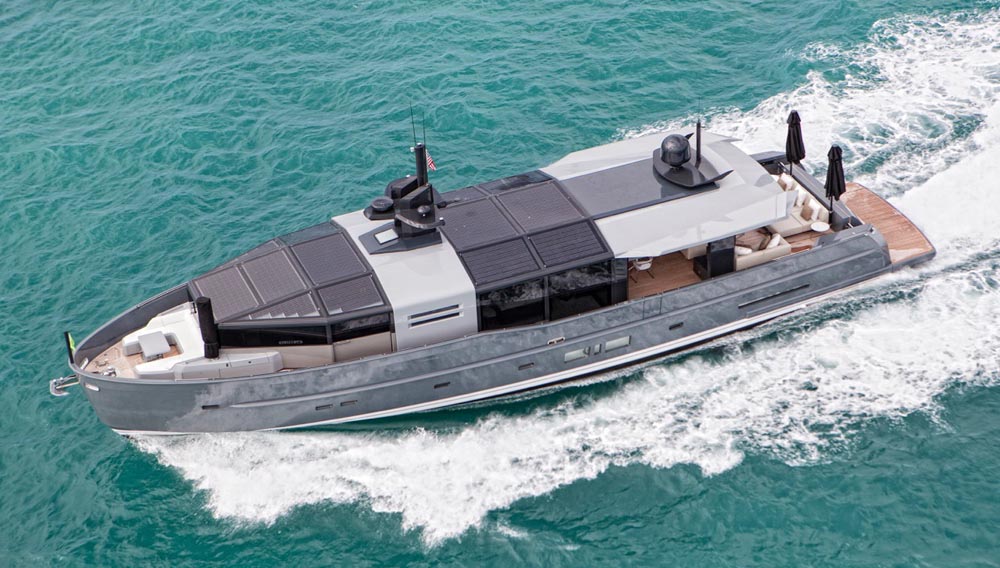 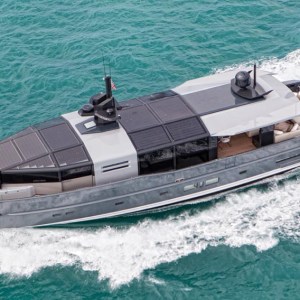 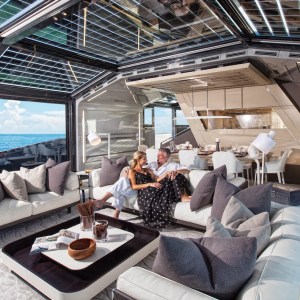 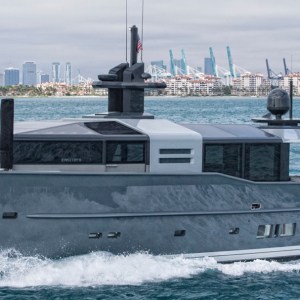 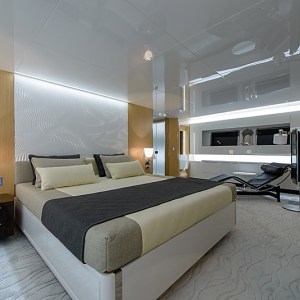 Arcadia Yachts heads into the 2015 new year’s boat show season with Arcadia 85 US Edition at her debut at Miami Yacht & Brokerage Show, from February 12 to 16.

This February, visitors at the Miami Yacht & Brokerage Show 2015 will be welcomed by an example of Arcadia’s style, well represented by the iconic A85 in its US version.

More on Arcadia 85 US version: The layout and the functional living concepts of Arcadia 85 US Edition are the result of a construction evolution: The linear design of the superstructure and the vertical line of the bow allow a better use of every single available internal and external space. Living capacity is wider than other yachts of the same size. The uniqueness of Arcadia’s project is finding in the design solution to integrating solar panels into a yacht with navigation performance. The yard’s passion for solar technology and clean mobility is finally expressed in this 26mt length and 7.15 width yacht equipped with 40sqm of photovoltaic panels, each composed of hundreds of high performance solar cells.

The design of Arcadia 85 reflects simple and understated styling with a harmonious blend of the indoor and outdoor areas. Her deckhouse has been made almost entirely out of double-layered reflecting glass, giving the interior a bright and airy feel.

Arcadia 85 is a semi-planing yacht. Its particular hull (NPL) is named after the National Physical Laboratory of England, where tests were conducted to determine the best shape hull and the best ratio length-beam in terms of hydrodynamic efficiency. Arcadia 85’s hull is built in gel coat and reinforced fiberglass with vinylester resin for the three external layers. Sides are built in PVC sandwich with fiberglass. The 25.90 metre (84.95ft) Arcadia 85 has a full load displacement of 67 tons. She is powered by twin MAN diesels R6-730hp each (optional engines 2xMAN 800hp), giving her the maximum speed of 18.5 knots, and she can comfortably cruise at the speed of 16.5 knots, as well as 12.0 knots. Her range is approximately 850NM @12.0 knots.

The yacht has four guest cabins on the lower deck, including the spectacular owner’s cabin adminship. The bow of the yacht offers space for a crew of four, which can be accessed through the wheel-house. The interior of the yacht features modern furniture by well-known best of “made in Italy” design brands, such as Poltrone Frau, Cassina and Schiffini. Almost all the interiors are composed of loose pieces of furniture, thus giving the option of modular layouts. In the US version, Arcadia 85 has an open-spaced galley to the dining area.

Arcadia 85 US edition heralds a new way to experience the sea, with innovation and ethical values. Because sailing is a privilege that should be experienced without ostentations, rushing or any kind of waste. The project has become a new point of reference for the market sector in just a few years. This is an “ecological dream,” which takes place in three different key steps: starting from the ECOTHINK philosophy to ECOTECH innovations, up to a new onboard experience, ECOLIVING.