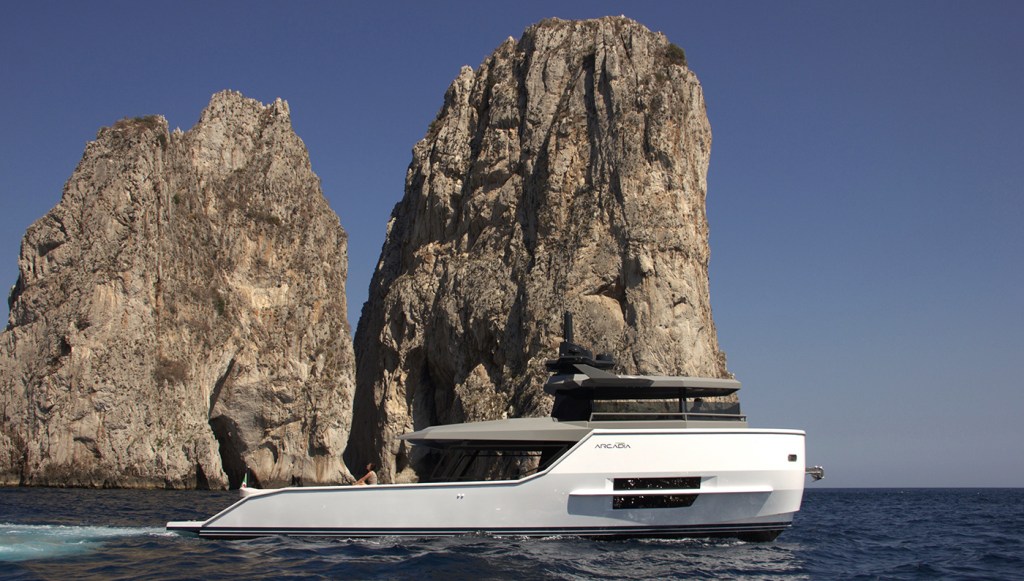 The Arcadia Sherpa can do much more than just schlep a superyacht’s gear.

Unlike the shadow vessels of old that were repurposed commercial supply ships, the 55-foot Arcadia Yachts Sherpa (arcadiayachts-sherpa.com/welcome) was conceived from the ground up and designed to be flexible. Depending on its layout and furnishings, the Sherpa can serve as a superyacht’s shadow boat for toting tenders and toys, a support vessel for an oceanfront villa, a fishing boat, a party boat with all that deck space, or a family-style cruiser with plenty of space for sunning.

Named for the Nepalese people who are often hired to guide and support mountain climbers in the Himalayas, the Sherpa is available in two superstructure configurations: an open deck, which is suited to carrying gear and other utilitarian purposes, and a saloon deck, which features a glass-enclosed living space on the main deck. The below-deck area can be configured with one, two, or three cabins, and the glass-enclosed upper deck includes the bridge, galley, and dining area.

The Sherpa is constructed with lightweight materials to enhance fuel efficiency, and the solar panels that are built into the superstructure power most of the onboard systems. The boat has a top speed of 25 knots and cruises at 20 knots, and the Volvo IPS propulsion allows you or your captain to easily maneuver up to and away from the dock.

The Evolution of the Shadow Boat

The Arcadia Yachts Sherpa is unusual in that it can be configured to serve as a leisure boat or a support vessel for a larger yacht, but the latter concept—a purpose-built shadow yacht—is not new. This type of vessel first came on the scene in the mid-2000s, when companies such as Shadow Marine converted commercial ships into tagalongs for yachts whose owners wanted to bring more toys, supplies, and crew. Once yacht builders saw a market for such vessels, they began designing and producing them with an emphasis on aesthetics and efficiency. Here we spotlight launches that illustrate the evolution of the shadow yacht.

A converted supply vessel for offshore oil platforms, Shadow Marine’s Paladin Shadow is one of the first shadow yachts. The 170-footer features a hangar for a helicopter, tenders, a car—you name it.

Oberon, a 164-foot purpose-built superyacht-support vessel, is the first launch from the Yacht Support line from Damen. Eventually, the line will include four models ranging from 141 feet to 293 feet.

Australian builder Echo Yachts launches a 151-foot support yacht that will shadow a Sam Sorgiovanni–designed 276-foot trimaran the company plans to launch in 2018.