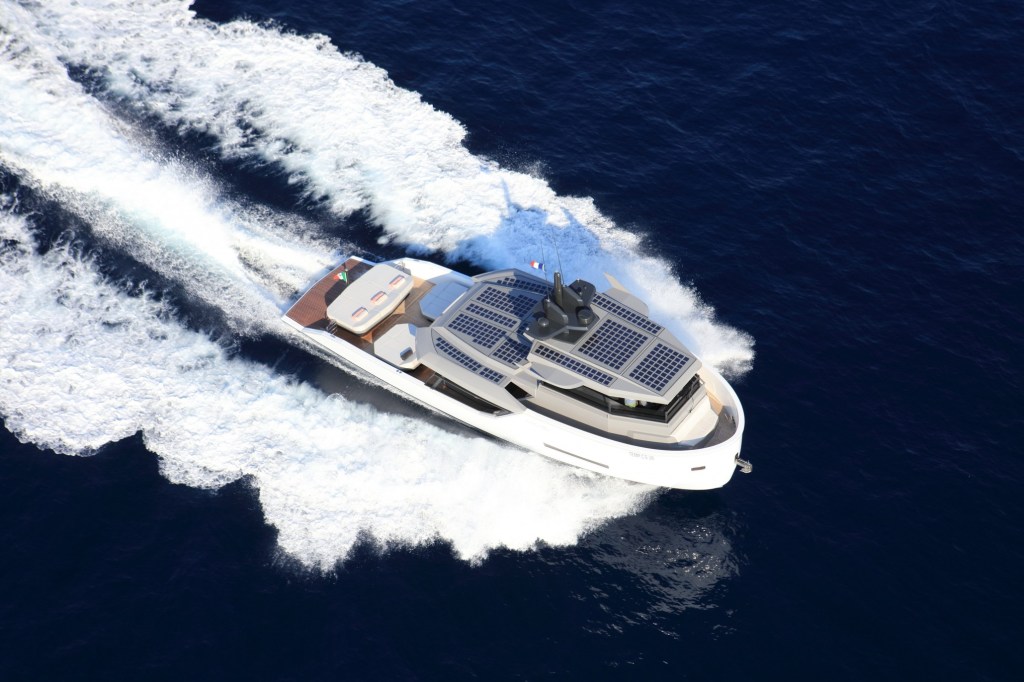 Organized by the French magazine France Yachts, the World Yachts Trophies celebrate and recognize every year the best innovations in luxury yachts from the previous season. The award ceremony took place on Saturday, September 10, 2016 in picturesque setting of the Carlton Hotel in Cannes. On this prestigious occasion, in the presence of the most important names in international yachting arena, Arcadia Sherpa was awarded the title of “Most Innovative Yacht” in the “Boats from 50 to 80 feet” category. What better way to end the 39th edition of the International Cannes Boat Show, which saw Arcadia Yachts shipyard protagonist with three new models: the world debut of Arcadia 100 and 85S, and the launch of Sherpa.

The award – organized by the historic Italian magazine Vela&Motore – was bestowed during the Genoa Boat Show 2016. The jury of experts awarded Sherpa as best motor yacht for the year 2016, providing strong reasons such as “a project outside the box that reinterprets the service and work boat theme with a vision that sets the premises for the development of a new market and category niche. It is the enhancement open space that eradicates the concept of separation between the cockpit and indoor living, which, instead, becomes a well-equipped and multi-functional continuum.”

Ugo Pellegrino – President of Arcadia Yachts remarks with satisfaction: “Once again Arcadia Yachts has been able to surprise by launching for the first time something novel. A ‘small/large yacht’ with a futuristic design still missing in the array of products offered in the yachting arena. A smart and compact boat, which, thanks to her characteristics in relation to her size, also opens up to all those fans of the big and over-powered day-cruiser. Sherpa represents an alternative solution for those ones who prefer the tranquillity of cruising at 18-20 knots. Sherpa is for those ones who consider low consumption an added value, not a lack of power performances. Sherpa is for those ones who want to enjoy and have their guests enjoy the luxury of large convivial outdoor area, or the serene conversations on comfortable sofas during cruising, protected by a large awning.”

Sherpa has an overall length of 17,70m with a width/beam of 5,60m, even more marked by the concept of “open space” of the aft cockpit to which Arcadia has accustomed us since its debut. A compact size able to confirm all of the key factors of bigger yachts available in the range of the yard (internal/external areas and volumes, high-performance efficient hull, minimalist and neat interiors). Sherpa can be perfectly compared to much larger boats (65 ft) for her LWL (16,10m) and beam (5,60m).

The efficient length/width ratio given by the specific NPL hull is another factor that contributes to the unbelievable volumes of the yacht, and, at the same time, it’s certainly a winning factor for potential customers oriented towards yachts of this size.

As usual, Guida Design has been responsible for the design and naval architecture of this innovative model, in collaboration with the technical department of Arcadia Yachts.

Sherpa is the natural evolution of Arcadia fleet towards reduced size boats. This amazing small yacht manages to keep integral in only 58 feet the vision and features that make each Arcadia yacht different from the rest of its competitors, having also given to the volumes on board a new concept of distribution, aimed at putting forth areas more used by guests, such as the stern cockpit, the living area, and cabins.