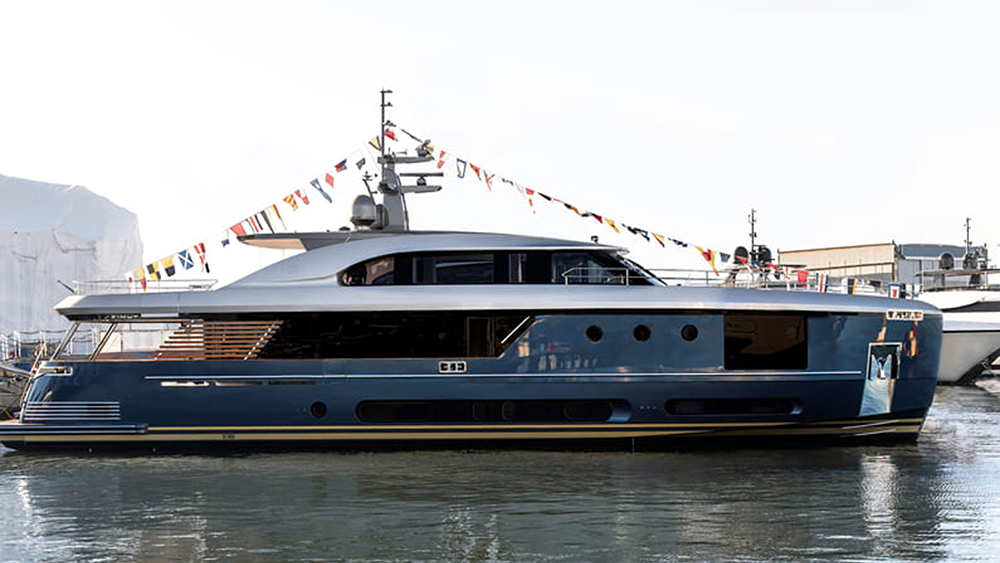 A new flagship can do wonders to reinvigorate a superyacht series.

That was certainly the aim last week when Azimut launched the new Magellano 30 Metri from its shipyard in Viareggio, Italy. First christened in 2009, the Magellano collection is designed for yachtsmen with a predilection for lengthy global voyages. As such, Azimut says the newest addition is fit for long-distance cruising whatever the weather conditions.

As its moniker suggests, the superyacht spans 30 meters from tip to tail, or roughly 98 feet. It follows in the footsteps of the Magellano 25 Metri, which was unveiled back in 2020. Like its 82-foot predecessor, the yacht features a mold-breaking interior by artist and architect Vincenzo De Cotiis along with an exterior by Dutch naval architect Ken Freivokh. It’s a far cry from the functional-looking vessels that kicked off the collection more than a decade ago.

Replete with sleek, modern lines, the 30 Metri sports vast glazed surfaces and teak louvers, which have become signatures of the series. Equipped with more than 750 square feet of glass, the superyacht was designed to be at one with its surroundings. In fact, the Italian builder claims seafarers will have a view of both the sky and the sea from every point on the yacht.

Spread across three decks, the yacht’s light-filled interiors are “intimate and inviting,” according to Azimut. She offers space for up to 10 guests across five cabins, as well as plenty of room for crew. Outside, meanwhile, there is an infinity terrace that promises uninterrupted ocean vistas, as well as a lavish lounge on the upper deck that’s perfect for alfresco entertaining and a Jacuzzi at the bow.

The vessel sports a second-generation Dual Mode hull that ensures stability even in tough seas while also reducing fuel consumption by 15 percent compared to a traditional hard-chine planing hull. As for power, two 1,550 hp MAN engines give the yacht a top speed of 20 knots and a cruising speed of 16 knots.

The yard also opted to incorporate elements designed to reduce the 98-footer’s environmental impact. The Hotel Mode package, for instance, comes with 100 kWh batteries that allow the vessel to stay at anchor sans emissions and noise for up to 4 hours during the day and 8 hours at night.

“The new flagship is the perfect fit for the brand’s crossover line, reprising features such as generous volumes and a desire to amaze in different sea conditions, without however compromising on elegance and attention to detail,” Azimut said in a statement.