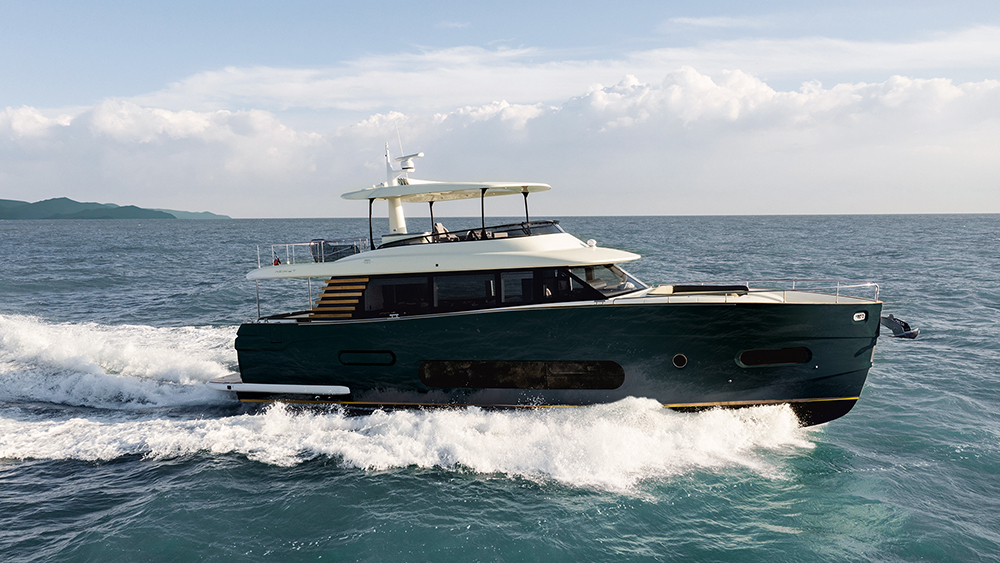 Azimut apparently believes you cannot have too much of a good thing.

The Italian yard has just added another new model to its Magellano series. Introduced in 2009, the famous line is made up of an array of yachts ranging from 42 feet to 100 feet that are geared toward long-range cruising.

The latest addition, known simply as the Magellano 66, measures 66 feet and will be capable of traveling great distances in a variety of sea conditions, according to Azimut.

Forged from GRP and lightweight carbon fiber, the vessel sports a second-generation Dual Mode hull designed in partnership with P.L.A.N.A. When the yacht is traveling between 15 knots and 22 knots, the hull can reportedly cut CO2 emissions by up to 20 percent compared to traditional hard-chine hulls while also reducing fuel consumption.

Equipped with twin 850 hp MAN engines, the 66-footer has a top speed of 23 knots and a cruising speed of 19 yachts. The crossover runs in displacement mode at 10 or 12 knots, then transitions at higher speeds to skim along the water.

On the lower deck, one light-filled owner’s cabin is flanked by a double cabin and a twin. There is also a fourth cabin that can be used as either a storage room or an extra guest cabin.

The exterior is as equally versatile. The flybridge’s aft lounge can be equipped with a cozy American bar, while the cockpit can be fitted with a dining area or a shaded relaxation spot. To top it off, the infinity terrace can be used for either sunning or sundowners.

Azimut did not say when the Magellano 66 will make its debut, but it will join quite an impressive fleet. The Magellano lineup includes the 30 Metri, 25 Metri and 14 Metri, to name but a few. No doubt there are more family members on the horizon, too.

Click here to see all the photos of the Azimut Magellano 66.