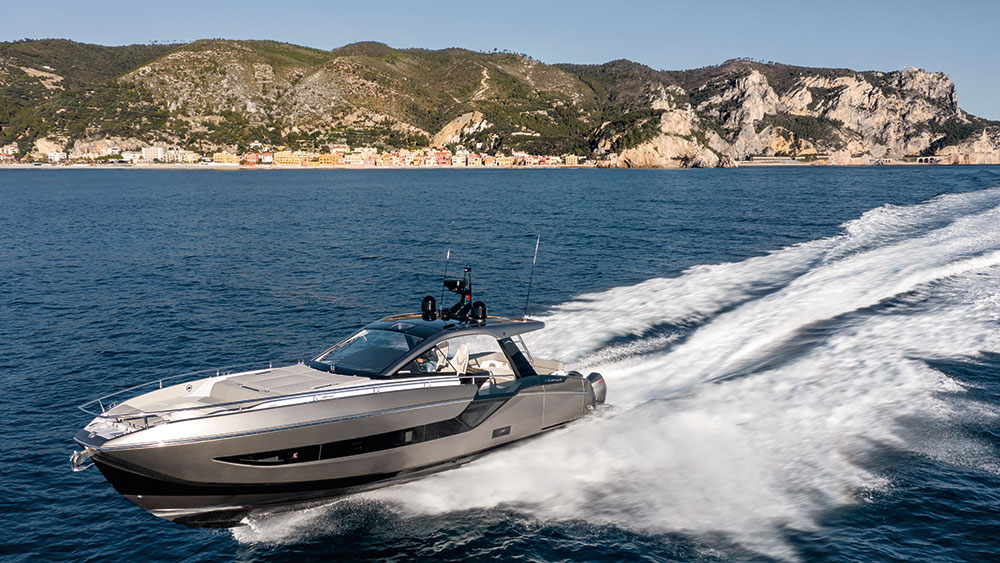 The ultimate test of a new boat is not how fast it runs or how handsome it looks at the dock, or even, within reason, the price tag. The ultimate test is how much a person wants it. During last week’s sea trial of Azimut’s Verve 47 in Miami Beach, I met a man who really, really wanted it.

Eight buyers had purchased Verve 47s in the opening days of the Miami Yacht Show, something of a record. This buyer, who had come to the Yacht Show to see another Azimut, had seen the Verve and fell head over heels. The day before the trial, he flew home to Puerto Rico to attend a board meeting, and then back to Miami for a test of the Verve.

The Verve was designed in Italy specifically for the North American market, combining Azimut’s Italian flair with four new 450 hp Mercury Racing outboards. That gives it initial curb appeal, but there’s a lot more depth to the boat than the Italian-American backstory suggests. The stepped hull was designed by Michael Peters, a naval architect based in Florida with a global reputation for creating fast boats. Francesco Struglia, an Italian designer known for his forward-looking motor yachts, created the interior and topside.

The center section lifts out of the floor to become a table.  Azimut

The real fire behind the Verve 47 was Federico Ferrante, Azimut USA’s longtime president, who saw that demand for center consoles was exploding in the US market, but knew Azimut’s motor yachts could not touch that sector.

“I wanted us to introduce a new type of offshore dayboat, but not based on a fishing-boat design,” says Ferrante. “Nobody builds a better fishing boat than the American builders. Italian yachts, on the other hand, satisfy the need for beauty, with sexy lines and elegance.”

US builders like Scout, HCB, Boston Whaler and Midnight Express have all introduced mega-center consoles over the last three years, ranging in size from 42 to 65 feet LOA. Considered offshore dayboats, they are different animals than the Verve 47, which follows on the earlier Verve 40. The new Verve, however, is two or three steps higher on the evolutionary chain.

“I knew we needed to help our Italian designers understand exactly what we wanted,” says Ferrante, concerning the Verve series. “So we specified many features specifically for the American market that you wouldn’t see on an Italian yacht.

The same applies to the go-fast running surface. Peters’ doubled-stepped hull and the new 450-hp Mercs (introduced last year) gave it a top end of 60.1 mph at 6,011 rpm during our run on Biscayne Bay, which was flat. The Verve did fine in ocean swells when we headed out into the Atlantic.

It was a hard-charging boat with instant acceleration and a firm grip in tight turns. The helm has full integrated electronics across two consoles as well as joystick control steering and a bow-thruster for tight maneuvering around docks, as well as SkyHook station-keeping, so the 47 can be held in position via GPS, without anchoring. It also has a Seakeeper 6 gyro for stability. Three helm seats are contoured to maximize comfort, one of many thoughtful designs across the boat.

The helm area features two consoles for digital control of the boat.  Azimut

We spent a few hours running the Verve 47. During my turn at the wheel, a Miami Vice-style boat surged past and wedged us into a fairly tight corridor between it and a line of commercial freighters, so we were stuck in its wake. Wake-surfing would typically mean a fairly rickety ride, but the Peters hull kept a firm track in the confused water, and we were able to charge past Don Johnson once we had the lateral space.

The real hull test was when another boating writer jammed the wheel hard over at speed to test its turning radius, without telling the folks in the cockpit. A typical hull would’ve keeled way over during the turn and most likely tossed the guests around, but the 47 pivoted tightly without leaning too high. Except for a few annoyed looks, there were no repercussions.

The asymmetrical design of the foredeck creates a large social area.  Azimut

Struglia did a fine job with the exterior, which has a long, powerful forefoot, and several touches from the superyacht world. The windows designed into the opposite hull sides of the helm area provided a beautiful view of the ocean, while providing a visual aid in docking situations. Those windows, a first on a boat this size, are more than gee-whiz features.

The second big innovation was the open rear cockpit, which has a centerpiece in the floor that raises to become a large table. Its smart design includes a sensor that halts the table’s progress if someone puts an arm or leg underneath. Just to the port side, the hullside folds down into a diving platform, widening the cockpit for easy access to the sea. The table also has a second position that turns it into a sunbed. The boat was designed for American clients, with a special console that includes a pop-up 54-inch color television, Kenyon grill and two-burner infrared stove, with a refrigerator and icemaker beneath.

The high-end dinette is the perfect place for a bite.  Azimut

The bow is also a clever design, with a full portside passage that lets Azimut push the lounge to the right, offering more of a nook than the typical single-seat bow area. Sunpads are just behind.

The interior is also a breakthrough for a center console design, with two sleeping areas, full head and large galley with lounge seating. “We designed it more like a Manhattan loft,” says Ferrante, noting the white, pickled-oak joinery, tweed fabrics on the furniture, and metallic gray counters. “We were able to put a premium on space below, which really separates us,” he adds.

Hull number one, with every bell-and-whistle option, was priced at about $1.88 million. The base boat is closer to $1.3 million, though no doubt the eight new customers will populate their boats with their own favorite options. Actually, make that nine. The gent from Puerto Rico decided to purchase the Verve 47 after his sea trial.