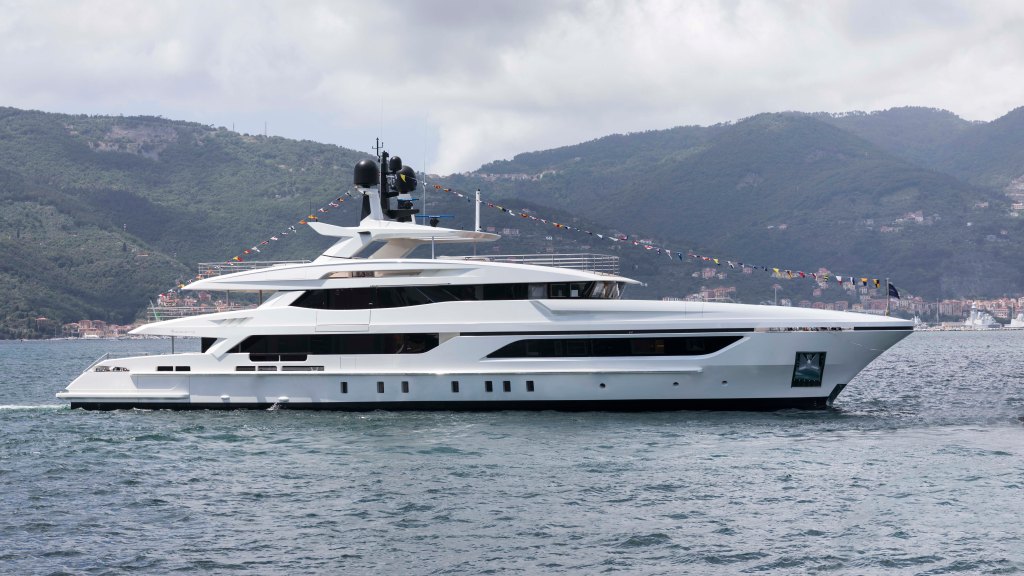 Andiamo, Italian shipyard Baglietto’s most recent superyacht launch, was built for a Mexican client who plans to cruise the Mediterranean this summer, before bringing the vessel back across the Atlantic. The 157-foot tri-deck yacht has the general profile of Baglietto’s traditional 150-foot displacement yacht, but Andiamo’s more contemporary design cues make this latest Baglietto an evolutionary step forward. A much larger beach club, the reverse-angle windshield across the helm station for better visibility, and the athwartships tender garage are all practical improvements to enhance onboard living.

The Francesco Paszkowski exterior includes a 1,500-square-foot sundeck. Beyond the significant acreage, the top deck has an infinity pool, alfresco dining with bar and grill, and a large sunbathing area. Andiamo has another outdoor dining area on a lower deck forward. There are also two open terraces on either side of the cinema room in the upper saloon. With 3800 square feet of space for gatherings, Andiamo is one of the most social boats in its class.

Margherita Casprini, who worked beside Paszkowski on the interior, used materials like lacquered ebony and onyx to create a rich, dramatic look. Both drama and functional describe the spiral staircase, made of steel and bound in leather, that connects three decks. The master suite on the main deck has a private dressing area as well as two bathrooms for the owners. Five other staterooms (three doubles and two twins with Pullman berths) are on the lower deck. Andiamo has quarters for up to nine crew.

The steel-hulled yacht with aluminum topsides was built to the highest Lloyds’ standards and is MCA compliant. Its twin MTU engines (12V 4000 M63) deliver a top speed of 16 knots and cruising speed of 12 knots. After the yacht’s shakedown tour of the Mediterranean this summer, Andiamo will make public appearances at the Cannes and Monaco yacht shows in September. Baglietto has become the comeback kid of the Italian superyacht world, with many noteworthy launches. Andiamo, the first Baglietto for a North American client, will put the historic name in front of many American boaters.