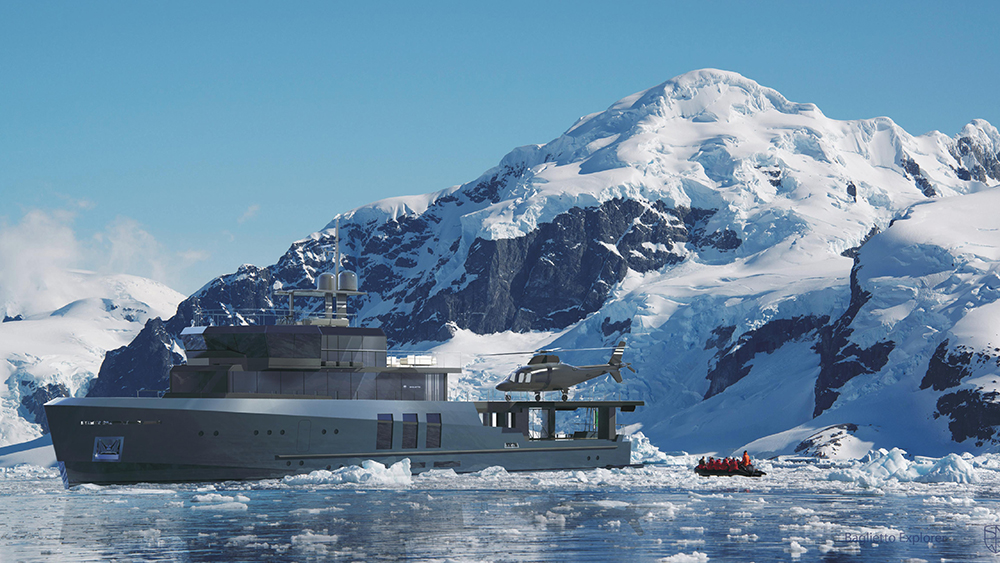 Italian yacht-builder Baglietto has announced two new models, a 213-foot V-line classic superyacht by Francesco Paszkowski and a 142-foot explorer yacht by Santa Maria Magnolfi. The two Italian studios took very different approaches in the design, with Paszkowski employing a retro style and Santa Maria Magnolfi creating a bulletproof, seaworthy yacht that can be used year-round in virtually any waters.

Design cues like a roll bar on the forward section of the V-Line, reflecting Baglietto’s classic models, are supplemented on Paszkowski’s design by lines taken from its stylized 1987 Adler. But this new Baglietto is not a throwback to the brand’s glory days. The stern portion is thoroughly modern, incorporating a float-in garage that can store a 33-foot tender. The area also doubles as a beach club, thanks to two large panels that open along the yacht’s sides. Guests can access the beach club from their staterooms through a third hatch in the central part of the yacht.

Paszkowski, who has been the de facto Baglietto designer for more than two decades, included contemporary features like floor-to-ceiling windows on the main and upper decks, a swimming pool on the top deck, and a see through-bottom in the main saloon that offers a picture window to the sea.

The yacht’s six staterooms include a master suite and VIP cabin on the main deck, with four staterooms on the lower deck. The V-Line also has a touch-and-go helipad on the foredeck. Baglietto is working on different propulsion systems, including a hybrid electric-diesel.

By contrast, the new Explorer was designed as a luxurious warship, capable of cruising in comfort into the world’s most remote waters. The designers at Santa Maria Magnolfi ticked off all the boxes to create a yacht that could cruise anywhere at any time of the year, so the most intrepid owners could see the world on their terms.

The designers realized that the interior of an intrepid vessel could also be designed around comfort and even opulence. Large windows are positioned across the topsides so that owners and guests will feel at one with the landscape, while the interior is dressed in Italian marbles, exotic hardwoods, Moroccan straw mats, and Indian silk fabrics. Large display cabinets will be included so the owners can showcase local crafts and artifacts that they have gathered on their travels. The explorer, of course, will have a spa and gym in its stern beach club.

The owners will have their own 625-square-foot apartment on the upper deck, with exceptional views in all directions. An outside dining area adjoining the apartment can be closed in with glass panels to become a winter garden, while the 1000-square-foot aft helipad, which opens and closes to protect the helicopter, converts to a large flat surface that can be used for parties or social occasions.

The sundeck serves as an excellent observation platform. The designers replaced traditional teak on the top deck with polished flooring, which is more typical of icebreakers that travel into inhospitable climates.

Santa Maria Magnolfi also made sure that the pantries, garbage storage, and fuel tanks were large enough for extended periods at sea without having to stop for refueling and provisioning. If this yacht is ever built, it could set new standards for explorers in its size range.