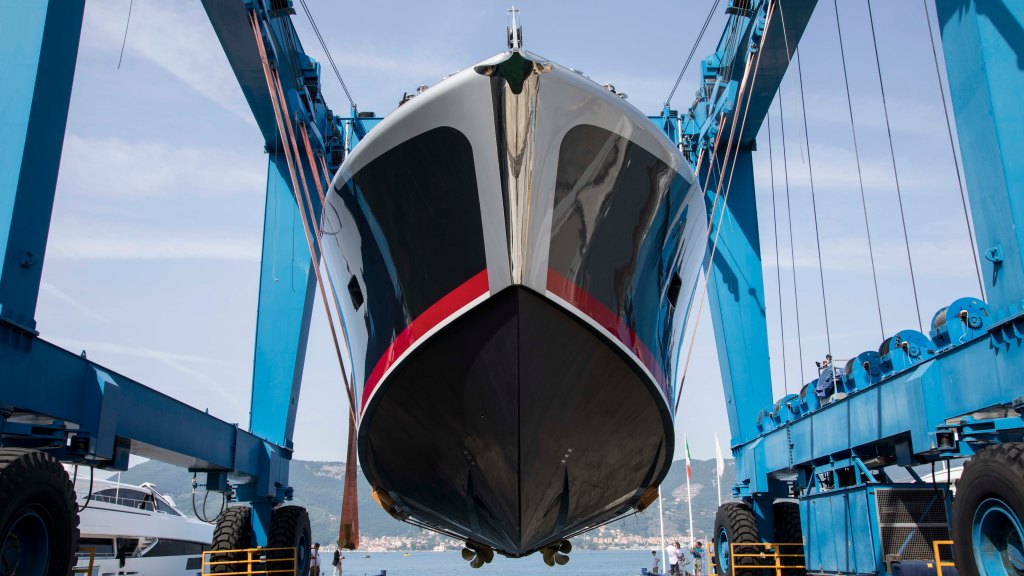 Baglietto’s first model MV19 yacht, Ridoc, splashed last week for a European client who wanted a motor yacht that looked like a naval vessel. Working closely with the Italian builder, Francesco Paszkowski Design created an exterior inspired by the MAS torpedo boats of World War II. Ridoc’s 64-foot-long charcoal-gray hull, with its straight lines and silver-gray helm enclosure, looks very much the part of a fast World War II naval boat. Even the straight transom at the stern, a rarity in these days of extended swim platforms, looks military. But that’s where the similarities end. Baglietto used the latest electronic and propulsion technologies, along with the skills of its yard’s craftsmen, to create an uncompromising luxury motor yacht.

Ridoc, with its deep-V hull, is powered by twin 1,800 hp MAN engines that deliver a top speed of about 40 knots. The helm has a 24-inch all-glass console that controls most onboard functions. Behind the helm is a dinette with wet bar for alfresco dining. Toward the stern of the boat are sunbeds, which are also found up on the bow.

The Margherita Casprini bespoke interior is about as non-military as one can find on a boat this size. Casprini combined rich, Canaletto-nut-colored upholstery with white lacquered walls and dark-stained oak floors for a retro look that works in sync with the stylized exterior. The interior’s electronics, including satellite television, are much closer to a superyacht than a naval vessel. Ridoc’s master suite is positioned forward, and two guest cabins, all with en-suite bathrooms, are at the rear of the interior. The saloon includes a spacious dinette—with generous loungers—that sits across from a well-equipped galley.

Ridoc will be cruising the Mediterranean this summer, and will make its public debut at the Cannes Yachting Festival.