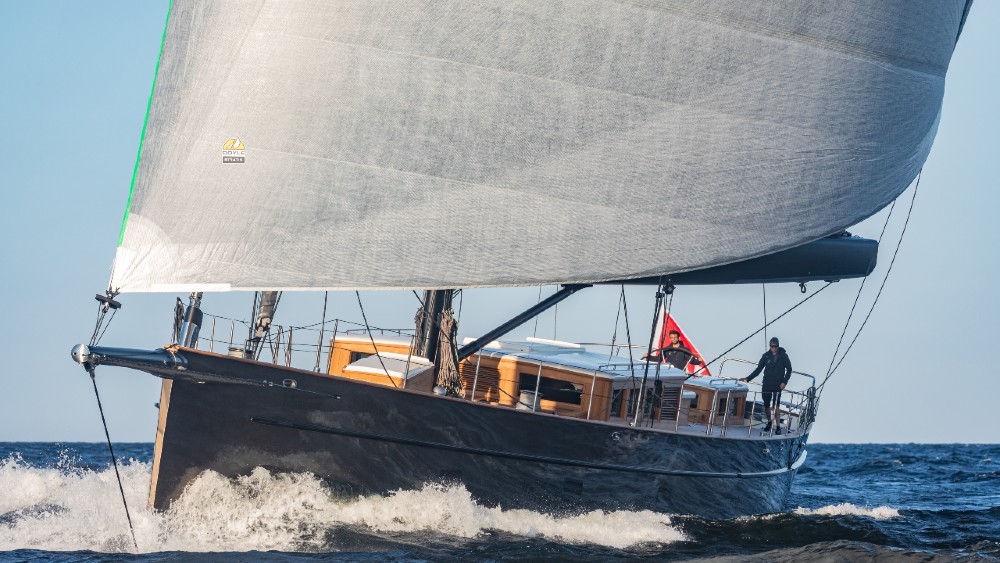 It’s easy to be fooled by the classic cutter-style features of Perseverance, with its straight stem, traditional bowsprit, and towering black mast. But Baltic’s 117-footer is more than an assortment of traditional good looks, as we discovered on a walkthrough during its global debut at the Monaco Yacht Show.

The custom sloop raises the technology stakes with a modern hybrid propulsion system that generates electricity when under way, lithium-ion batteries for silent cruising and “smart” cabins designed to minimize power consumption. The Finnish shipyard’s latest launch places the thrill of sailing in a sustainable frame.

Standing out from the crowd with a metallic-bronze hull, the neo-classic fast cruising cutter was commissioned by an experienced owner who returned to Dykstra Naval Architects following the success of his previous yacht, a Dykstra 60. This time, he wanted to undertake longer passages in comfort but without compromising on speed.

The owner chartered a collection of sailing yachts to iron out his wish list, including a larger yacht with excellent sailing characteristics, ease of maintenance and power-saving systems. With 65 feet of extra length, Perseverance delivers. Plus it has a luxurious interior by deVosdeVries Design and a double cockpit deck layout. The yacht is also equipped with a high-aspect rudder and lifting keel to enhance sailing capabilities.

“The goal for the owner was to have a classic sloop with clean deck equipment to make it easy to handle when sailing,” Tommy Johansson, project manager at Baltic Yachts, told Robb Report during a tour of the boat. “So, the yacht can set and furl its sails via push buttons for easy short-handed cruising.”

Perseverance bears many of the traditional hallmarks for which Dykstra is known, including a straight stem, distinctive deep bulwarks and truncated counter. Its deck house, skinned in teak, has individual rectangular windows that provide classic appeal. Like the timber caprail, the wood is treated with oil rather than varnish to reduce maintenance and steer away from a high-gloss finish.

The center cockpit—one of the owner’s favorite places on board—is shaded by a mini hardtop that can be lowered to protect the seating and dining area against salt spray when not in use.

Most striking of all is the yacht’s mast that pierces through the guest corridor in an artistic, structural display of prowess. “That’s a modern feature that adds something a bit different to our other yachts,” says Johansson. “We usually build around the mast so that it’s hidden.”

Perseverance sleeps eight guests in four cabins, comprising a master suite, one VIP cabin and two twins. They are all fitted with sensors that monitor the interior temperature based on guest occupancy. When not in use, the temperature automatically adjusts to save on energy.

The yacht has cruised extensively since her delivery last year, already clocking 10,000 nautical miles at an average speed of 20 knots. Building a yacht with sustainable credentials was a key prerequisite for the owner. Perseverance’s diesel-electric hybrid propulsion system can regenerate 20 to 25 kilowatts while under way at 12 to 14 knots, recharging the batteries in 4.5 hours, which then provide up to nine hours of silent running at anchor.

“It means the yacht can head out for a day’s sailing and return to the marina without using its engines,” says Johansson. “In fact, the owner has done that already, enjoying nine hours of silent cruising with only the batteries powering the hotel load.”

Perseverance is now in the Caribbean, with the owner making the most of his easy sailer by spending as much time at the wheel as possible.