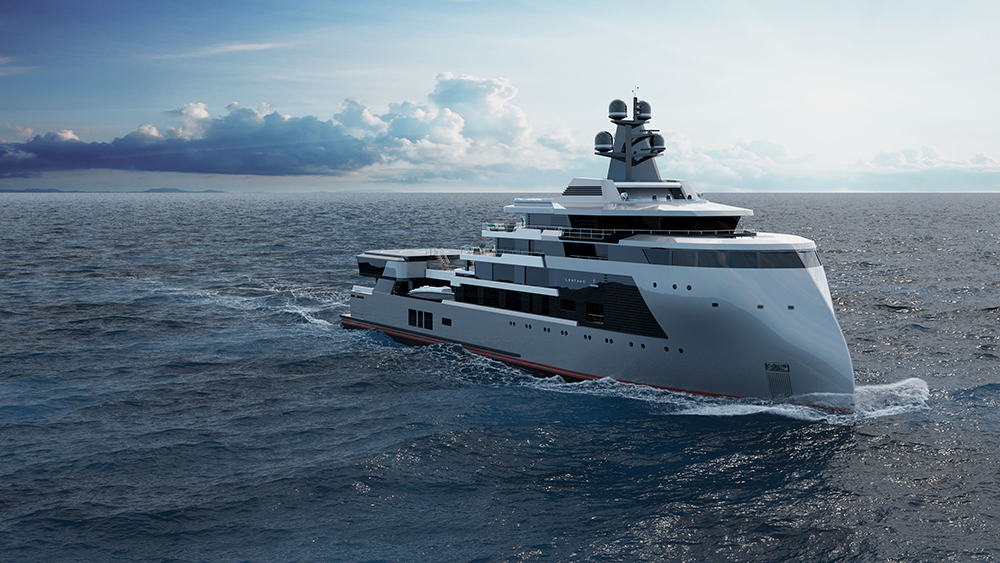 One yard’s supply vessel is another yard’s explorer yacht—that is, if Bassan & Benedetti has anything to say about it.

The budding Italian studio, which is helmed by designers Giulia Bassan and Alessandro Benedetti, has just unveiled a new 256-footer based on the hull of a supply vessel from Norweigan shipyard Ulstein. The concept has been christened Lontano, which means “far” in Italian. Fitting, since the behemoth has been outfitted for lengthy, global expeditions.

According to the studio, Lontano’s exterior was inspired by military ships and so she cuts a suitably imposing profile. The vessel sports Ulstein’s signature inverted bow, the X-Bow, along with clean, geometric lines. She’s also equipped with two Rolls-Royce AZ 100 electric Azipod engines for a top speed of 12 knots and a transoceanic range of 8,000 nautical miles.

Lontano has not one but two observatories.  Bassan & Benedetti

Despite its explorer credentials, Lontano is not short on luxury. With a beam of 52 feet, the vessel offers a generous interior that Bassan & Benedetti describes as “functional and elegant.” She can accommodate 12 guests across six sizable staterooms designed to emulate a New York City penthouse. There’s also space for up to 26 crew.

As for amenities, Lontano features not one but two observation lounges, a cinema with plush seating and panoramic views, plus a sundeck with the requisite jacuzzi. To the aft, there’s also a sprawling beach club fitted with a 30-foot swimming pool, gym, spa and massage room.

The explorer is full to the brim with toys and tenders.  Bassan & Benedetti

Naturally, you can expect toys aplenty. Lontano comes complete with an amphibious ATV, a submarine, a pair of 30-foot tenders and a few jet skis. The toys are housed in a garage that rivals that of a luxury abode and can all be deployed via the vessel’s crane. Lontano also sports a helicopter and helipad for transport and exploration.

“Lontano is a concept that explores the possibility of living aboard a yacht in complete safety, interpreting the changes that luxury travel is undergoing today,” the studio said in a statement.

At the very least, it shows what’s possible with a good supply vessel.