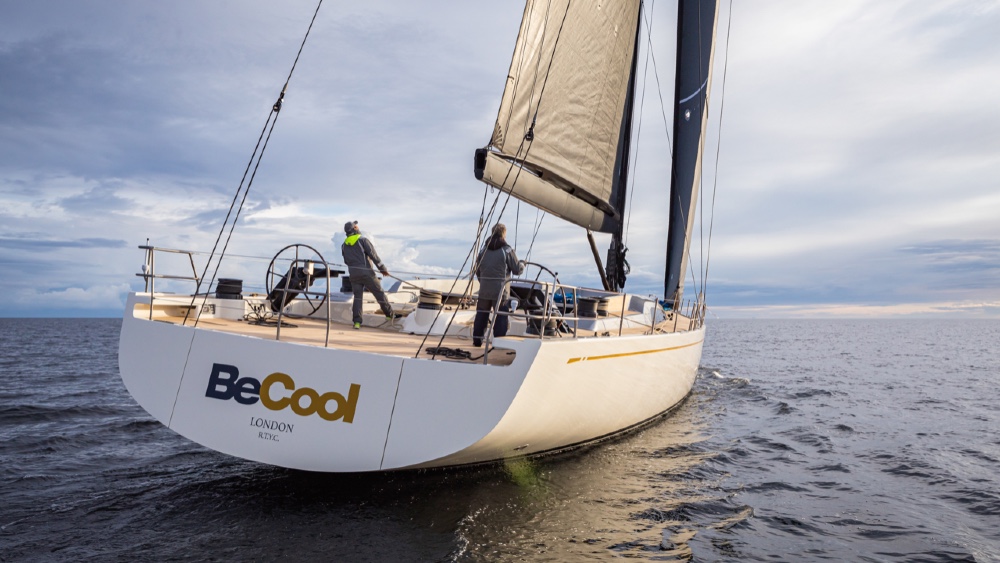 The latest Nautor’s Swan is now flying across the water. BeCool, the first in the Finnish builder’s 98 Maxi series, was introduced to the press via a virtual press conference late last week. The 98 joins a long list of Maxi hulls from 65 to 131 feet that were all created by designer Germán Frers, who has been working with the storied builder for more than three decades.

Frers spoke about the ever-changing technology of materials during the press conference, and how designers need to adapt their designs. “As these yachts grow bigger, they also get lighter with stiffer materials, so it’s important to address their comfort,” he said. “And since the boats are used for racing and cruising, it’s critical to soften the ride. We think this 98 provides a good combination of speed and comfort. She will be the first in a modern line of Maxis.”

BeCool is one of several possible configurations of the 98-ft. series that can be customized for owners. The combination cruising and racing focus on this first 98 will allow her to travel the world, while also racing in different Maxi regattas. The first 98 Swan will make its race debut at the Rolex Swan Cup at Porto Cervo from September 7-13, 2020.

The new 98 Maxi is long, sleek and fast. The first model, BeCool, will be used by its owners for cruising and racing.  Nautor's Swan

Nautor’s Swan CEO Giovanni Pomati told the group that Swan’s Maxi series, which launched in 1972, remains one of the most popular design collections in sailing history. Its first 65 finished a 17-year production run with 72 models. “There are still more than 80 Maxi yachts sailing the seas,” said Pomati.

The 98 promises to herald a new era, Swan officials said. It is built of lightweight carbon-fiber composites at Swan’s superyacht facility in Pietarsaari, Finland, and owners have the option of two different cabin layouts (owner stateroom aft or forward) and four interior designs.

The 98 also has a telescoping keel that reduces its draft, so the yacht can sail with stability in ocean swells, or with the keel raised, be able to access shallow harbors. BeCool is unusually sleek because the cabin does not jut up above the deck. Frers designed a large social cockpit into the midsection behind the mast, while the yacht’s open aft end is designed for the sailing—and racing. The open foredeck also makes a good spot for sunning while the boat is at anchor.

The interior has three ensuite guest cabins and a master suite, along with a galley and large center salon. The social area is large and open, and interior designer Misa Poggi’s three possible interiors are all minimalist, but quite unique. The design also called for large windows for natural light.

“The Maxi design is very different from 10 years ago,” said Poggi. “Now, everything is much more spacious and user-friendly. The master has a walk-in closet, and the galley that can be used by the owner and guests. The salon is very open and filled with light.”

The 98 will be designed in different configurations, says Poggi. While BeCool has crossover applications for cruising and racing, a second design will be primarily for racing. A third will be for global cruising with onboard systems that allow for more independence and longer times at sea. Poggi said that other Maxis, including both a 120-footer and 125-footer, are currently being built at its superyacht facilities. Another Maxi 88 model, which the company will show for the first time in September, is also being built.