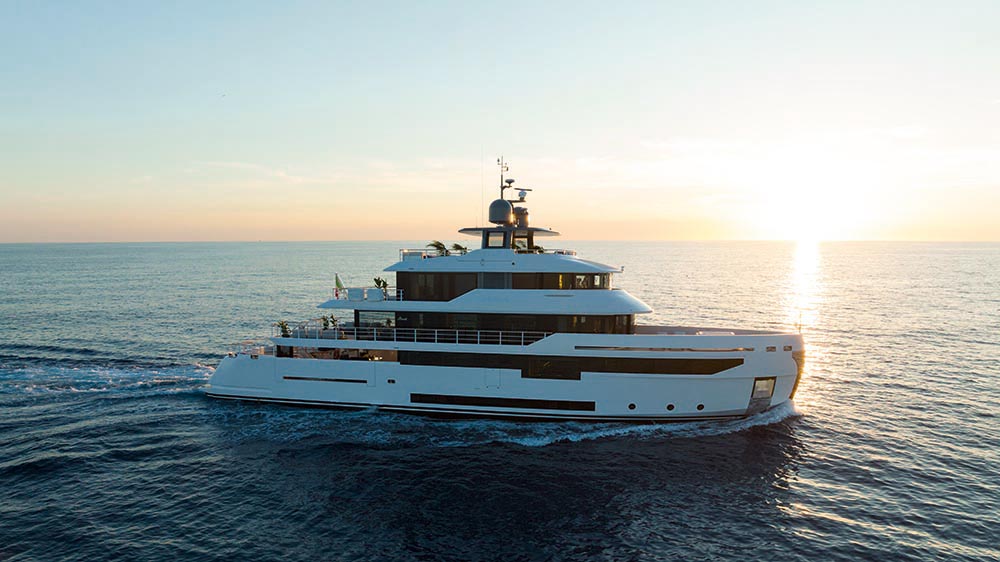 The Italian yacht maker launched a new vessel earlier this week at the Livorno shipyard on the west coast of Tuscany. The B.Yond Voyager spans a total of 121 feet. The first in Benetti’s new Voyager series, the vessel is equipped with hybrid technology that makes it among the most fuel efficient and eco-friendly superyachts in the water. In fact, Benetti claims it is the “greenest boat in its class.”

The founder and president of the Azimut Benetti Group, Paolo Vitelli, designed the newcomer in partnership with late architect Stefano Righini. The duo decided to eschew the typical fiberglass in favor of a steel hull designed for long-range cruising.

Speaking of cruising, the yacht is equipped with an intuitive E-Mode Hybrid (diesel-electric) propulsion system by Siemens Energy and SCR filters to control emissions. Seafarers can seamlessly switch between four different operating modes to optimize energy consumption. The full-electric mode, for example, allows for zero-emission navigation in protected areas.

The lithium battery pack provides up eight hours of autonomy during the day and 12 hours at night. That means it’s possible to stay at anchor in Hotel Mode using only the batteries and no generators. The batteries can also be recharged in just three hours.

Benetti claims the hybrid setup can reduce fuel consumption and CO2 by up to 24 percent and NOx by a maximum of 85 percent. On top of that, it cuts the amount of onboard noise and vibrations.

Benetti says the new model is the greenest boat in its class.  Benetti

Living up to its name, the Voyager’s range is almost double that of traditional vessels of the same size, according to Benetti. In Eco Transfer mode with only one engine running, the yacht can cover 8,200 nautical miles at 9 knots.

The customizable interior, designed Mauro Izzo, comprises a panoramic lounge known as “the playroom,” a walk-in wine cellar, four guest cabins and crew quarters. You can also opt to switch the lower deck gym for a sixth cabin and split the captain’s cabin to add a seventh cabin. The first hull, christened Goga, was styled by Giorgetti and pairs “a palette of natural colors” with blue and white accents inspired by the ocean.

Outside, the upper deck offers a completely unobstructed 360-degree view, while the sun deck is fitted with an alfresco dining area. The bridge deck, meanwhile, is set aside for the owner. Elsewhere, the spacious garage can hold a tender, a rescue boat and two jet skis.

“In my imagination, I saw a record-breaking boat, and here it is,” Vitelli said in a statement.