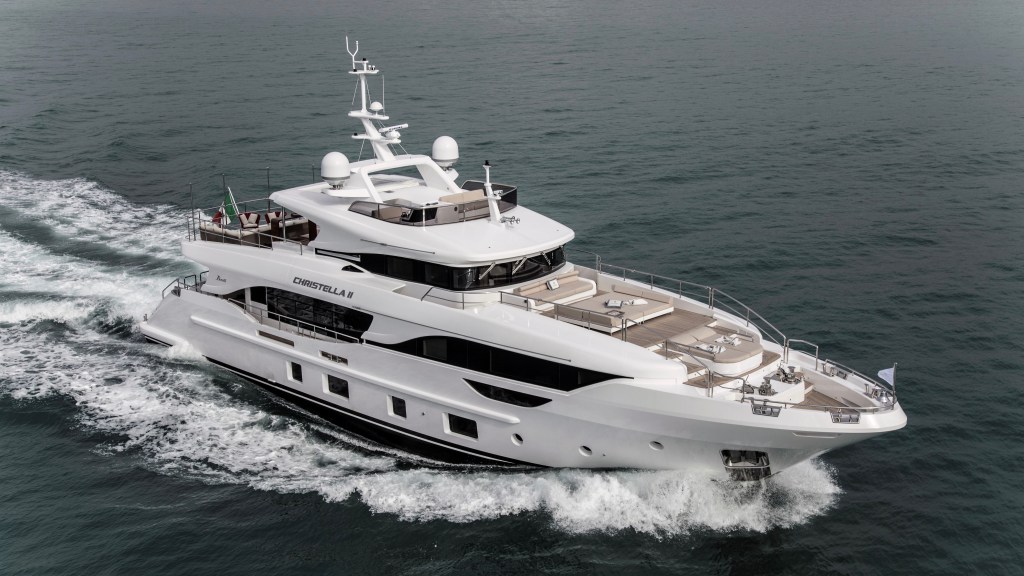 Benetti delivered its first Delfino 95 at a recent ceremony at its shipyard in Viareggio, Italy. The handing-over of Christella II to its owner from the Czech Republic was not just another Champagne-bottle-across-the-bow event, but the launch of the first model in Benetti’s Class displacement line. Designer Giorgio M. Cassetta did a masterful job maximizing the outdoor spaces and glass surfaces. The foredeck is a three-tiered structure that begins just outside the pilothouse with a lounge and chairs on a long deck, then drops to a Jacuzzi, and finally ends with the working end at the bow. At the other side of that upper deck is another open area for socializing, watching movies, or enjoying exceptional views of the water. In the cockpit of the main deck is yet another exterior area for alfresco dining. The 95’s sundeck perched on top of the whole vessel offers solitude with two comfy sofas for those seeking privacy. It is a first for a yacht this size.

The foredeck is a three-tiered structure that begins just outside the pilothouse with a lounge and chairs on a long deck, then drops to a Jacuzzi, and finally ends with the working end at the bow.  Photo: Courtesy Benetti

Cassetta dressed up Christella II’s interior with Canaletto walnut (hand-selected to minimize grain flare) interspersed with printed leather panels. The flooring in the communal areas is also parquet, while carpet was used in the five staterooms. Eramosa marble was used throughout the yacht. Cassetta worked hard to transform the functional elements into unique designs. Benetti also worked with U.K. firm Aqualuce to come up with a custom light design for the interior.

The full-beam owner’s stateroom on the main deck is nearly 23 feet wide and 10 feet long, with a separate walk-in closet and large bathroom with spacious shower encased in glass. The space is palatial for a 95-footer. The four guest staterooms are on the lower deck, two with double beds and two with twins. Christella II also has quarters for its five crewmembers.

Benetti built the boat with a carbon-fiber superstructure to keep weight to a minimum. The yacht is powered by a pair of 1,000 hp MAN V-8 diesels, giving it a top end of 14.5 knots. At 10 knots, the yacht has a range of 2,400 nautical miles. Christella II’s garage has space for a 15-foot tender, another noteworthy feature for a yacht this size. The Italian builder has always been strong when it comes to forward thinking, but this new Delfino 95 sets new standards for the sub-100-foot class.