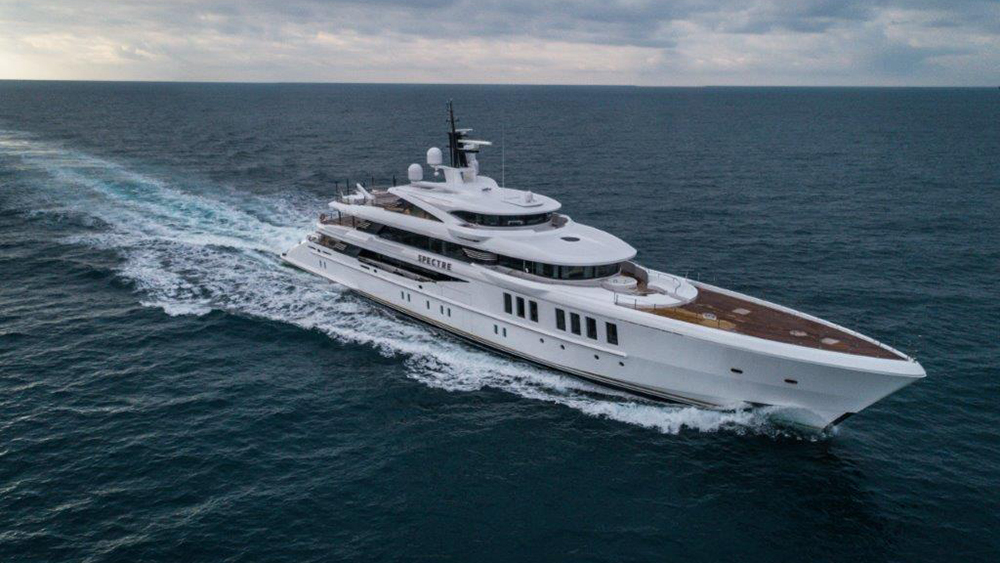 Italian yacht builder Benetti recently delivered superyacht Spectre to John and Jeanette Staluppi, repeat Benetti clients who name all their yachts after James Bond movies. The 226-foot custom yacht represents a combined 750,000 man-hours of build time at Benetti’s Livorno, Italy, facility. The yacht combines a steel displacement hull with an aluminum superstructure to save weight, along with superyacht highlights like a swimming pool and helipad on the bow. But it’s also designed with technical features that set it apart.

Spectre was the third Benetti built for the Staluppi family in less than 10 years. The exterior—by Giorgio M. Cassetta—features a long, aggressive forefoot, with design cues of classic sportscars, along with a more traditional superstructure in the aft half of the yacht. Cassetta rose to the challenge of creating a sleek-looking profile without sacrificing large interior volumes.

The naval architecture by Mulder Design includes the Dutch firm’s High-Speed Cruising Hull, which delivers a top speed of 21.2 knots, about a third faster than traditional displacement hulls, and a range of 6,500 nautical miles at a speed of 12 knots. The yard paid particular attention to reducing weight wherever possible to gain Spectre’s top-end speed without compromising on its ability to cross oceans.

The yacht’s Naiad Dynamics Total Ride Control stabilization was first developed for commercial and naval vessels, and was specially converted for use on Spectre.

Frank Mulder, who has worked with Staluppi on nine previous yachts, said Spectre included technical breakthroughs. “The groundbreaking use of Total Ride Control, which is a combination of roll reduction and pitch reduction, will greatly improve comfort when cruising at 20 knots,” said Mulder. “Her High-Speed Cruising Hull will not only be about 30 percent faster than ‘normal’ displacement yachts with similar power, but will also reduce fuel consumption at long-range speeds.”

Benetti Interior Style worked with the owners on customizing the interior, which is essentially a homage to the late-19th-century Liberty hotel and boutique styles in France. On the main deck, the saloon is inspired by a Parisian deco-style resort, with contemporary touches in Armani fabrics chosen by the owner. The stylized carpets and windows resemble traditional Liberty shops in Paris.

The lower deck features a tender garage (which can accommodate a 33-foot tender, a second 25-foot support boat, and two Jet Skis), a full-beam spa (with gym, hammam, and massage room), and two guest staterooms. There are also quarters for the 14-member crew, designed for extra space and comfort.

The main deck features a large cockpit for socializing, an interior lounge with an entrance to the yacht’s wine cellars, and formal saloon and dining areas. The centerpiece of this deck is Spectre’s lobby, which includes a spiral staircase and glass elevator. The yacht also has two guest staterooms and a large VIP cabin with two bathrooms and, even more noteworthy, two 970-square-foot wardrobe areas. The owners wanted to create this VIP stateroom as an alternative to the traditional master suite typically found in this area of the yacht.

The owner’s suite on the deck above includes a private study, sleeping quarters, his-and-her bathrooms, and private closets. The Staluppis also wanted external access to the bow that includes two side terraces. This upper deck also features a 1,200-square-foot patio, with an 18-foot-long dining table, buffet area, and a large social area. In addition, the deck has an internal sitting area for owners and guests while the yacht is cruising.

The bridge deck is designed for total relaxation. It has a custom swimming pool, large sun pads, an outdoor bar, and a central lounger with a modular configuration that can be changed. The alfresco dining area includes two exterior galleys with grill and pizza oven. Inside the bridge, the captain is surrounded by touchscreen navigation monitors, which give the yacht an authentic James Bond look.