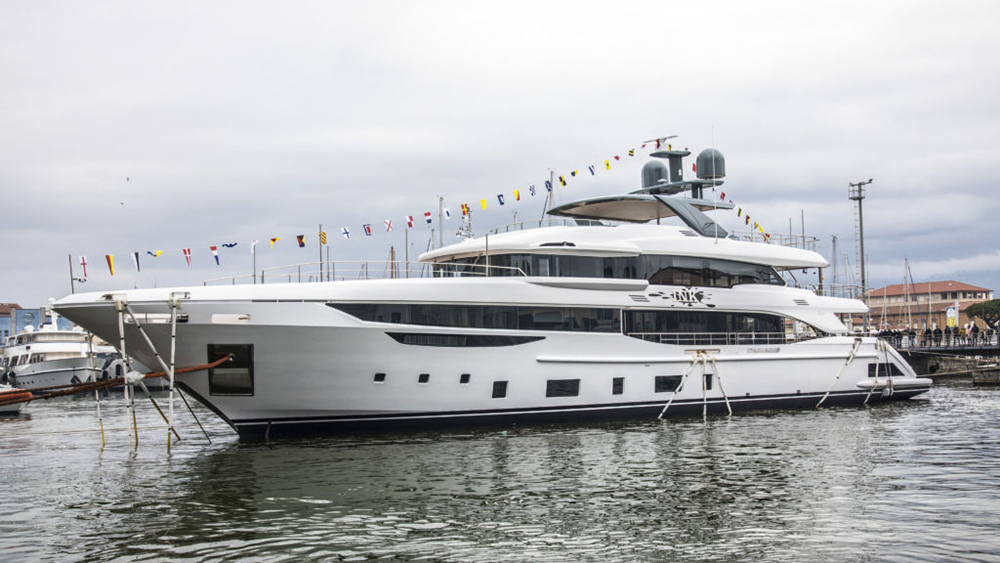 Benetti just added a new member to the family. On Saturday, the Italian shipyard launched the first Diamond 145 from the Viareggio shipyard.

The 144-foot fiberglass flagship dubbed Ink well and truly left its mark as it touched the water for the first time and set course for its lucky new owner.

The Diamond 145 first debuted at the Cannes Yachting Festival back in 2018, and two hulls have already been sold. This particular vessel was snapped up last February, thanks to the brokers Domeyachts and The Doc Yacht Services.

While speaking at the launch, the president of Azimut Benetti, Paolo Vitelli, took the opportunity to complement the designers, specifically Giorgio M Cassetta who penned the exterior. “Giorgio has given a soul to a yacht that integrates innovation and tradition,” Vitelli said.

That’s not lip service, either. Diamond 145 is the only fiberglass yacht of this size available on the market. She boasts an elegant fiberglass hull, dynamic superstructure and extensive glazed surfaces that flow along the entire length of the vessel.

“Diamond 145 springs from a project with a mission to improve life on board not only for owners and guests, but for all the crew too,” Cassetta said at the launch.

The sheer size of the yacht has made it possible to create a spacious interior that has more in common with a luxury hotel than a traditional yacht. The interiors were brought to life by Benetti’s interior style department and boasts curved lines and a “cosmopolitan” feel.

Ink has space for up to 12 guests across five generous cabins. The full-beam master cabin is situated on the main deck and comes complete with an office, wardrobe and a full-beam bathroom, while the four guest suites are situated on the lower deck, with a separate area for crew.

The gargantuan cruiser has plenty of power, too. Packed with a pair of 1,400 hp Man engines, Ink is capable of delivering a top speed of 15 knots or a cruising speed of 11 knots and has an impressive range of 3,600 nautical miles.