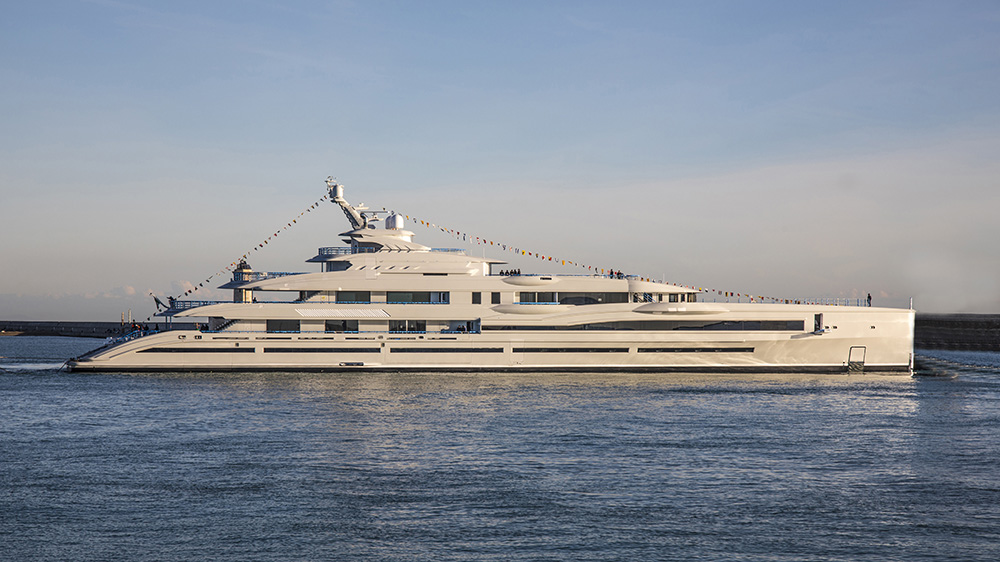 Benetti broke the record for building the largest yacht ever in Italy, after it recently launched FB277 from its Livorno shipyard. The 351-footer by Benetti’s in-house design team features a vertical bow, long, slender profile with an unpretentious superstructure given its massive size. The yacht’s beam spans 50 feet at some points.

FB277 is the third gigayacht above 330 feet being built at the yard. The world’s biggest Benetti is powered by a diesel-electric propulsion system that gives it a top-end speed of 18.5 knots. The yacht has all the frills one would expect from a vessel this size, including a large swimming pool up on the sundeck, a spa with hammam down in the beach club (not to mention a massage room and gym), as well as a touch-and-go helipad on the foredeck.

The foredeck features a helipad.  Photo: Courtesy of Benetti

Benetti’s in-house design team did both the exterior and interior, placing the master suite, which is full beam, on the upper wheelhouse deck, assuring both the owners’ privacy and exceptional water views. The apartment includes matching balconies on either side, huge his-and-her dressing rooms, with a large interconnected bathroom (think mini-spa) in the center. On the main deck, forward of the palatial saloon and formal dining area, are seven VIP cabins, all with large en suites. The decks are joined by a spiral staircase with a full-height atrium at each level. On the upper deck, a smaller, more intimate saloon includes a private cinema and grand piano for relaxing after a day on the water.

The good news for armchair sailors is that, after the delivery next summer, the yacht will be available for charter through Imperial Yachts. That’s virtually unheard of in the rarified gigayacht world, but Benetti has always been good at reinventing the rules of yachting. Imperial represented the owner and supervised the production during the build process.

“FB277 is, in reality, more beautiful and impressive than we could ever have possibly imagined,” said Benetti CEO Franco Fusignani, shortly after the launch. “Today, we’ve recognized the first essential step in strengthening our brand to offer the same outstanding, high-end vessels we’re already known for in the megayacht sector to the gigayacht world. This boat puts Benetti on the map for building yachts over 330 feet.”

Benetti has invested more than $17 million into infrastructure to build the three gigayachts. It not only created new, state-of-the-art buildings, but has also hired a special team of experts to complete these technically challenging projects. “Benetti is the only private shipyard in Italy and one of the very few anywhere in the world with the capabilities to build yachts over 265 feet long,” says Fusignani. “It’s a tremendous milestone.”