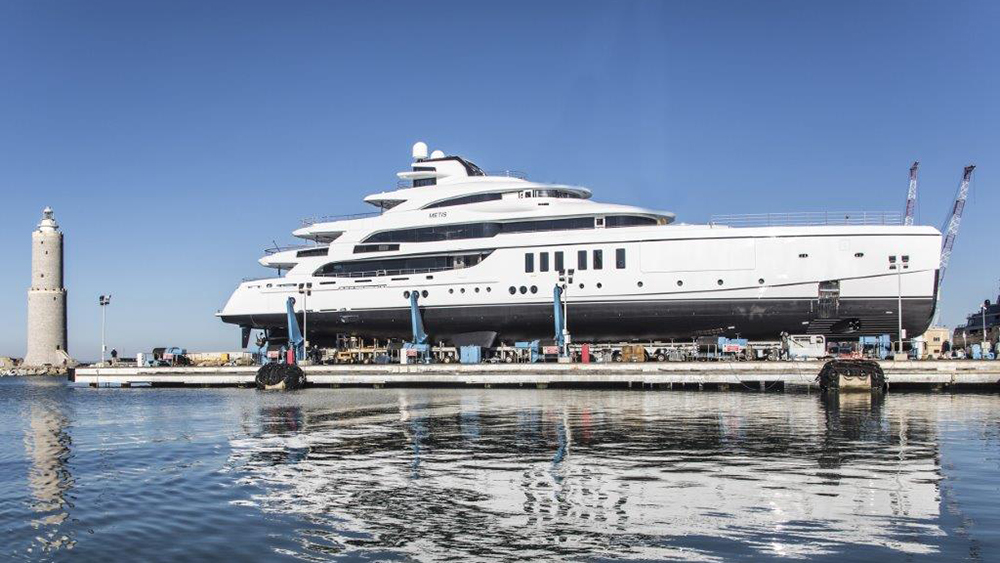 One of the owner’s favorite features on the five-deck yacht is the upper deck’s impressive owner’s apartment, which affords complete privacy and panoramic views throughout. Encompassing more than 1,700 square feet, the apartment has a master cabin, two bathrooms, walk-in closets, and a lounge area, plus a private outdoor terrace and a touch-and-go helipad.

The design team at London’s Bannenberg & Rowell created an asymmetrical layout for the interior. By rotating the upper-deck lounge area, the main-deck saloon, and the beach club 30 degrees from the “traditional” yacht layout, they were able to create a whole new angle for taking in the views. Bannenberg & Rowell worked closely with the Germany-based firm Birgit Otte Interior to complement these unique lines in a contemporary finish replete with bleached oak, leather inserts, and carbon-fiber features.

Besides the standard saloon and formal dining area on the main deck, Metis also features a children’s playroom, a twin cabin, and a nanny suite. Down on the lower deck, there are four large guest suites, crew accommodations for 12, and the aft beach club. The bridge deck features the helm station with captain’s cabin aft, and an outside lounge area with a dining table, bar, hot tub, and lounge area. All told, the yacht sleeps 12 guests and 13 crew.

Two MTU 12V 4000 M53 engines propel Metis to a top speed of 16 knots, with a range of 5,000 nautical miles when running at 12 knots. Naiad stabilizers keep things steady for all on board.

“We’ve been able to satisfy all the client wishes, even the ones received during the building process, like the customized [215-square-foot] gym on the fly deck,” says Franco Fusignani, Benetti’s CEO.

Says the owner of Metis, “The shipyard has successfully interpreted my desires and needs to perfection.”