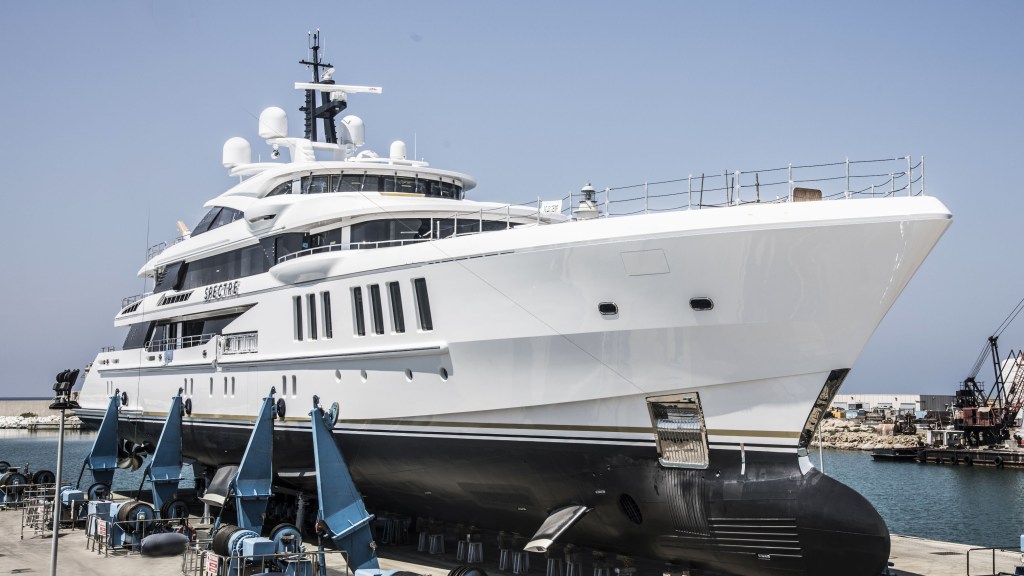 Benetti Yachts has launched Spectre from its Livorno shipyard. The 226-foot yacht is being built for Jeanette and John Staluppi, owners who have built an unique legacy by creating yachts named after James Bond movies. Spectre, named after the 2015 film, is Staluppi’s third yacht with Benetti, following Quantum of Solace and Diamonds are Forever. Mulder Design in the Netherlands created Spectre’s displacement hull, while noted Italian designer did Giorgio Cassetta was responsible for the muscular but classic-looking exterior. The interior came from the drawing boards of Benetti’s Interior Style Department.

The designers used Art Deco and Liberty motifs for the interiors with multiple references to 1920s Paris. Staluppi wanted to re-create the mood of classic French hotels and boutiques of the period, a departure from the modern interiors of his previous yachts. The main saloon’s floor, for instance, resembles Liberty-style designs in a Paris resort, employing symmetrical forms and clean-cut geometrical patterns. Modern touches are provided by select Armani fabrics. The shape of the windows resembles Paris’s Liberty-style shops of the roaring ’20s.

The custom yacht lists many impressive features across its five decks. There is a swimming pool and touch-and-go helipad, but Spectre also has two owner’s suites, including one with a private terrace, sun-lounge area, and hydromassage tub. Two VIP cabins are located on the main deck, with two guest staterooms on the lower deck. There are also quarters for 13 crew.

Cassetta’s exterior includes many straight edges, but also flowing curves along the upper superstructure. “I’m very fond of Spectre,” says Cassetta. “John and Jeanette Staluppi, with their immense experience and energy, have spurred us on to imagine a yacht complete with everything that could be desired on a boat this size.”

Mulder created a high-speed cruising hull for Spectre with a range of 6,500 miles at 12 knots. But the yacht tops out at 21.2 knots. That kind of top end in such a large, steel-hulled displacement yacht is impressive, up to 30 percent faster than a similar-size displacement vessel. The plans for the original design also incorporated the latest marine technologies, including Anew Ride Control technology by Naiad Dynamics. The system increases stability during navigation with four stabilizing fins and three blades that adjust vertically. The system not only increases stability during navigation but also improves onboard comfort while the yacht is at anchor.

Following the launch of Spectre, Benetti expects to deliver six other custom yachts through next year. The list will include three gigayachts at more than 100 meters (328 feet) that are being built at Benetti’s yard in Livorno.