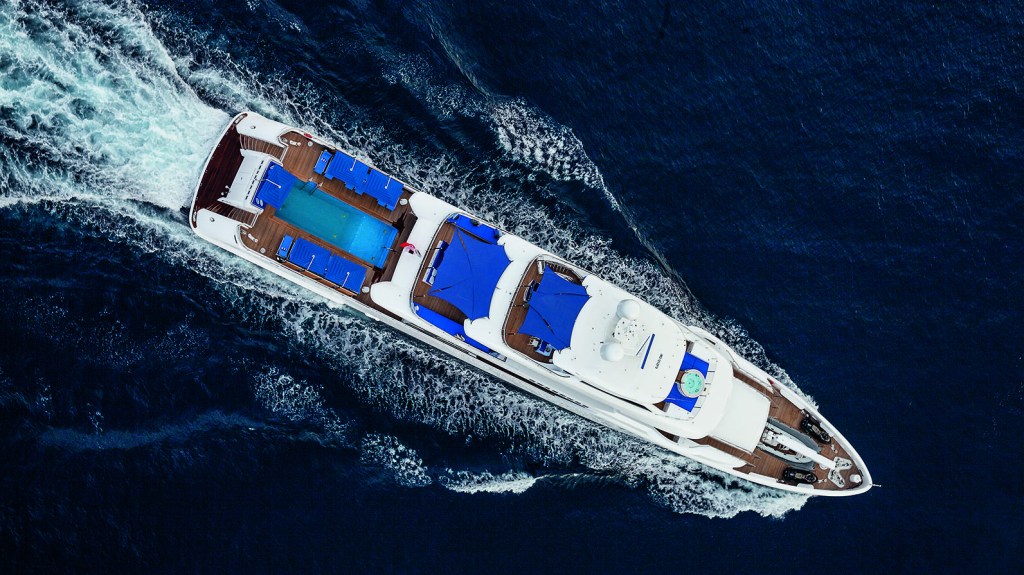 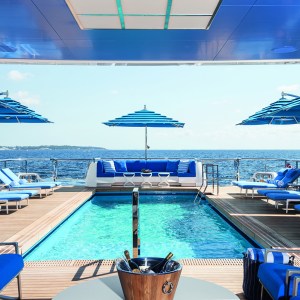 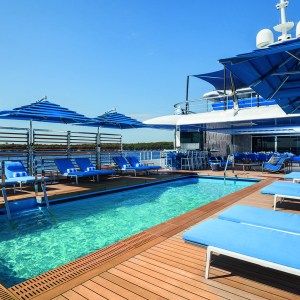 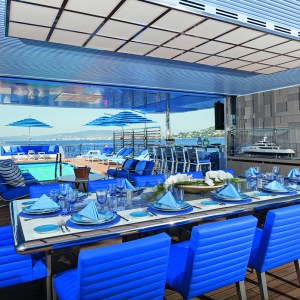 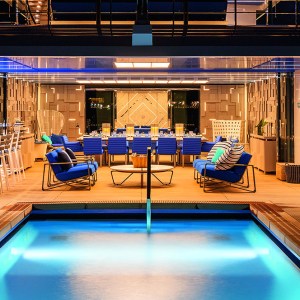 At the Monaco Yacht Show, Benetti’s 220-foot yacht Seasense was one of the must-see launches. While the Italian gigayacht had a beautiful interior by Los Angeles–based Studio Area, the real draw was the exterior aft deck, with its 33-foot-by-12-foot swimming pool and surrounding side decks. The yacht builder calls it the “Benetti Beach Club”—and for good reason. The pool’s dimensions may not seem big or impressive, but for a yacht, it’s Olympic-sized. The teak areas surrounding it also give a sense of wide-open space, more country club than rear deck. The swimming pool also converts into a basketball court so the owner can shoot hoops with his kids.

“We’ve seen a lot of beach clubs that are typically shaded and situated on the lowest deck near the water,” says Cor D. Rover, who designed Seasense’s exterior. “We wanted to bring our beach club up a level, rather than burying you in a hole, to give it that open, panoramic feeling. We wanted it to feel like it was like being on the beach.”

The freshwater pool is a technical accomplishment. Built with steel supports, it has been integrated into the hull. Benetti also routes heat from Seasense’s exhaust system through pipes under the pool to heat it. The pool sits flush with the deck, rather than two or three feet higher like many pools on yachts. It also drains into a “dump” tank just beneath, so that when Seasense is under way, thousands of gallons of water won’t slosh around and potentially upset the yacht’s center of gravity. Since that much fresh water is a valuable commodity on any yacht, it is recirculated back into the pool.

When the owner wants to use it as a basketball court, dance floor, or any platform for social gatherings, 22 carbon-fiber panels assemble into a solid grid that covers the space, with the water still in the pool.

The Benetti Beach Club, however, is more than the pool. The deck has a large overhang for shade, and just forward of that is a large space with a full-beam glass panel and 12-seat dining table. This glass room can be air conditioned or heated, but still delivers an unrestricted view of the pool and ocean. Rover says the owner’s favorite part is the “family feeling” the pool delivers. “These larger yachts tend to get so big it’s easy to lose sight of younger kids,” he says. “This just lets the family gather around the pool and have a party around the pool. That’s special in itself, but the pool’s size makes it truly unique.”