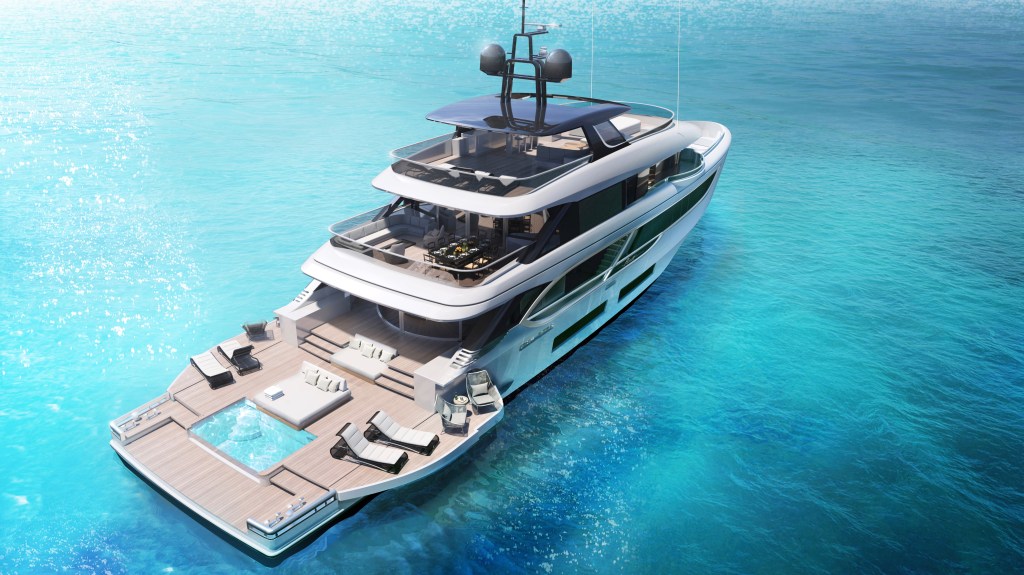 Judging from its wide-open aft deck, Benetti’s new Oasis 135 yacht concept puts a revolutionary emphasis on exterior living. London-based RWD, a firm that typically creates larger bespoke superyachts, designed a one-of-a-kind deck with a 66-square-foot pool as its heart. The concept could well be the start of a new trend in this class. Benetti hedged the design toward seaworthiness, with an origami-like layout with side bulwarks and a rear platform that fold up to keep the cockpit watertight. The 135’s sundeck and open area on the deck below, as well as a social area in the foredeck, offer an oasis on every level.

The interior design by Manhattan-based Bonetti/Kozerski Architecture also takes a fresh approach by blurring traditional spaces. The “day” area, for instance, replaces the conventional main saloon with comfortable lounges near large windows and a wet bar with seats that can double as a dining suite. But the area’s dedicated yoga and wellness spa, with its own opening balcony, is where the design really departs from the norm. A spa is typically found on larger yachts at water level in a beach club, so its relocation to the main deck shows the very different way Oasis owners will use their boats. The wide aft doorway also provides a seamless connection with the exterior deck, with similar-colored teak floors, inside and out, to reinforce this integration of spaces.

Benetti is offering two interior designs: One that looks more traditional for traditional owners, and the other with a sportier feel for a younger clientele. Bonetti/Kozerski Architecture used light-colored leather and rosewood accents in both versions to enhance the light feeling. The owner’s suite includes a large bedroom, with a private balcony, and full en-suite bathroom. On the lower deck are two VIP staterooms and two cabins with twin berths. Crew accommodations, separate and forward, house up to nine staff.

The designers also did a meld with the pilothouse, turning the rear of the helm into another lounge, with full windows on every side. Benetti expects the Oasis to cruise at 14.5 knots, with a top speed of 15 knots. At 11 knots, the yacht should have a range of about 4,000 nautical miles. Oasis’s garage can house a 21-foot ender and two jet skis.