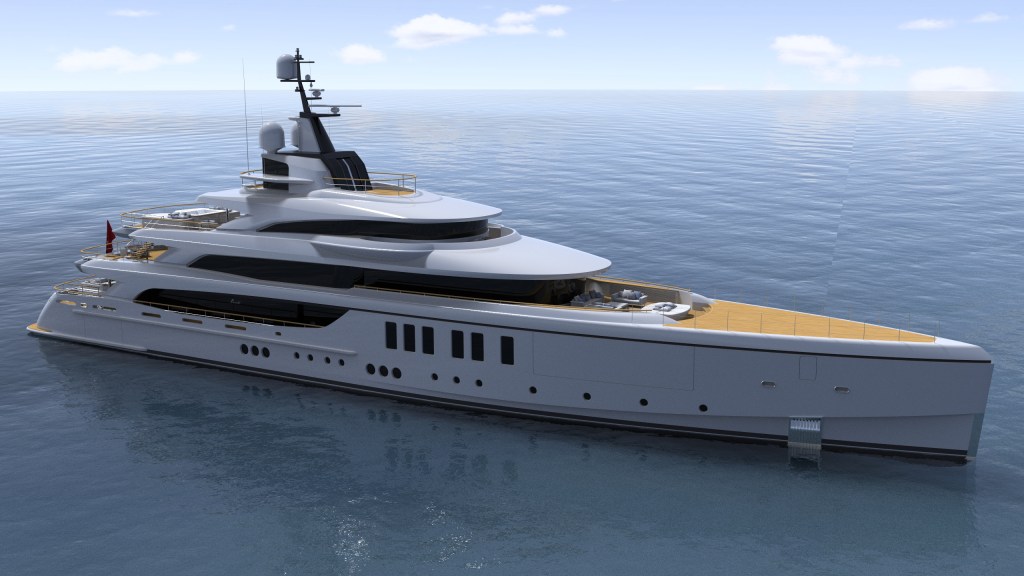 The designers’ primary focus was to maximize internal volumes, without making the boat appear squat or rounded. These larger interior spaces then gave the interior designers, Bannenberg & Rowell, room to improvise on interior spaces that are typically standard layouts. The London-based designers, for instance, created an asymmetrical layout in the stern beach club, turning it 30 degrees off center to provide a different view of the ocean. They took a similar approach with the main and upper-deck saloons in order to optimize the space.

The primary reason for larger interior volumes is enhanced onboard livability: Larger open spaces create nicer comfort zones. The master suite on the upper deck is a perfect example. More apartment than stateroom, the owners will have nearly 1,800 square feet of privacy on what is essentially their own deck. The owner’s cabin has floor-to-ceiling windows on three sides, two bathrooms, a walk-in closet, and separate saloon with a sofa and entertainment system. This area is connected to a 600-square-foot terrace forward with lounges, tables, and a generous sunbed. Just forward, only steps away, is the yacht’s touch-and-go helipad.

On the main deck is another lavish stateroom, a full-beam VIP with its own side terrace, dressing room, and double bathroom. This beautiful suite, similar to most master suites on other superyachts, is positioned just in front of the main saloon. FB276 also has four other large guest staterooms on the lower deck.

Benetti and Cassetta also designed the exterior to maximize social opportunities, giving the bridge deck a forward Jacuzzi, lounges, and a wet bar, dining table for 12, and an open sunning area. Two other cockpits, one on the main deck and another on the deck above, allow many dozens of guests onboard. The beach club, too, is designed for a sizable group. It has platforms that open on three sides, feeling larger than a traditional beach club, while offering full contact with the sea.