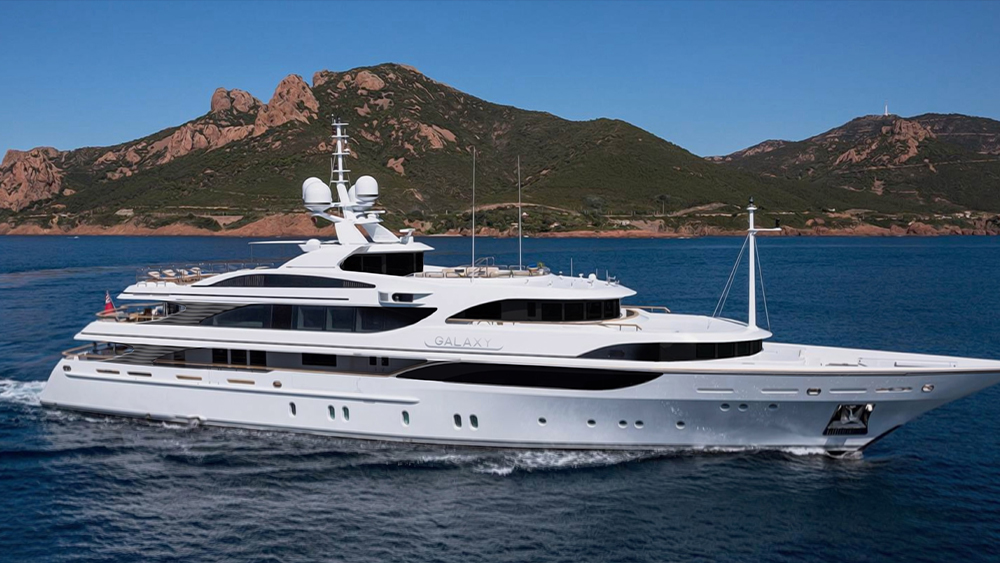 The worlds of the desert festival, Burning Man, and superyachting may not seem like a natural fit, but the owners and designers of 184-foot Galaxy successfully made those worlds collide—and, in the process, showed how yacht design can be a lot more creative, and fast.

The five-month refit of Galaxy—a 2005 Benetti—was not only unusually speedy for a superyacht, but signals the emergence of a new kind of yachting, a clean-slate design that gave the owners the fantasyland interior that they wanted. Typically, most interior refits involve only cosmetic changes, and from the exterior, Galaxy looks almost painfully cookie-cutter. But inside, the bold, bespoke look may inspire others to follow their wildest dreams, rather than staying safe with a conventional design.

Njord by Bergman Design House created the eclectic interior. The refit was done by Monaco Marine and GM Group at the La Ciotat yard in France. “Galaxy isn’t just another white superyacht on the French Riviera,” says Sarah Colbon, co-founder of the London-based design firm. “The yacht is its own out-of-world destination that touches all your senses and excites and embraces you with its energy.”

The main salon is a moody fantasyland that can double as a nightclub, art gallery and social hall.  Courtesy Njord by Bergman

Burning Man is an annual gathering that takes place in Nevada’s Black Rock Desert. It’s a mix of art, music and free expression that embraces individual creativity, no matter what that looks like. And it can look pretty wild. At the end of the festival is the ritual burning of “The Man,” a tall effigy made of wood. Galaxy‘s owners, a leading American video-games developer and his partner, are frequent attendees. They were inspired by the festival and a love of entertaining, says Colbon, to create an “alternate universe.”

The expansive main deck has been transformed into a giant “floating private member’s club,” with bespoke décor and alternatively moody and brightly colored artwork. “The Thinker” by contemporary artist Joseph Klibansky reimagines Rodin’s classic sculpture as an astronaut, and there are also paintings by Camille Hannah and wall coverings by digital artist Dylan Cole, known for Disney’s Avatar and Maleficent.

The wallpaper is Cole’s first static project. “He’s never done this before, but he appreciated the concept of Galaxy and loved the sound of the owners,” says Colbon. “So he agreed to create the owners’ own Avatar world onboard.” If you look closely, you’ll spot secret creatures and “ET” aliens hidden in the otherworldly scenes that Cole created.

The upper deck is all about calmness and serenity. Even the floors are designed to stimulate feel-good endorphins.  Courtesy Njord by Bergman

While the main deck is a nightclub that would look right at home on some alien world, the upper deck is designed for the opposite effect. It features a lounge and dining space for 12 guests which is “super calm,” according to the designer.

“What’s wonderful about Galaxy is you can switch it on and off,” says Colbon. “You can go from the ultimate club space with RGB lighting, party vibes and a DJ stand, to the serene upper deck where you can connect with your senses.”

When they’re done for the day, guests can retire to suites which have been named and styled after other planets. “We’ve designed Venus and Saturn with beautiful light pearls and golds, while Mars has these striking earthy red tones,” says Colbon. “Rather than being gimmicky, we’ve respected the colors and sensibilities of the planets.”

The digital-art ceiling and mural behind the bed by Dylan Cole (one of the artists on the Disney movie “Avatar”) re-create the owners’ star signs and their favorite constellation.  Courtesy Njord by Bergman

The master suite is even more bespoke: The bed’s headboard is designed with a metal bronze effect with tiny LED lights that create a star-gazing platform. The owners’ star signs also come through as the brighter lights, while their friends’ star signs are dimmer lights. On the ceiling is the owners’ favorite constellation.

The centerpieces of the yacht are the stairwell and elevator areas, hand-painted with an ombre, galaxy-toned effect.

Galaxy is filled with special features, including adjustable RGB lighting and smart materials like a specially engineered flooring. Colbon says that’s a world first for a superyacht. “The tight ripple effect stimulates the nerve endings on your feet when you walk on it and triggers endorphins to make you super relaxed,” she says. “It also looks like the ocean with tiny waves crashing on top of each other.”

The crew thought it was crazy to use this surface as flooring, says Colbon. “But they understand now.”

The five-month turnaround also seemed like a stretch, especially since it included a full exterior paint job, new name plates and a spa. And then there was the fantastical interior.

“This yacht shows how design can be done differently in every way,” says Colbon. “It ranges from a new type of owner to the ways that collaborations between the designers and yard can actually change the whole refit process. I think Galaxy is going to really shine.”

“The Thinker,” a modern homage to Rodin’s classic sculpture, is one of many bespoke pieces aboard Galaxy.  Courtesy Njord by Bergman

Galaxy will be delivered to its owners in mid-March.