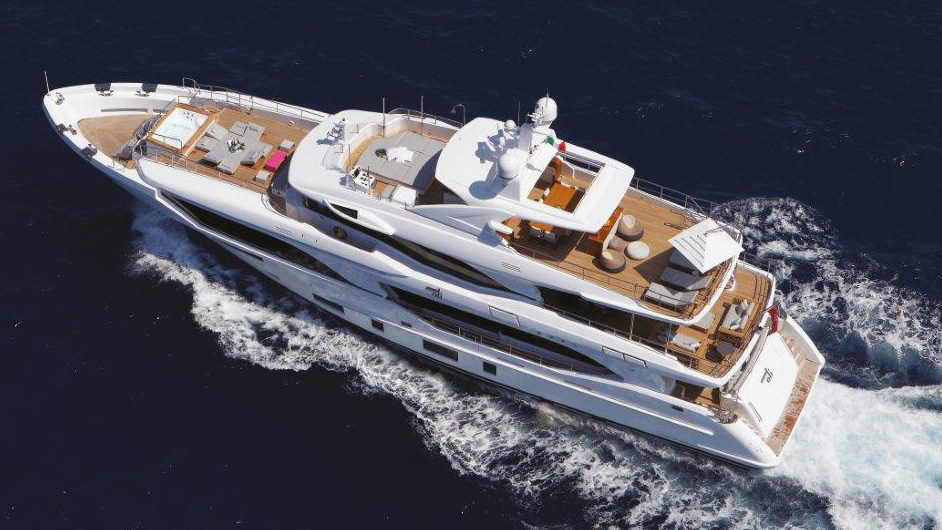 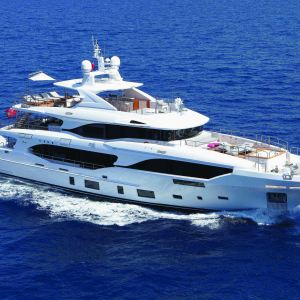 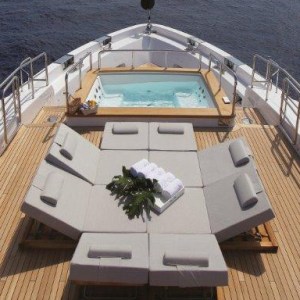 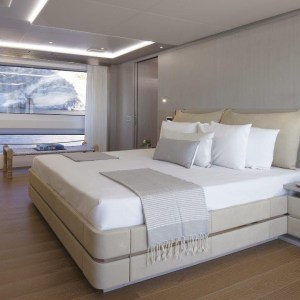 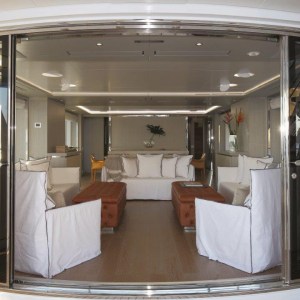 After Benetti launched its first Mediterraneo 116 last year, the Latin American owner immediately turned Oli, named after his wife, into a sanctuary for his large, young family. The Italian shipyard, designer Giorgio Maria Cassetta, and the owner had collaborated for several years on the best way to retain the elegant, classic look of the new Benetti, but also leave it friendly to children and teens. The answer, it turned out, was by making the proportions just right.

Benetti’s success at sizing the social areas, particularly the main saloon, flybridge, and foredeck, was apparent during a recent visit to Oli in Fort Lauderdale, Fla. The Benetti seems like a much larger yacht than its 116-foot length would suggest. The main saloon, for instance, has four 13-foot-long floor-to-ceiling windows that encompass most of the wall space, along with a full-beam rear glass door that bathes the open-plan area in natural light. The owner, rather than going for decorative Italian furniture, opted for muted white lounges and leather end tables in the aft living room, while going for a simple wood table with bench seats for the dining area. Cassetta used Tai mat oak walls that are not only neutral in color but resistant to UV rays. The teak floors also make a nice contrast to the gray-blue walls. Nothing screams “look at me,” and instead, the saloon has a simple, almost humble look in a well-lit space.

This simple, functional beauty continues in the upper saloon, just aft of the helm station, where the white lounge chairs invite use by kids who might want to watch a movie, rather than tiptoeing around lavish furniture. Behind, the al-fresco dining table for 12, serviced by a dumbwaiter from the galley, is the perfect setting for a large family meal.

Benetti made sure to focus on the exterior, which is where the yacht really shines. Again, the proportions make it seem like a much larger boat. The 52-foot-long flybridge offers three different zones where people gather—aft with a bank of sun loungers; a center area with dining table and a wet bar on one side and grill/sink/icemaker on the other; and a small helm station up front for the owner, who loves to drive his yacht, with a large sunbed to starboard.

Benetti also put huge emphasis on the foredeck, often a neglected area, by including a spa pool, lounge, and a multi-person sunbed that folds out like a huge four-leaf clover.

Below this foredeck, on the main deck, the owner’s suite has an office with a large seaside window, a king-size bed, and expansive en-suite bathroom with his-and-her sinks and toilets, separated by a glass-enclosed rainforest shower. Cassetta used White Statuary and Black Marquina marbles in this bathroom, as well as the four staterooms on the deck below. Fit and finish is just as pristine in these staterooms (two doubles and two twins with Pullman bunks) as the master suite.

The Pierluigi Ausonio hull retains the classic Benetti profile, with a sharp bow and layered decks above. The owner wanted this traditional look, combined with the modern interior layout, but he also relishes its 15-knot top speed and 3,000-mile range at 10 knots. Benetti has two other Mediterraneo 116s under construction that will have entirely different interiors than this family design. Of course, the ability to customize, along with exceptional build quality, is why many clients come to Benetti in the first place.  (benettiyachts.it)

This 85-Foot, Electric ‘Smartyacht’ Concept Sails Itself Using Your Smartphone