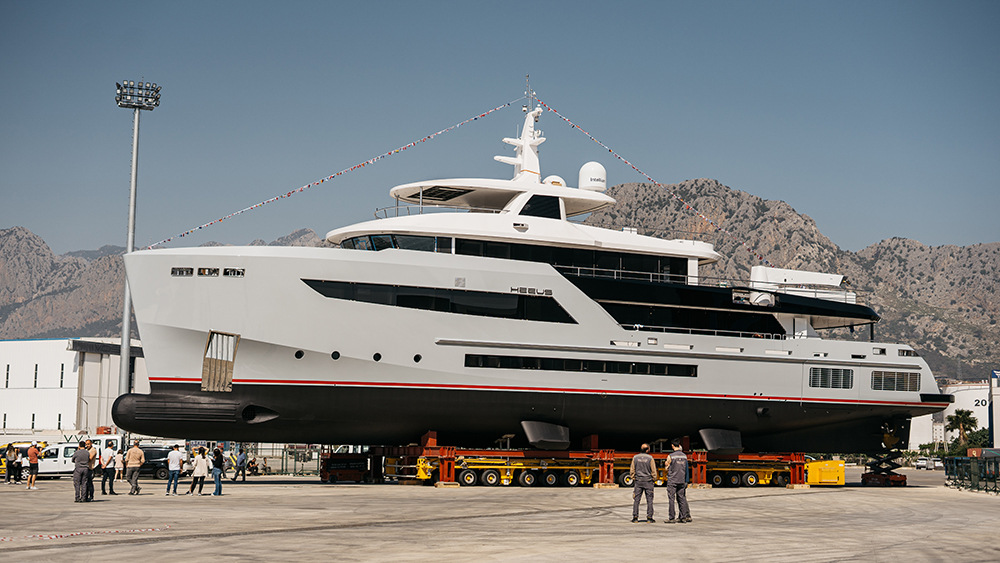 Bering Yachts has delivered a number of pocket explorer yachts in recent years, but now it’s moving on to bigger and better things.

The firm launched its largest explorer to date last week at the shipyard in Antalya, Turkey. The 145-footer, which has been christened Heeus, marks the first hull in the B145 line.

Built by an in-house team of engineers and naval architects, the semi-custom expedition vessel features a sleek, steel hull and aluminum superstructure. Designed for global adventures, Heeus features a reinforced “ice belt” midship that allows her to cut through icy waters with ease.

The explorer left the Bering shipyard in Turkey last Thursday.

The hybrid propulsion system, meanwhile, enables long-distance cruising. Essentially, the electric motors are powered by a bank of batteries that are recharged by high-efficiency, variable-speed DC generators. As for performance, the vessel’s twin Caterpillar C32 Acert motors give her a top speed of 15 knots and a cruising speed of 12 knots. She also has an enormous fuel capacity of nearly 26,000 gallons and an autonomous range in excess of 5,000 nautical miles. In short, no destination is off-limits.

With a volume of 499 GT, the spacious interior can sleep up to 12 guests across six cabins, as well as 11 crew within four cabins and a captain’s cabin. Located on the main deck toward the bow, the owner’s stateroom comes complete with giant glass windows spanning more than 100 square feet for unmatched sea views. Elsewhere, the three-decker features a huge saloon, a dining room with a 12-seat table and a plush lounge.

The vessel spans 145 feet from tip to tail.

Outside, the scenic sky lounge on the upper deck sports another large table for alfresco dining, while the flybridge comes with a Jacuzzi and bar. To the aft, meanwhile, there’s a sizable beach club that gives seafarers direct access to the ocean and a garage filled with water toys.

“We are very proud to have this first hull in the model range to be launched on the water,” Bering’s founder Alexei Mikhailov said in a statement. “This will be the beginning of a new chapter for the Bering Yachts company.”

For context, Bering’s current offering comprises seven yacht models measuring up to 85 feet and four larger superyacht models spanning up to 180 feet. In addition to the launch of Heeus, the Monaco office recently sold two more new builds (the B80 and B125) to European customers.