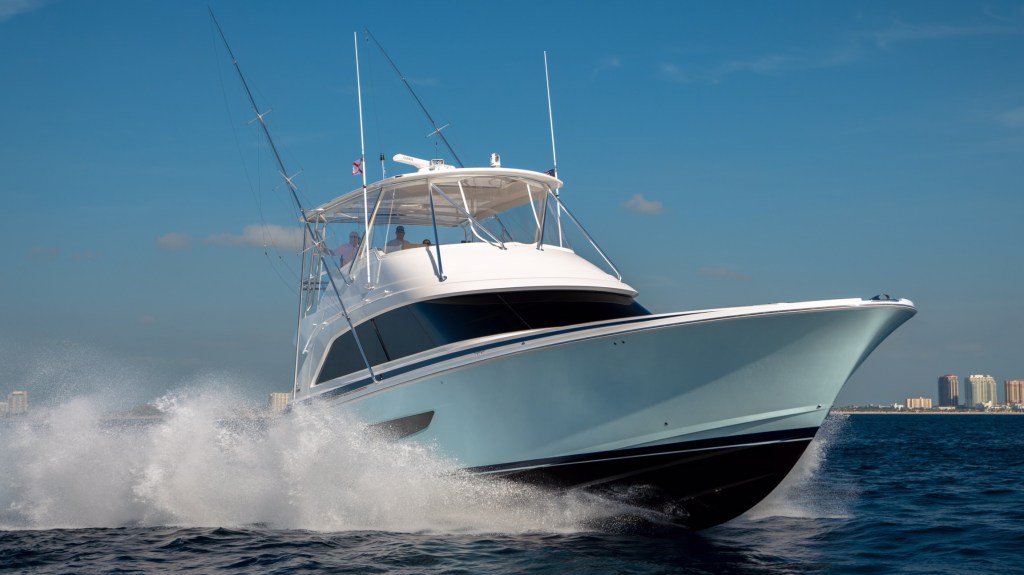 Bertram launched its new 61 sportfisherman boat over the weekend at an event for owners in Fort Lauderdale. The egg-shell-blue yacht was designed by Michael Peters, whose studio has created many iconic American yachts. Peters gave the 61 a strong, powerful exterior with a traditional Bertram look, including features like tinted, wraparound windows in the saloon and a long, open foredeck. The boat is an important launch for Bertram, a comeback boat for the company after it was acquired by Italy’s Gavio Group in 2015. Gavio, which also revived the legendary Baglietto and CCN yacht brands in Italy, decided to do away with Bertram models from its previous owner and start from scratch. The builder launched a retro-looking 35 several years ago, reminiscent of Bertram’s original 31-foot Moppie, and has since built 17 more at its Tampa, Fla., yard.

The thoroughly modern 61 is a fresh departure for Bertram and will go mano a mano with traditional competitors like Viking and Hatteras. The boat’s small center flybridge is ideal for maneuvering during encounters with billfish, while offering dual helm chairs and lounges along the sides. Below, the teak cockpit is designed for serious fishermen, with wide-open deck space, in-deck fish boxes, transom livewell with an aquarium view, 12-volt electric reel sockets, and many more angling features. Bertram also installed a Seakeeper gyro stabilizer to eliminate roll when the boat is running at top end or, more likely for sportfishing, at slower trolling speeds.

Peters designed the interior with an open-plan saloon and galley, using white decor, dark hardwood joinery, and marble surfaces across the galley. There is no lower helm station, so the area feels more like a waterside apartment than a typical sportfishing yacht, especially with the incredible view via the pane-less wraparound windows. The four staterooms belowdecks share the same beautiful joinery, white walls, and modern Italian design, including the stylized sink and shower in the master head.

The original Bertram Moppie smashed the record for the 1961 Miami-Nassau offshore race, employing the first deep-V hull shape that became the boating industry’s standard for speed and a comfortable ride. The 61 was also designed for ocean running, but with a much larger and more complicated running surface and twin 1,900 hp CAT 32 diesel engines. Bertram combined an infused, vinylester hull bottom that is solid fiberglass with a Kevlar centerline for durability and comfort in rough seas. The company said at the event it has orders for four 61s. The newest Bertram will make its official debut at the Fort Lauderdale International Boat Show on October 31. It will launch the new Bertram 50 in 2019.