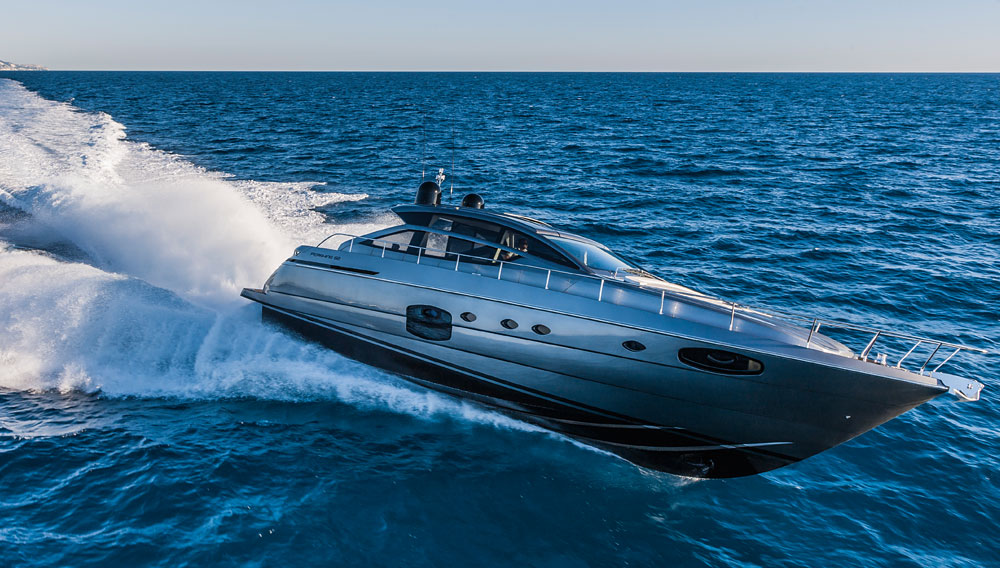 Boating and yachting enthusiasts from around the world descended on Fort Lauderdale last month for the 54th Fort Lauderdale International Boat Show, the largest in-water boat show in the world. This year’s show saw some 100,000 guests over five days, which is the highest turnout since 2006. More than 1,000 boats were on display across more than 3 million square feet of exhibit space in the water and on land. Visitors to the show enjoyed perfect weather—not a hurricane in sight—and, outside the boat show, a burgeoning restaurant and art scene, not to mention the slew of outdoor and watersports activities and historical sites to soak up. (www.sunny.org)

Here are some of the most notable vessels at the show:

• Featured in the November/December issue of Robb Report Home & Style, the 145-foot Benetti Checkmate made its debut in Fort Lauderdale. This yacht is not tough to spot along the docks among yacht after white yacht, thanks to its navy-blue hull. Onboard details include the absence of a dining room on the main deck. The main dining table is up in the sky lounge instead, where it sits aft and gives diners 270-degree views with or without the fully retracting windows open to the elements. The yacht accommodates 10 guests in five staterooms, including a main-deck master suite with 180-degree views and a private alfresco sitting area. Two 1,300 hp Caterpillar engines give Checkmate a top speed of 15 knots and a range of 3,500 nautical miles while cruising at 12 knots. (www.benettiyachts.it)

• The 138-foot Moonen Sofia, which Robb Report previously saw at Cannes, also dazzled visitors in Fort Lauderdale. It was hard to miss the three-person U-Boat Worx sub stowed on the aft beach deck. The yacht’s low-key island-style decor from Art-Line has a calm and cool feel, incorporating light fabrics and wicker as well as a recurring sea-animal motif. On the sky deck, the windows fully open for natural light and fresh air, and a skylight above the stairwell draws light into the lower decks. (www.moonen.com)

• The Vicem 107 Classic Cruiser made its U.S debut at the Fort Lauderdale show. Built of cold-molded mahogany, the semi-displacement yacht accommodates 10 guests in five staterooms, plus five crew, in modern and warm interiors created by the Turkish shipyard’s design team. The 107 carries two Caterpillar C32 engines, which propel it to a maximum speed of 22 knots. (www.vicemyachts.net)

• Built as an express-style yacht with a sportbridge—not to be confused with a flybridge—the Cheoy Lee 87 Alpha Sportbridge Express is the Chinese builder’s latest model. The 87-foot yacht features naval architecture by Mike Peters and an interior from Luiz de Basto. With an abundance of weight-saving carbon fiber and honeycombed structures and materials, this sporty yacht hits a top speed above 30 knots. Standout features include the atrium above the stairs leading below deck that draws natural light down below and the proprietary tender-launching system. The yacht accommodates eight guests in four staterooms. (www.cheoylee.com)

• The new Azimut 80 premiered to the U.S. market in Fort Lauderdale. With an exterior by Stefano Righini and interior by Salvagni Architetti, the 80 features four en suite cabins, including a full-beam master suite. Clients can choose from four different interior-design styles—Dolcevita, Firenze, Portofino, and Riviera—which range from classic to modern and all use a cream-and-white color palette with various shades of wood. The 80 features ample outdoor areas, including a large swim platform. Two 1,550 hp engines give the yacht a top speed of 29 knots. (www.azimutyachts.com)

• Officially launched in spring of 2013, the Ferretti Yachts 960 also debuted to the U.S. at the Fort Lauderdale show. The yacht features a new aft-area concept, from which Ferretti removed any tender and equipment storage, to encourage guests to enjoy the aft area. Designed by Studio Zuccon International Project, AYTD–Advanced Yacht Technology and Design, and Ferrettigroup Engineering, the 960 offers five cabins for 10 guests and five for the crew and reaches a top speed of 27 knots. (www.ferretti-world.com)

• The slender yet aggressive-looking Pershing 62, another U.S. debut, features a design from AYTD–Advanced Yacht Technology and Design, Ferrettigroup Engineering, and Fulvio de Simoni. The yacht offers three cabins and a tender-launching system (available until now only on the brand’s larger models) located in the center of the swim platform. The 62 is available with one of two engine combinations, the more powerful of which has a top speed of 46.5 knots. (www.pershing-yacht.com)

• Honorable mention goes to the new Horizon RP110 Andrea VI, which was designed by J.C. Espinosa. The yacht was scheduled to debut at Fort Lauderdale, but didn’t make it in time. It is now set to make an appearance at the Palm Beach International Boat Show in March. (www.horizonyacht.com)

• Triton Submarines displayed its Triton 1000/2 sub at the show, along with a scale model of its 3300/3. Triton also promoted its recently launched bespoke adventures, which offer its subs for charter through EYOS Expeditions. (www.tritonsubs.com, www.eyos-expeditions.com)

Notable boats for sale at the show included:

• The 281-foot Derecktor Cakewalk through Merle Wood and Associates (www.merlewood.com)

• The 164-foot Feadship Iroquois through Moran Yacht and Ship (www.moranyachts.com)

• The 162-foot Christensen Remember When (www.christensenyachts.com)