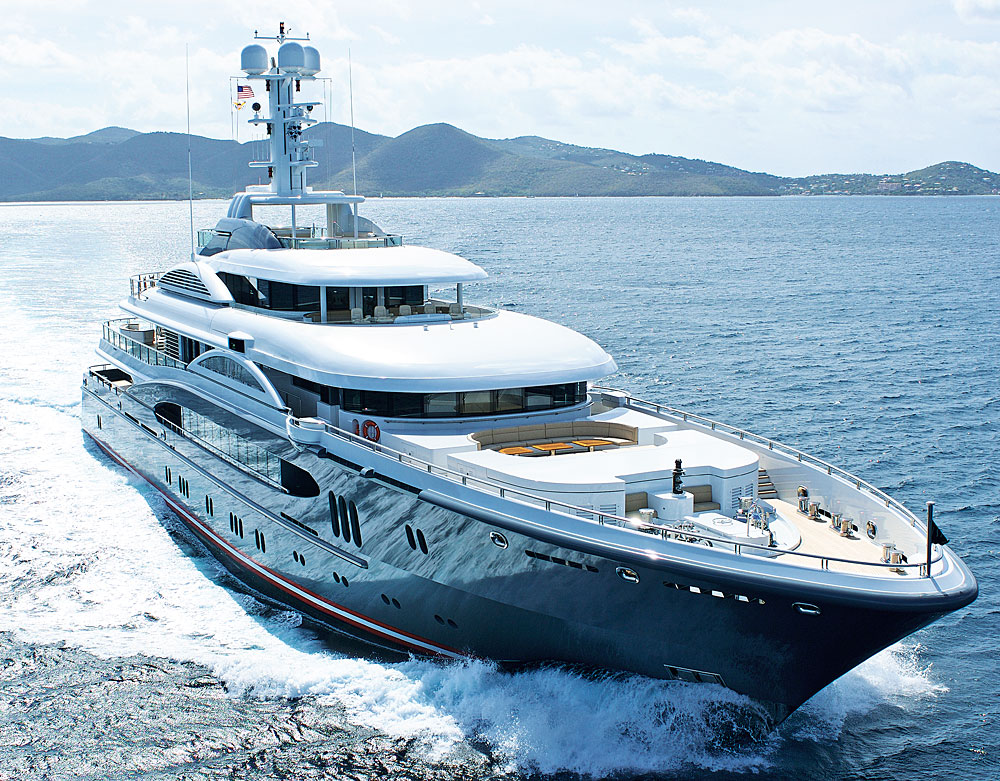 The proprietors of the 125-foot Hakvoort Perle Bleue (+31.299.651403, www.hakvoort.com) previously owned the 148-foot Hakvoort Campbell Bay. Although the owners downsized, they did not have to sacrifice the bigger-boat features to which they had become accustomed.

Designer Donald Starkey worked with the yacht’s owners to create Perle Bleue’s interior, which is much more intriguing than those of most similar-size yachts. The main salon, for example, features large murals showing partygoers in tuxedos and gowns, all images taken from a painting by Brazilian artist Juarez Machado. The master suite, on the main deck, is done in warm golds and bamboo, while light-colored woods lend an airy ambience to the guest cabins, located belowdecks. Many of the rooms seem larger than they are because of Starkey’s extensive use of mirrors.

Hakvoort has not released the price of Perle Bleue, but the yacht, part of the charter fleet of Fraser Yachts Worldwide (www.fraseryachts.com), is cruising the Mediterranean this summer at a base rate of about $245,000 per week, one of the highest charter rates in her size range.

The 146-foot Christensen Party Girl (360.695.3238, www.christensenyachts.com) is designed to live up to her name. Her owner, who has owned a dozen or so other yachts, plans to entertain as many as 150 people at a time on the yacht.

In the skylounge, which extends the full width of the 30-foot beam, most of the furniture faces two sliding glass doors that connect to the outdoor deck. Extra air-conditioning keeps the skylounge cool when the sliding glass doors are open, further encouraging party guests to mingle in both areas. On the sundeck, seats face forward, aft, and to the sides, creating conversation nooks in areas from the hot tub to the swim-up bar.

Christensen says that it has received so many orders for its 157 semicustom series that Party Girl will be the last custom design to leave the yard until at least 2011. The $30 million–plus yacht, which can accommodate as many as 12 overnight guests, charters at a base rate of $185,000 per week through International Yacht Collection (www.yachtcollection.com). She was booked to host her first charter party just two days after her arrival in the Caribbean last December.

Among the distinguishing features of the 269-foot Oceanco Alfa Nero (+377.93.10.02.81, www.oceancoyacht.com) is the infinity pool on its aft deck. The pool, which measures 23 feet long and more than 11.5 feet wide, converts to a helipad and a dance floor.

The yacht’s interior, styled by the Nuvolari-Lenard design house and Alberto Pinto, evokes the sea with furniture details that resemble pieces of staghorn coral. The opulent master suite includes an office, a dressing area, a bathroom with a steam shower and hot tub, and a private outdoor patio with a second hot tub. The yacht houses as many as 12 guests in six cabins, including the master, and the crew quarters can accommodate as many as 28 people.