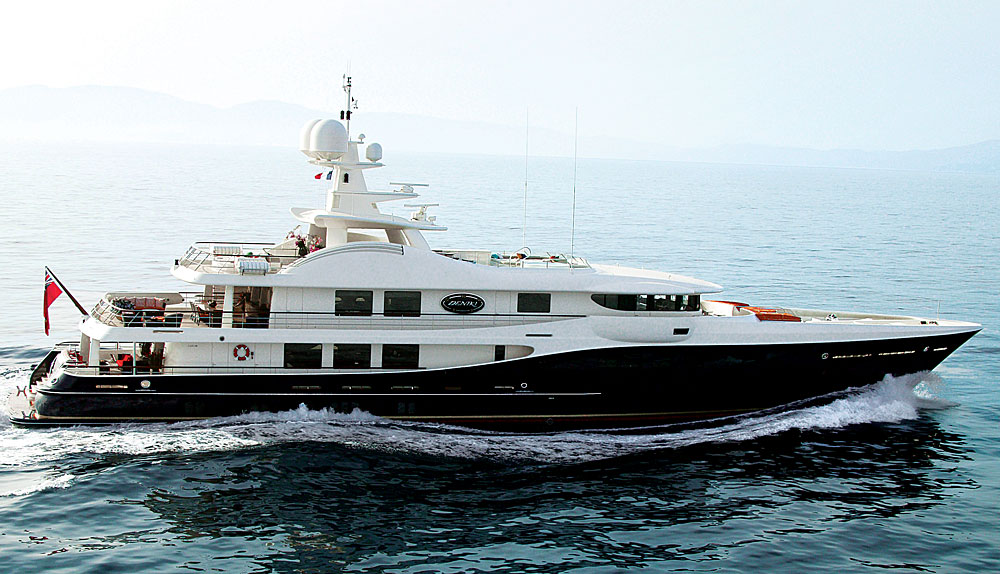 The 171-foot Deniki is the first yacht in the new 171 Limited Editions series from Holland’s Amels yard. In keeping with the relatively speedy construction possible with a semicustom build, the vessel took just 14 months to deliver. As of March, at least three other owners reportedly had signed contracts for the next yachts in the series. Amels expects to launch six 171s by the end of 2009.

The 171, which was designed by Tim Heywood and is based on Amels’ Lady in Blue custom yacht from 2004, has inched past the Westport 164 to become the largest semicustom design available—although it will be eclipsed by Amels’ 212 Limited Editions (also designed by Heywood), the first of which is due to launch in 2010.

Deniki’s interior started out as a light, airy design by Laura Sessa Romboli, whose work will be the basis for all interiors in the series. In the case of Deniki, however, the owner asked the designer who did his home, Peter Huevelmans, to customize the decor with darker, more extravagant detailing. Huevelmans employed cherry, ebony, beech, walnut, and oak and incorporated furniture and coverings colored in black and burnt orange. Loose furniture appears throughout the yacht, including a chair covered in faux leopard skin and others with Louis XVI styling. Deniki also has a striking dark-blue hull, whereas standard 171s will have all-white exteriors.

A master suite occupies Deniki’s main deck; the deck below holds two double cabins and a VIP cabin that can be split into two rooms. The yacht accommodates 12 overnight guests and as many as 13 crew.

It has been reported that last summer, during her maiden voyage to the Monaco Grand Prix, Deniki encountered two Force 7 gales with swells reaching more than 13 feet, and she rode them out with aplomb. Guests traveling in normal sea conditions should be more than comfortable thanks to Deniki’s zero-speed stabilizers.