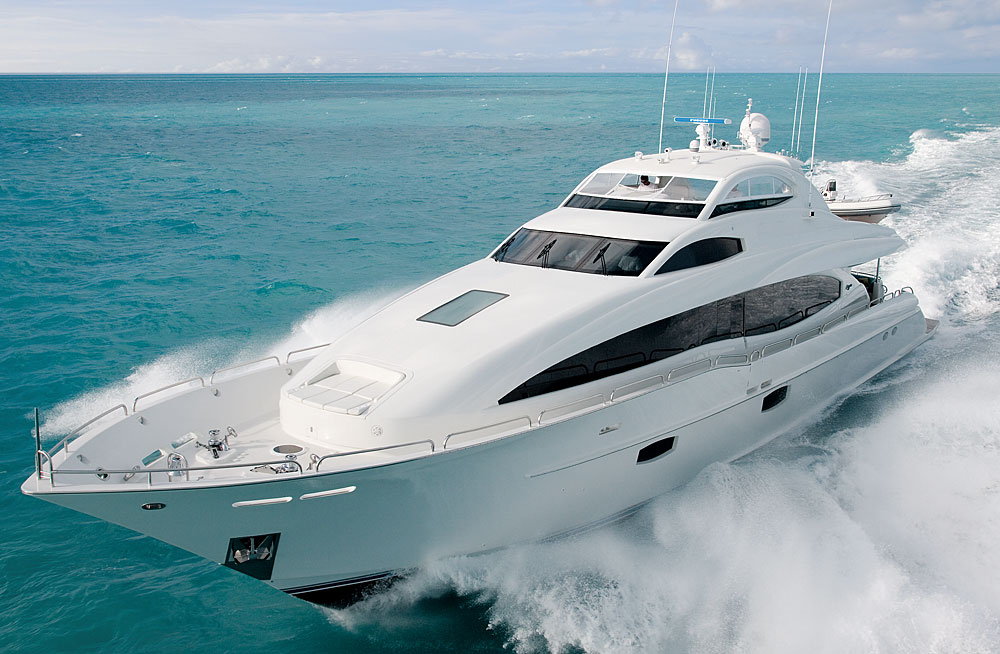 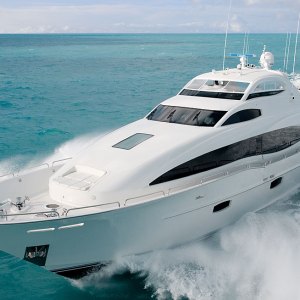 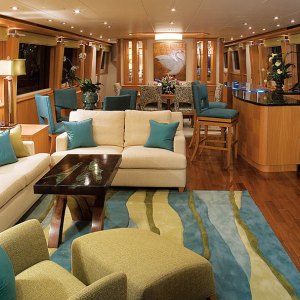 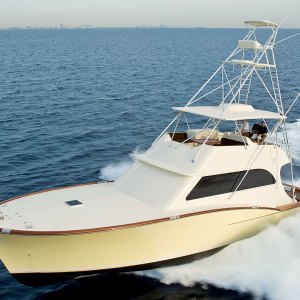 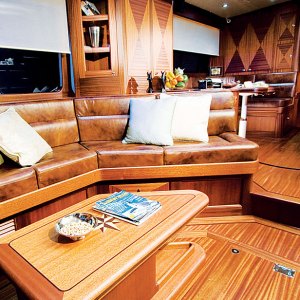 When boatbuilders use the term semicustom, they generally refer to a choice of interior decor options and possibly some predetermined layouts. A new 116-foot yacht from Lazzara takes this concept a significant step forward by offering custom features to accommodate a wheelchair. The $10.8 million Serenity, the first vessel in the Lazzara 116 series (813.835.5300, www.lazzarayachts.com), is an extended version of the Lazzara 110, with a longer swim platform and updated styling. The entire main deck, including the main salon, has a cherry floor—a better surface for a wheelchair than a carpet, the usual choice for large yachts—and a hydraulic chair runs the length of the stairway from the main deck to the guest cabins. There, the cabin closest to the stairwell features extra-wide doors, and another set of doors inside the room leads to a nurse’s cabin. Lazzara says that it is prepared to provide similarly dramatic customization for any 116 in the series, for a wheelchair or any other purpose.

The standard plan for this yacht includes a study on the lower deck, but Serenity’s owner converted the space into a children’s cabin with twin and Pullman berths.

The Vicem V63 Sportfish (954.713. 0737, www.vicemusa.com), like all yachts from this fast-rising Turkish builder of 52- to 105-foot vessels, is a study in fine woodworking. Whereas other makers fill their yachts with fiberglass, Vicem outfits its boats’ interior spaces in teak and mahogany.

Vicem’s $2.6 million sportfisherman made its U.S. debut in February. Stepping aboard the boat, with its walls and cabinets of Kyaha mahogany and its flooring of Ducia mahogany and teak, is like entering a gentlemen’s club.

The yacht is well-equipped for fishing, with such tournament-level features as a live-bait station, a freezer, a Pompanette fighting chair and pole holder, and an optional Bausch-American tuna tower. In keeping with Vicem’s styling, the boat’s fighting chair is made of teak. The builder says that it can launch about a dozen V63s each year.

The Tiara 5800 Sovran (616.?392.?7163, www.tiarayachts.com), priced at $1.7 million, meets the high standards of craftsmanship and seamanship for which Tiara has earned a reputation, while measuring 11 feet longer than any previous motor yacht from this Michigan builder.

The all-weather design of the vessel includes outdoor cockpit seating and a salon with an opening side window and a retractable sunroof. The cockpit and salon together provide a sizable entertaining area. The galley is on its own level between the salon and guest-cabin decks, accessible yet out of the way.

Owners can choose from among six sets of color-coordinated fabrics. Tiara also offers an optional third cabin that allows the yacht to sleep six people instead of the standard version’s five.

The Fairline Targa 44 Gran Turismo (954.525.7430, www.fairline.com) is the first of three Targa models the U.K. builder is introducing to the United States this year. The U.S. Targa line currently stops at 47 feet, but by the end of the year the company will offer 52- and 64-foot models that currently are available in Europe.

The 44 features a retractable roof, a nifty device that closes automatically when you remove the keys from the boat. The yacht is the first Targa to have a Volvo Penta IPS, which features a joystick steering control that allows you to move the vessel diagonally, sideways, and in circles more easily than you could with standard propulsion packages.

The relatively large aft cockpit has seating for six people, the maximum number that can sleep onboard comfortably. Part of the seating converts into a sun pad. With standard 370 hp Volvo Penta IP5500 D6-370 EVC diesel engines, the 44 Gran Turismo has a base price of about $875,000.

The 37.5-foot Sea Ray 350 Sundancer (800.772.6287, www.searay.com) is available with Mercury MerCruiser’s Axius, a docking system that the company debuted last year for its smaller, sterndrive-powered boats. The system uses a joystick that gives you precise steering control, making maneuvering in close quarters easier. The $320,000 vessel also has some clever features for making the most of the space on a boat this size. A seat unfolds alongside the swim platform for lounging, then folds back again when it is time to head home. The cockpit has a teak table that converts to a sun pad, and the boat’s helm and companion seats pivot to face people in the back.

Royal Denship is perhaps best known for its expedition-quality motor yachts as large as 282 feet. The Royal Denship 82 Open (+45.86.11.73.53, www.royaldenship.dk), the Danish builder’s first production vessel, displays a similar attention to craftsmanship. It is part of a new line that the company designed to appeal to buyers seeking smaller, sexier, and speedier vessels. With twin MTU M93 V16 engines, the $6.5 million yacht reaches a top speed of 63 mph.

The 82 Open, which reportedly is priced at about $7 million or more, accommodates as many as 10 people in four guest cabins and has quarters for two crew. Walnut floors and cherry woodwork create a warm ambience. In the cabins, guests not only can watch television, but they also can track the boat’s position on the TV screen. Outside, the boat has sun pads forward and a large dining area aft, and two separate stairways lead from the transom to the water.

The Ferretti Custom Line 97′ (305. 405.8710, www.customline-yacht.com) feels remarkably spacious, thanks partly to unusually large windows in its guest cabins. The $12.6 million, 97-foot vessel also has optional features typically reserved for megayachts, such as heated floors in the bathrooms and a Jacuzzi on the expansive sundeck.

The interior of the 97′ is elegant throughout. The galley is separated from the main salon instead of integrated into it, as with most boats in this size range. In an optional layout, you can combine two queen-bed cabins into a single VIP suite aft. The vessel sleeps as many as 12 guests in five cabins and provides quarters for six crew.

The 97′ was the largest Custom Line available before a 112-foot model was introduced in April.

The Azimut 47 Fly Bridge (+39.011.?93.161, www.azimutyachts.com), part of a line of yachts from 39 to 116 feet long, packs all the styling and construction benefits of the range’s larger models into a more compact size. This $1 million vessel is by no means small, however. It accommodates six overnight guests plus a captain, and it has a roomy main salon and top-deck seating for six. Large sun pads on the bow are bordered by railings that make them usable even at the boat’s top speed of 36 mph.

If you choose to operate this yacht yourself, the crew quarters can be used as a lazarette. The 47 does not feature Azimut’s latest technological advance, a gyro-stabilization system that significantly reduces rolling at sea, but the system will be available on the builder’s 58 Fly Bridge, which will arrive stateside in August.