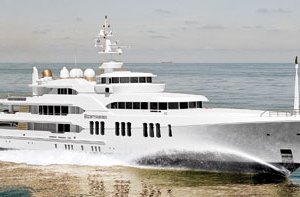 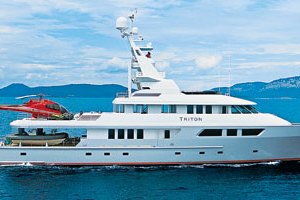 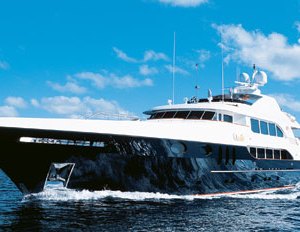 As rarefied as the world of luxury yachts is, the products often share a similarly conservative design. Granted, the laws of physics apply to all vessels equally, and certification boards and insurance requirements apply their own pressures to conform. But the primary reason for this uniformity is that the vast majority of boaters are content with evolutionary, rather than revolutionary, change. To absorb huge costs for R&D that reshapes the yacht design envelope and to build what is essentially a prototype—one that might be knocked off as quickly as couture fashion is—requires from the yacht owner bold vision, self-confidence, and a sportsmanlike willingness to roll the dice. However, the smart gambler knows how to improve his odds, and in the yachting realm, this involves building with the firm that has the best track record.

Although he possesses one high-speed yacht (the 53 mph, 161-foot Sussurro) and a very large motor yacht (the 18 mph, 377-foot Pelorus), this European owner was determined to have a vessel that featured both velocity and luxurious living accommodations. The Netherlands’ Feadship brought its considerable talents to bear on the project, creating Ecstasea, its largest yacht ever, a 282-footer that exceeds 37 mph and can land two helicopters simultaneously. The yacht’s 33,000 hp powerplant includes four MTU 16-cylinder engines coupled in pairs to variable-pitch, four-blade propellers and a gas turbine engine powering the largest waterjet ever developed.

A helicopter hangar concealed in the bow houses the owner’s Eurocopter 135 with its blades folded. For takeoff and landing, two large sections of the foredeck coach roof slide apart and the helivator rises from its climate-controlled bay. A second helicopter landing pad for guests is located aft.

Despite her size and technical sophistication, Ecstasea is a family boat, with just four guest staterooms, a pair of suites for children, and a nanny’s cabin. Mom and Dad have their own private deck with an observation lounge, gym, sauna, and spa. The yacht’s decor, designed by Britain’s Terry Disdale, employs natural materials and subtle layers of texture, creating an elegant yet relaxed look that is reminiscent of a home in Bali or Barbados and perfectly suited to the yachting life. Disdale’s use of found objects, artifacts, and antiquities as decoration is brilliant; nothing inspires conversation like the artful juxtaposition of a 40-million-year-old fossil collection on a state-of-the-art yacht.

Having circumnavigated the globe five times in a 97-foot sailing yacht, a family chose to build the expedition yacht Triton for their sixth voyage around the world so that they could carry more accessories and enjoy longer stops in remote locations. At 163 feet and with 500 tons of displacement, the Delta Marine vessel is the largest composite yacht ever built in the United States. In addition to a helicopter, the yacht carries a 25-foot Willard fishing tender that is towed alongside the mother ship when the family is hunting game fish. The angler trolls from the comfort of the yacht’s cockpit, and after hooking a fish he can cross from Triton’s swim step onto the fishing boat without ever slowing down or relinquishing his grip on the pole. The yacht’s ample interior includes a three-room master suite on the main deck. The social center is the brilliantly conceived upper deck, which offers a 360-degree view. Enclosed by sliding glass panels, the entire area also can be opened to the breezes.

Trinity Yachts began building the 157-foot Janie for NASCAR team owner and Charlotte, N.C., resident Rick Hendrick and had made considerable progress with the project when Tennessee yachtsman Allan Jones lost his 135-footer in a fire. Recognizing the potential for a win-win situation, Trinity, a New Orleans builder, offered Hendrick a build slot on a larger model. Hendrick accepted and then sold Jones the nearly complete semidisplacement vessel, which precisely fit Jones’ needs.

A pair of Caterpillar 3512s generate 2,250 hp each and move Janie at speeds as fast as 25 mph. On a single fill-up (16,750 gallons) she can cruise for 4,000 miles at 14 mph. Three striking features will distinguish Janie amid any fleet: her gleaming navy-and-white livery (many boat builders discourage owners from ordering dark hulls because such colors can reveal imperfections), her chrome-filled engine room customized by Hendrick’s racing team, and her over-the-top interior by Scott Carpenter, who designed for the saloon a coffered ceiling that supports five alabaster chandeliers.

With a contract calling for an 18 mph cruising speed, a 6,000-mile range, room for a substantial crew, a private duplex owners’ apartment, a professional dive center, the ability to remain at sea for a month, low environmental impact, minimal noise, and maximum stability, a builder hardly could be faulted for delivering a yacht that was more utilitarian than luxurious. Yet the 200-foot Phoenix, built by Lürssen Yachts in Germany, is as beautiful as she is technologically advanced.

Her slightly masculine, French Deco–inspired interior is fashionably Americanized. This theme is particularly apparent in the upper saloon and theater, where designer Andrew Winch installed a 12-foot vaulted ceiling, glam stainless steel decorative hardware, and gleaming ebony cabinets, one of which conceals a 60-inch plasma monitor and a Linn audio system. Forward, the owners’ office has 180-degree views and overlooks a private deck. A staircase descends to their enormous stateroom, where separate marble baths and dressing rooms are hidden behind a wall bearing a gold-leaf mural. “Few clients would encourage their design team to explore design to this level,” says Winch, “and still fewer shipyards could comply.”