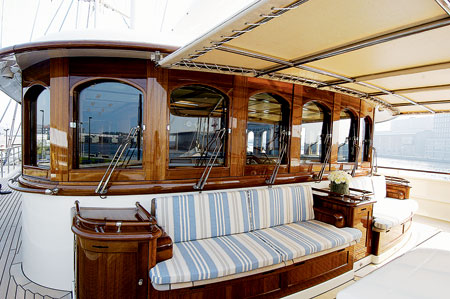 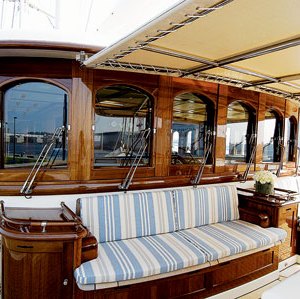 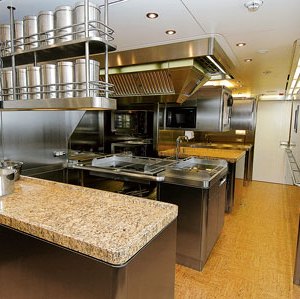 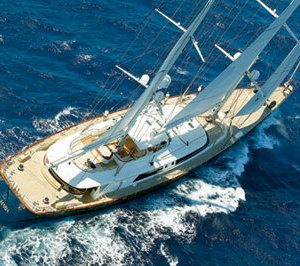 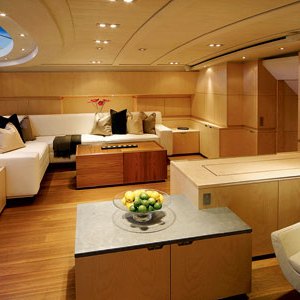 At 295 feet overall (260 feet on deck), Athena is the largest private sailing yacht of the modern era and the largest all-aluminum yacht, having been constructed entirely of Alustar, a high-tensile aluminum alloy that offers a greater strength-to-weight ratio than standard aluminum. Nevertheless, this giant still displaces a staggering 1,177 tons. Her three masts stand 197 feet above the deck and unfurl 28,632 square feet of sail, enough to drive her to speeds faster than 23 mph.

At first glance, Athena, which was built for software entrepreneur Jim Clark, resembles a museum piece from the early 20th century, but she is hardly a relic. Indeed, with a modern keel underbody and twin 2,000 hp diesel engines, she is a technological marvel. The shipyard even had to be enlarged to accommodate her, and a lock was widened so she could reach the sea.

Athena is Clark’s second yacht from the Royal Huisman Shipyard in the Netherlands; the first was the 156-foot Hyperion, a performance sloop that revolutionized the role computer servers play in monitoring yacht systems. Clark was less than halfway around the world on Hyperion when he began contemplating a larger yacht, one with a library, a theater, a gourmet galley, more guest quarters, and a proper dive locker. Athena has all of these amenities and more.

The main deck features a climate-controlled dive center that leads to a lower-deck tender platform for easy access to the sea. Because Clark plans to cruise and dive remote areas of the Indian and Pacific Oceans, within the yacht’s lazarette is a one-man decompression chamber for stabilizing a diver should he become stricken with the bends.

For far less serious purposes, Athena has a 400-title film library and satellite TV that are accessible to the 60-inch plasma screen in the bridge deck lounge and the vessel’s many other monitors, as well as 2,500 music CDs, all stored on a 4-terabyte server.

Twenty-two crew members, including a captain and a sailing master, operate the vessel and cater to the Clarks and as many as 10 guests, whose spacious cabins are aft on the lower deck. The owner’s suite is full-beam and incorporates an office/lounge, as well as a stateroom, a dressing room, and an enormous bath.

A magnum opus for her builder, Athena is the final yacht to slide down the ways before the death last December of Wolter Huisman, dean of the Dutch builders.

The first of the builder’s new aluminum 56-meter (184-foot) series, Santa Maria has many of the modern features that characterize the yachts built by Italy’s Perini Navi, including the flying bridge and fold-down hull platforms for water access. But like every Perini, Santa Maria also has custom features, and among these is a bow that has been raised slightly to accommodate twin Castoldi 16-foot jet tenders, which are stored inconspicuously in enclosed bays. The upper deck is also longer than those of any of her sisters, providing room for a sophisticated helm station, sun beds, and a Jacuzzi, and increasing the size of the covered open-air saloon on the main deck below.

Forward of the saloon is a dining room to starboard and a den to port. A staircase of residential proportions descends to five staterooms. The crew areas, including the wheelhouse, are completely segregated from the owner areas.

Translated roughly from Swedish, Gimlä means “seventh heaven,” the destination to which this yacht will transport you. Designed by Ed Dubois and built by the Netherlands’ Vitters Shipyard, this 140-footer is the best of this year’s class of performance cruisers. She has a fine entry, a deep and narrow fin keel, an uncluttered foredeck, and a sleek, low coachroof with wraparound windows that bathe her split-level living areas in daylight. While Vitters has built two previous yachts to the same dimensions, Gimlä is a standout for her stunning, contemporary, rotary-cut matte birch interior accented with brushed stainless steel bands and natural teak. The joiners’ attention to detail in lining up all the wood grain in a single direction is a triumph of the art. The layout is refreshing: Instead of the corridor to the staterooms ending at the door to the owner’s cabin, this one leads to a second set of stairs that takes you to the deck. The owner’s spacious cabin is on two levels portside and includes a sauna.

The first privately owned sailing yacht with a helipad, the 178-foot Tiara has introduced a wealth of new possibilities for owners who are fond of air tenders. To prepare for the aircraft’s landing, the vessel’s running backstays are eased forward and the huge stainless steel rams that provide tension on the backstays are unpinned and lowered to the deck. With the boom pulled out to the side and the aft railings removed, the captain turns on Tiara’s landing lights and brings the bow into the wind to await the helicopter’s arrival. The helipad may be Tiara’s most notable feature, but the boat, built by New Zealand’s Alloy Yachts, offers much more to its owner and passengers. She has a duplex owner’s apartment amidships with beautiful mahogany joinery, a formal dining room for 12, two fireplaces, a protected alfresco saloon for lounging or dining, four guest cabins, an outdoor cinema, and a flying bridge with a pair of treadmills and a TV hidden under the sun pads.