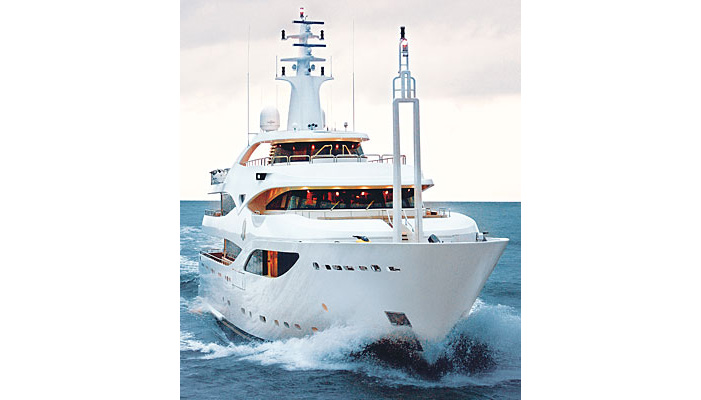 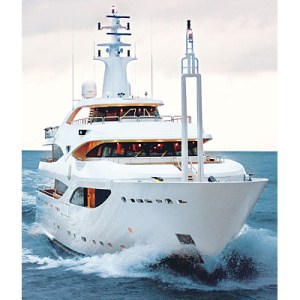 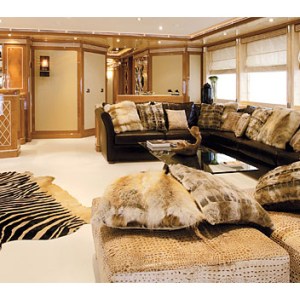 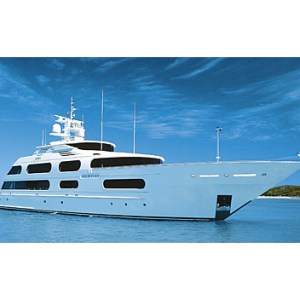 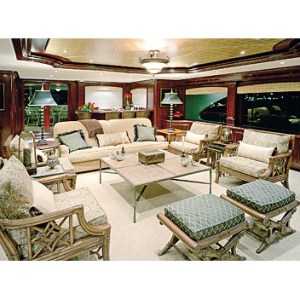 As impressive as helicopter pads might look in brochures, charter guests seldom require them. Therefore, when the owners of the 234-foot Feadship Utopia refit their yacht, they made better use of the space that used to accommodate their aircraft. De Voogt Yacht Services connected the former helipad to the aft portion of the bridge deck with a staircase, creating a two-tiered lounging area. The top deck features a large hot tub, while the bridge deck sports sunbeds with twin dining tables. The new design will provide a spectacular area for sightseeing as Utopia cruises off South America beginning this fall. The yacht, which is managed by Edmiston & Co. (310.777.6535, www.edmistoncompany.com), accommodates 12 guests and a crew of 16. It charters for a base weekly rate of about $600,000.

The master suite in the new 178-foot CRN Ability includes a private balcony, a feature that has never before been incorporated into a yacht’s design. It is an ideal spot for sipping morning coffee, and through the sliding glass doors that lead to the balcony, you can enjoy a view of the Mediterranean (in the summer season) or the Caribbean (during the colder months) while lying in bed. Ability, which accommodates 12 guests, is managed by Nigel Burgess (+44. 20.7766.4300, www.nigelburgess.com). It is available at a starting rate of about $266,000 per week.

Only recently have charter yachts begun to tow substantial tenders that are included in their base rates. The 157-foot Trinity Mustang Sally offers one of the more impressive of these boats, a 32-foot Intrepid center console. On board the yacht, you can watch satellite television on large plasma screens in both the main salon and sky lounge. Gamers can log on to web sites via high-speed Internet, while those with a sense of nostalgia can play Pacman, Donkey Kong, or Galaga on the sky lounge’s MultiCade machine. You can charter Mustang Sally, which accommodates 10 guests and eight crew members, for a beginning rate of about $165,000 per week. Available in the Mediterranean during the summer season and in the Bahamas at other times, she is managed by Merrill-Stevens (954.791.2600, www.merrillstevens.com).

The 160-foot Delta motor yacht Newvida offers 24-hour room service at the push of a button. A Crestron Concierge System not only allows you to control a massive database of music and movies, but also connects you to the crew quarters at all hours. Newvida, which accepts as many as 10 guests, is managed by Fraser Yachts Worldwide (954.463.0600, www.fraseryachts.com) and charters for a weekly base rate of about $335,000. She is one of the few luxury motor yachts available this summer in the eastern Mediterranean off Croatia, an increasingly popular cruising destination.

The new 99-foot catamaran Allures does just that. The vessel, built by Composite Works in France, features a master cabin on the main deck, along with two double-berth and two twin-berth cabins. Each of the twin cabins converts to a double, so the sleeping arrangements can accommodate either adult couples or a family with children. Allures has space for five crew members, who serve as many as eight guests, allowing for a level of service beyond what you typically find in monohulls of this size. The yacht, which is managed by Camper & Nicholsons (+377.97.97.77.45, www.cnconnect.com), cruises the Mediterranean in the summer and the Caribbean during the colder months. The base rate for charter is about $76,000 per week.