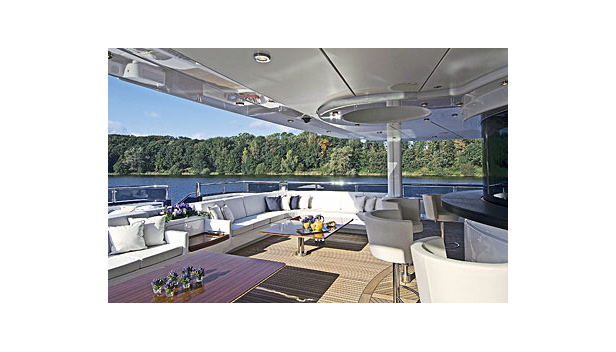 The 220-foot Nobiskrug Triple Seven (+49.4331.207.221, www.nobiskrug.com) is an astonishing boat, especially considering that the German commercial builder had completed only one other custom yacht and one refit before delivering it. But the yard encountered the owner of a 180-foot Oceanfast who was looking to step up and step out—into the sun—and Nobiskrug accommodated his desires beautifully. The fourth deck is open to the sky and sea, and the windows of the main-deck master suite notch into the overhead to usher in maximum light. Newcruise Design created the hull lines and the spare but comfortable interior, which accommodates 12. The yacht exploits the strength of its steel hull to allow roomy, unobstructed interior spaces and an organic free-form design. Amenities include a waterline-level swim platform, an indoor/outdoor salon bar, an outdoor cinema, and a helipad. The $50 million yacht cruises at about 17 mph.

When experienced yacht owners Doug and Linda Von Allmen of Fort Lauderdale, Fla., toured Lürssen’s 192-foot Capri at the 2003 Fort Lauderdale International Boat Show, the German builder was designing a 164-foot semi-displacement vessel for them. But after viewing Capri, they wanted a bigger boat. “I asked if they would transfer my deposit to a near sister ship to Capri,” Doug recalls, “and when [managing director] Peter Lürssen said ‘yes,’ we began detailing a completely new project.” That project would become the Lürssen Linda Lou (+49.421.6604.166, www.lurssen.com), a spacious 197-foot yacht with an enormous 37.5-foot beam. Each of the boat’s salons has multiple seating areas so that different groups of people can socialize separately but in convivial proximity. Lavish onyx-topped bars are low enough not to dominate the rooms or obstruct the views. French designer François Zuretti used pear, bubinga, lacewood, and additional exotic woods to create a light and airy interior that is enhanced by elements from modern art and Art Deco. For entertaining, Linda Louoffers numerous outdoor spaces and a sky deck—part observation lounge and part dining salon—that becomes a breezy veranda when the fore and aft windows and doors are open. The estimated $70 million yacht has a range of about 5,750 miles.

The Burger Boat Co., which produced primarily 60-footers in the 1970s and had upgraded to 100-footers by the 1990s, was planning eventually to build 140-footers when co-owner and CEO David Ross received a request from a Middle Eastern family for something a little larger. Predictably, the 144-foot Burger Boat Co. Mirgab V (920.684.1600, www.burgerboat.com), which debuted at the Monaco Yacht Show last September, presented an entirely new challenge for the company. Nevertheless, Ross notes with pride, his team completed all of the design and engineering work in-house. Project manager Mike Donovan reports that building the $35 million trideck vessel, with its 28-foot beam, more than 8,000 square feet of interior space, and 392 tons of displacement, involved about the same amount of work as “building a pair of typical raised pilothouse yachts simultaneously.” The vessel’s amenities include a fold-out veranda, an elevator, and a skylounge cinema. The interior decor and stonework display classic European influences such as symmetrical furniture arrangements, arched doorways, and fluted columns in a palette of creams and gold.