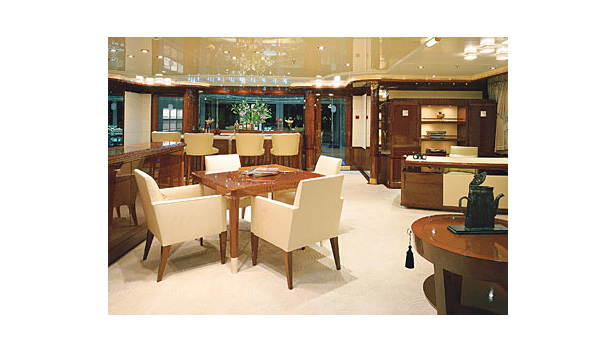 The 213-foot Ambrosia III, completed last May, is the most technologically sophisticated Benetti ever and perhaps the most advanced yacht delivered by any yard in the past year. The six-deck, steel-and-aluminum vessel, built by the Benetti Darsena shipyard in Viareggio, Italy, is the company’s third-largest craft, behind the 282-foot Kingdom and the 230-foot Reverie. It was built for Hong Kong industrialist Ambrose Young, whose last two yachts of the same name also were made by Benetti.

Ambrosia III is driven by diesel-electric power and compact Azipod propulsors, an efficient system similar to the type found on larger commercial vessels. The four diesel engines do not turn shafts or propellers, but instead generate electricity, which meets the house demands (while transmitting almost no noise to the living accommodations) and powers two 15-ton Azipods jutting below the hull. A computer synchronizes the steering, which, when tied to autopilot and the bow thruster, can keep the yacht on station without anchors or crew intervention. The vessel, which is estimated to have cost $60 million, has a range of more than 8,000 miles.

Stefano Natucci created the fetching, contemporary exterior profile, with its long sweeps of black glass windows. François Zuretti’s interior is a spare-no-expense melding of Art Deco themes and modern classic styles tempered with European sophistication and splashed liberally with red, a color the Chinese associate with good fortune. Designed as a primary residence, the vessel features a remarkable number of cozy rooms and deck areas in which to work, relax, or entertain, rather than the huge multipurpose spaces that her 41-foot beam could have afforded.

Unique touches include a gold staircase wrapped in a mural that winds through three decks and a marble-floored dance area in the salon. In a dining area called the Stargate Room that overlooks the aft bridge deck, a round disk in the ceiling above a circular table features hundreds of fiber-optic lights twinkling in the patterns of the constellations. Electric motors linked to Ambrosia III’s GPS system rotate the disk to match the placement of the real constellations relative to the yacht’s position.