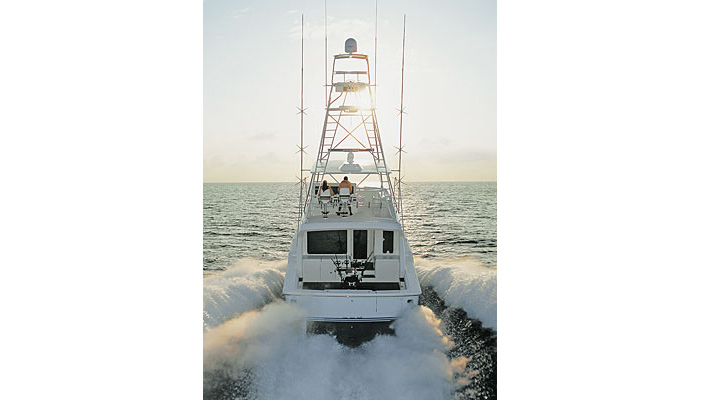 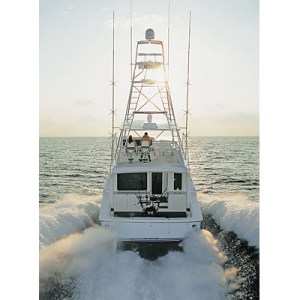 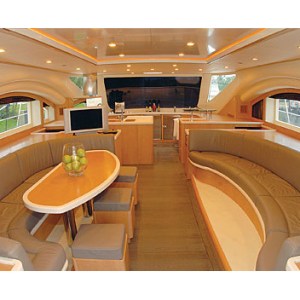 Considerable out-of-the-box thinking went into the Lazzara 75 LSX Quad (813.835.5300, www.lazzarayachts.com). In a unique configuration, four Volvo Penta IPS 600 engines, aligned across the stern, deliver 2,400 hp to eight counterrotating, forward-facing propellers. Using a joystick, you operate the propulsion units in unison, experiencing a degree of maneuverability that no other shallow-draft vessel offers. The European-style exterior sports the builder’s familiar swooping line and teardrop windows. Sunpads are situated forward and aft, and port and starboard transom stairs lead from a large teak aft deck to a wide swim step. The salon overlooks the galley and dinette on the lower deck, creating a dramatic mezzanine effect. The four en suite staterooms, all with flat-screen TVs and iPod docks, sleep eight. The yacht, which reaches a top speed of 40 mph and has a 460-mile range at 36 mph, has a beginning price of about $3.6 million. —Bill Ando

The first of Azimut’s S series of open yachts, the 86S, which debuted in 2004, was distinguished by the shark fins of the vessel’s superstructure and the six portlights on either side of its bright red hull. In 2006, the company debuted a midsize sibling, the Azimut 62S (+39.011. 93.161, www.azimutyachts.com), which features improved amenities and a remarkable use of space. The 62S still has the company’s trademark patch of windows in the master suite, with the bed situated to take best advantage of the view, but now the VIP suite in the bow has similar windows. In lieu of a high forward berth, which can be difficult to get onto, the VIP suite has freestanding twin beds that follow the angle of the hull and that can be swung together to create a queen-size berth. And instead of a bunk cabin that only children could love, the $2.1 million 62S has a cozy lower lounge opposite the galley. Topsides, the open-plan salon seamlessly melds with the aft deck lounge.  —Marilyn M. Mower

The original Bertram 630 (305. 633.8011, www.bertram.com), unveiled in 2004, offered superior maneuverability, easy access to the bridge, and efficient hull lines that left a small wake while the boat was either at speed or trolling. Now the company has introduced a powerful upgrade that features 1,825 hp MTU Common Rail diesel engines and mezzanine cockpit seating that offers a better view of the fishing action. The $2.6 million yacht is available in open or enclosed flybridge versions and with three or four staterooms. —Marilyn M. Mower

The Hatteras 60GT Tournament Edition Convertible (252.633.3101, www.hatterasyachts.com) calls to mind the adage “Dance with the one who brung you.” The original Hatteras, a 41-footer that was introduced in 1960, ushered in the era of large, powerful fiberglass sportfishing boats. Over the years, the company has paid more attention to the luxury features of its yachts, but with the 60GT it has returned to its original focus. With a resin-infusion constructed hull, the 60GT is a strong, light, and extraordinarily fast vessel. Twin 1,800 hp Caterpillar C32A engines produce a cruising speed of 40 mph and a top speed of 46 mph. The 19-foot beam provides plenty of room for both of the big powerplants and a mezzanine deck in the cockpit. The 60GT, which is priced at about $3 million, has a three-stateroom, two-head interior layout. —Marilyn M. Mower

The Ocean Alexander Veloce 54 (954.779.1901, www.oceanalexander.com), the flagship of the company’s new Veloce line, has a complete range of megayacht features, yet an older couple or a family with young children would have no difficulty operating the boat without a crew. Ocean Alexander excels at structural engineering and interior finish, and the Veloce 54 displays that expertise. The main salon and atrium-style galley are unencumbered by structural supports for the flying bridge, while the three-stateroom interior features exotic gloss-finished burls, Japanese Sakura joinery, cedar-lined closets, and leather overheads. The interior’s palette of taupe tones showcases the large windows, and wood flooring in the galley and teak on the swim platform add the right nautical grace notes. The fiberglass hull, with its 15.5-foot beam and modest 4-foot draft, is the same proven, efficient design that Ocean Alexander used for its 52 Sedan, which debuted in 1998. Two 720 hp Yanmar engines power the Veloce 54, which is priced at just over $1 million.  —Marilyn M. Mower

The Sea Ray Sundancer 55 (865.522. 4181, www.searay.com), which debuted at the Miami International Boat Show in February, has been described as “part prom queen, part big-time bruiser” by Sea Ray Yachts vice president Rob Noyes. This tough-as-nails beauty, which comes equipped with twin MAN CR 800 hp or 900 hp diesel engines that push the vessel to a top speed of 38 mph, has a beginning price of approximately $1.5 million. The boat features the sleek interior and space-utilizing layout that are characteristic of European watercraft, yet it also will appeal to American sensibilities, owing to such elements as customizable carousel-style cockpit seating. This design innovation allows you to move two sets of seats on circular tracks around a dinette located in the forward cockpit. You can face the seats forward while cruising or face them aft during cocktail hour, to ensure excellent views any time of day. Additional notable features include two retractable cockpit sunroofs and a full-beam master stateroom with a cozy dinette area.  —Risa MerlThe original 44-foot Midnight Lace created a firestorm when she debuted at the 1978 Fort Lauderdale International Boat Show and elevated her designer, Tom Fexas, to icon status. Bigger and smaller versions followed, each blending the performance of a PT boat with the elegance of a commuter. In 2003, Fexas reworked the design for Taiwanese builder Jack Chen, widening the beam by a whopping 42 inches, adding more horsepower, and creating a larger flying bridge. The new lines caught the attention of Fexas’ longtime friend Mike Joyce, the owner of Hargrave Custom Yachts and Colonial Yacht Sales, whose interior designer, Shelley DiCondina, maximized the boat’s interior volume and created a modern, luxurious look. Hargrave’s Midnight Lace (954. 598.0100, www.hargrave.org), Zorro, a 52-footer that debuted at the Miami International Boat Show in February, is a fitting tribute to Fexas (who died in December 2006) and the beginning of a new product line for Joyce. The $1.45 million yacht sports an amazing four control stations: in the flybridge, aft cockpit, bow cockpit, and interior. A pair of 715 hp Caterpillar C-12 engines drives her to a speed of 32 mph. The vessel has two or three staterooms and an atrium-style galley finished with superb joinery and topflight appliances. —Marilyn M. Mower

The BRB PC 62 (305.537.0172, www.brbyachts.com), built by Italy’s V.G. Shipyard Yacht, offers all the benefits of a catamaran, including ample space and stability—both at anchor and under way—but the catamaran also has a unique deck plan. In addition to walk-around side decks, the vessel features port and starboard stairs that follow the arc of the cabin trunk, connecting the bow to the cockpit. The helm is located on the flybridge, but the boat can be reconfigured to include an interior wheelhouse. The interior also can be redesigned to transform the two standard staterooms into a single owner’s suite. The $2.25 million catamaran, which has a shallow, 3.3-foot draft, cruises comfortably at 23 mph and tops out at 26 mph. A 14-foot tender stows beneath the aft deck. —Bill Ando