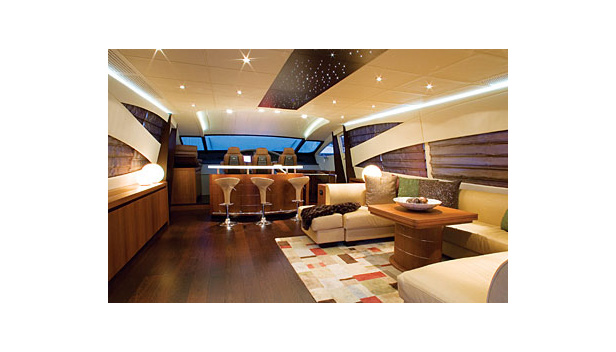 With these boats,” Tilli Antonelli says of the sport craft from Pershing, the company he cofounded in the mid-1980s, “one must show off a little.” Indeed, the boats show off Antonelli’s distinct styling—most notably the eye-shaped windows and silver livery—and his engineering expertise. (He was among the first sport-boat builders in Europe to use hydraulic gangways and also one of the first to install a sliding soft top.) Antonelli’s latest innovation is a Pershing 90 reconfigured for North American customers. When Pershing originally introduced the boat in 2005 in Europe, it featured a sweeping profile and spectacular performance, but the interior was deemed too crowded for American tastes. So with input from the company’s U.S. distributor, MarineMax, Antonelli and designer Fulvio de Simoni reinvented the boat.

The U.S. version of the Pershing 90, which has a base price of about $10 million, features a spacious entertainment lounge on the lower deck. The lounge separates the master suite, located aft, from the twin cabin and the VIP suite. The air-conditioning has been upgraded for tropical climates, and all of the electronics and appliances are made by well-known brands and can be readily serviced in the Western Hemisphere. Sun lounges are positioned on the foredeck, aft deck, and flybridge.

In the master suite, the queen-size bed is cantilevered at an angle from the port side. In the morning, you can push a button to lift the head of the bed and slide the mattress toward the wall to create more floor space. Shoji screens form a partition between the bedroom and the bathroom areas.

The main salon features a large seating area. A marble-topped bar with leather-covered stools creates a subtle divide between the salon and the open pilothouse, which is one step higher than the main deck. Arneson surface-piercing drives, powered by a pair of 2,435 hp MTU diesel engines, propel the 90 to a top speed of 50 mph.